Just in time for this weird and spooky time of the year, a super-scary squirrel has surfaced in our neighbourhood. Every night my friend Sandy keeps putting out pumpkins - some of them as big as 6lbs - in her porch display... to find they have been eaten through by the following morning. Day after day. Poor Sandy is running out of patience and pumpkins.

This afternoon I drove around and caught sight of the culprit - a squirrel. Not a big tubby guy, but actually a quick-as-you-can chap who was munching with all his might, then scarpered up into the trees.

I would write about what my kids are wearing tonight but they are actually cast to the four winds. Harley, 14 and Jackson, 12, took off with their friends after school and we won't see them until the end of the night. Think Harley is some kind of Hawaian-shirt guy, Jackson is building something with his friends from boxes, Tallulah is a vampire soccer player and was in two minds about me coming along. Cy (aka Bart Simpson) is trick or treating with his mates.

So after years of Halloweens, driving them around to parties and parades all day, being subjected to equal measures of sugar highs, meltdowns and costume dramas, I now find myself slightly redundant. Halloween still kills me though -  you're smiling all day as a gorilla opens your car door at school, Spock drops his kids off next to you, an I-phone walks past with two Dead Riding Hoods and crazy bunnies pack your groceries.

Speaking of pumpkins (as you do) most are not that great to eat. Butternut squash is way better. It's about time the Idle Hostess (moi) shared another of her recipes. I make this so often there are groans (and not of delight) from my guests when I bring it out. New recipe or new friends required - what do you think? 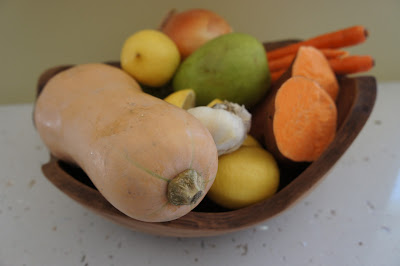 2. Chop veges and pear into big slices or chunks (You have to say "choonks" with a Mancunian accent just like my Grandma's) or slices. Butternut squash and kumara are a bugger to peel so buy the pre-prepared bags from Trader Joes. Failing that, leave the skin on - the meal becomes a fabulous interactive experience for your guests. My guests also compete for how many produce stickers they can find in the dish.

3. Squeeze loads of lemon all over it, glog a log of oil, salt and pepper and put in oven at 250C for three hours (or just blast it at 350 if you can't be arsed hanging about)


The pears, oil and lemon make a goopy syrup and cooking whole garlic cloves produces a sweet paste you can push out with your knife. If you've made too much, whack it into the cuisinart next day and heat with a dash of milk for a great soup. 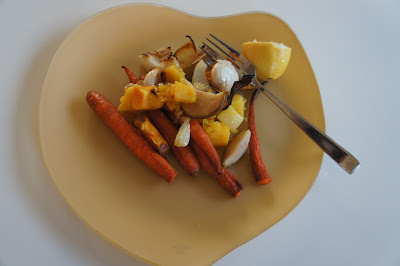 Or...just leave it out for Sandy's squirrel.
Posted by About Last Weekend at 9:30 PM