He learned to memorise through the Maori tradition of singing and story telling and almost never takes notes. His first language is Maori and he learned English at four years. At 12 he began his first university degree, at 14 he googled "international politics'' and "education" and he came up with "Yale University." He applied to the Yale summer semester programme at age 15 and was accepted last year at the age of 16.


Who is this boy? His name is Ngaa Ruuira Pumanawawhiti and his journey to Yale is the subject of my sister Pietra's latest documentary, Maori Boy Genius. 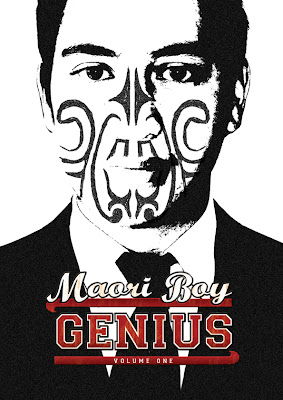 Ngaa posses such evident spirituality and charisma that watching even footage of him is strangely moving. You find yourself close to tears. Among his people he is being hailed as a new leader for our confused and troubled age, a visionary who can directly tap into the wisdom of his ancestors.

Ngaa was born in the small coastal New Zealand town of Otaki. He has lived with his retired grandparents (his grandfather worked on the railways and his grandmother was a prison nurse) since the age of eight (customarily the eldest child in a family is given to their grandparents) while Ngaa's five siblings stayed with his parents.

Surrounded by his "iwi" (tribe) he has been educated in the Maori tradition where knowledge is passed down through story telling and songs. That means he seldom takes notes - he simply reads or listens and recites. Ngaa says: "We learnt songs, we learnt dances about everything like fishing. How can you go fishing if you don't know where the fish are? A song will tell us how to look for the fish and we would sing it as we went fishing."

He's also a goofy, gangling 16 year-old Maori boy who loves to hang out with his mates; watching his best friend Riwai -  already a dad at 17 -  practise his old school popping-and-locking dance moves, eating meat pies in his friend Daniel's car and discussing girls.

"His interest is human rights,'' his mother Maakarita says: "He's been talking that way since he was 10.'' But his life is not buried in books or the internet: ``He's still a typical teenager, and he likes to be with his mates.''

In April I saw Ngaa perform the Haka in the Te Hui Ahurei of Tuhoe, an annual festival. It had taken all night to draw the tattoos (ta Moko) on his and his group's faces and bodies. Ngaa has also smudged his face to try and reflect the environment and look like the bush as his ancestors had done. "He's different that one" said one of his elders.
For the past two years Pietra has filmed him with his friends, travelling to Yale (for the summer semester programme) and back again to his family. "There is always the time during the filming process when you know your subjects are sick of you, sick of the camera and wished they'd never agreed to be filmed, exposed, prodded. Ngaa and his family never gave me that impression - they believed that me and my crew were part of Ngaa's kaupapa - or journey - and were committed to the film, because in the end, as he says, this educational/future leader journey is not for him, it is for his people, to bring them out of poverty."


"But please don't think this film is all worthiness" Pietra says: "there is a lot of laughter, especially hanging out with his mates, and a lot of tears when his 5th sibling is born with the whole family around and Ngaa is handed her to be named, and in his extraordinary relationship with his grandfather."

At a time when a survey of teens just voted spray-tans and the iPhones as the top inventions of all time, Ngaa is passionately political. One look at his Facebook page tells how he champions the rights of the oppressed including his own people who were ousted from their lands, introduced to cigarettes and alcohol and banned from speaking their own language. Today a high percent of young Maori men drop out of High School and end up in prison.


Ngaa's name is based on an old tribal (Tuhoe) saying: “He uira ki te rangi he tauira ki te whenua....Like lightning in the sky, here is an example on earth.”

But it is Ngaa's grandmother who gently notes: “He’s a Matakite, a Wiseman. But he's also a boy."


The television documentary version of Maori Boy Genius will be screened on Maori Television in New Zealand on Sat November 12 at 8.30pm and repeated Sunday November 27 at 6pm.


P.S. Pietra just emailed me. She is in Copenhagen working on the fine cut of the feature length of this documentary. Molly Stensgaard, - the renowned editor of Lar von Trier films including Cannes winner Dancer In The Dark and this year's Melancholia - has offered to help her with the editing. I'll keep you posted as to when the feature length documentary will appear in film festivals, theatres and on DVD.


Our Giveaway this week is a traditional Maori Pounamu (Greenstone) necklace, worn by both men and women in New Zealand. To enter simply become a follower and leave a comment. An extra point for each if you Facebook and-or Twitter this offer. I have pictured just two styles - but the winner will have the pick of any of these eleven carvings. Winner will be drawn randomly Friday 11 Nov.


Posted by About Last Weekend at 2:10 PM