We've just had a fashion shoot at our house. My friend Lesley, whom you might have met here, was taking photos for her spring collection. Last shoot we were away, so this time I hung around to make a nuisance of myself (best boy fetcher anyone?) and watch the magic unfold....

Below is model Alexis arriving at 8am, meeting Tallulah,10 and Cy, seven. She was so natural and so sweet to the kids, giving them a hug at the end of the day.

Here she is after one hour of hair and make up...

Alexis arrived sans make-up in an striped XL t-shirt and two-toned Doc Martins from a charity store, worn with thick oatmeal tights and a fringed leather jacket. She told Tallulah and me that she was going through a Japanese street-fashion phase. Alexis was discovered in a coffee shop in LA where she was singing with a punk band and she was immediately cast for the Janice Dickinson reality show.

She is 5.8ft and naturally an "athletic size two" which is good for California as well as Miami and Istanbul where apparently they like you to be more "glamorous and voluptuous" (size 2?)  In New York and Asia she needs to be size 0. To get down to that, her daily intake consists of two protein shakes (kale, spinach, almond butter) and one protein meal. 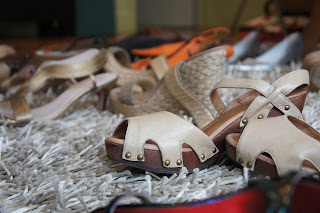 Lara, who blogs at Piewacket had flown up from LA to take the photos and it was fascinating to watch her work. (She doesn't like to be photographed so you will only see a sliver of her arm here and there.) Lara has been doing this a long time: she photographed the young Naomi Campbell and Kirsten Dunst and did the first headshots of Johnny Depp. Amazingly, through her lens the two models look even slimmer and more beautiful. "It all about the exposure" she says. Though the days were dreary and even rainy and she was shooting inside part of the time, she arrived without no lights or equipment other than a big round white bendy thingy. (Best boy jargon, darlings...)

Lara came alive behind the camera and was enthusiastic and sure in her direction. But the end of the day we were all calling out her signature: "Love it, love it, beautiful, beautiful!"

Two funny things about the shoot - first, the number of people who were there. At times 13 people were bustling around including caterer Erin who dropped off lunch. The crowd included me (amateur location scout who found on our street: a Chinoiserie-style house as a contrast, two vintage cars including a 1955 Thunderbird Blue and Camille the dog who was walking by),  Lesley's husband Curtis (best boygopher), Laura, stylist and head of sales.... the list goes on. Lesley recruited from the talented mothers on the playground so I knew most of them.

And second: everyone was taking photos of everyone taking photos of everyone else...like a Escher staircase woodcut. So -  Lara was also taking pictures for Lesley and for her own blog and for a behind-the-scenes piece for a Canadian magazine. Lesley was taking a video for her website and blog, Candes, graphic design genius was also taking videos and photos for the LE website and I was taking snaps of all of them for my blog. 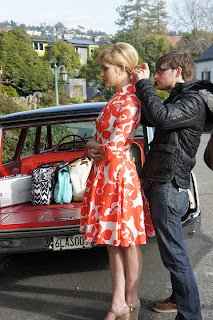 Day Two the crew arrived at 6.45am waking us all up. They were all treated to me in my dressing gown with bedhead (a veritable vision, sweeties). Later there was a wee bit of discussion about how where the massive bag of chocolate-covered pretzels had gone. (Cyyyy??) Alicia the second model was an art student, again, very sweet. And again, the transformation. Meanwhile Tallulah made her lunch and did the vacuuming.

Despite the gloom and rain, Lara the photographer was able to use every spot of light in the house, even in our bathroom.

Alicia must have been freezing but never complained... 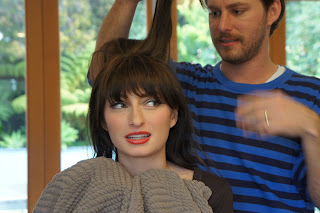 The big news - they used my husband, Kevin, as a model. Lesley has started designing men's shirts and as it happened there was a bloke floating around the house at the time. Well just call me Halle Berry. Just call me Andie McDowell (actually maybe not; their husbands left them didn't they?) The kids didn't know whether to be bursting proud or to snort with laughter. They laughed. My thoughts: "Love it, love it, beautiful, beautiful...."


Today I'm over the pond minding my manners...sort of. I'm totally chuffed to be featured on BritMums (a 3000-member site for British bloggers) writing about blogging etiquette. Is it good idea to comment: "Whaaoh! Mutton dressed as lamb!" at the sight of a 55-year old blogger wearing a very short denim skirt? Your thoughts?
Posted by About Last Weekend at 8:31 PM