This weekend we scooted off to Sonoma again for some sun and screen-rest. And a real treat - a special book club meeting at our friend Jean's house.

I've been thinking a lot about blogging lately; both reading and writing. Sometimes I feel at best wistful, at worst rubbish, after reading other dreamy blogs of the perfectly happy, the always "embracing" or the Mamas joyfully baking with their children. (How do I find that gene?) Maybe I'm just the cynical Colleen in the corner, (Alex Baldwin's mum in 30 Rock) who's always searching for the chink in everyone's armour.

Conversely am I just "skiting" (Kiwi for "showing off") when I post pictures of the 1% pretty of my life? Or am I simply sparing you the yucky? The above tranquil photos are just a tiny portion of our weekend - the rest was about feeling ridiculous for paying for an over-priced cramped hotel with loads of sloshed wedding guests - like being trapped at a party you haven't been invited to. (When will we learn that hotels with kids is just expensive camping?)

While in Sonoma we dropped off our Maltese puppy, Teddy, at a highly recommended "dog camp" as the kids called it, where he'll be for two weeks while I'm away in L.A and Santa Barbara. Teddy knows which side his niblets are buttered and hopped up onto the owner's lap immediately. We bought him a teething bone made of bull's penis tendons, hovered around sadly for as long as was decent, and drifted off, peering through the fence for glimpses of him. It was harder than leaving my first child at nursery school. "I miss Teddy so much..." "I wonder what Teddy is thinking now..."And that was just me and Kevin...

I've been sad too because the fantabulous Kiwi writer, Margaret Mahy died last week. She was described in obits as a childrens' author but I think I love her stories even more than my kids do. She lived next door to us in small-town Whakatane and my Dad worked for her family's bridge-building firm. Margaret Mahy was a genuine star, a single mother bringing up two children. She dressed in feathers and wild frocks to read her stories in local libraries. Her characters defied every cliche without ever being studied or PC in a self-conscious or preachy way. Just two are The Man Whose Mother Was A Pirate about a fearful accountant whose mum takes him back to meet some of her old pirate mates and Keeping House, the tale of Lizzie Firkin, a messy trombone player and the dashing young "Wonder Housekeeper" Robin Puckertucker who loves to clean. 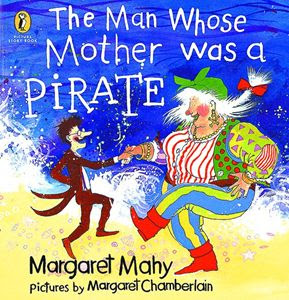 Life is not a blog. Sometimes it's murky and growly and sad and boring and we need writers like Margaret Mahy to remind us of "surprises that lurk in the heart of everything" and that even washing machines can become "discombobulated" and take on their own fantastical life.

This morning I had a spring in my step as I dropped two of my kids at a soccer camp (three of my four kids have stayed home with me alldayallsummerlong - we're talking 10 weeks - what was I thinking?) So today I had two hours by myself. To be a Pirate. Or just have a quiet latte. But not to do a Puckertucker. (Sorry Robin)


Posted by About Last Weekend at 7:04 PM