We're constantly being barraged with ways we can pare down, simplify, de-clutter. But what if you love stuff and for you, more is more?


Last Friday I was invited to a small birthday lunch hosted by Elizabeth Kirkpatrick, 5ft11 and sparkly-eyed, who is known locally as "The Contessa." Elizabeth owns The Hen House, a store in Lafayette which is chockablock with her market finds from France and Italy. Her house is similarly chockablock. "I love stuff" she shrugs, adjusting her pink leather apron.

Elizabeth is warm and unpretentious, the first to make fun of herself, laughing uproariously when her flourless cake blooped all over the show. Her stuff she says is "Frou frou and tu-tu, all in differing stages of decay..." After the bloopy cake, she introduced us to her latest culinary find, Pashmak, a Persian Fairy Floss that she bought back from Australia which tasted like chocolate and halva. One of the guests declined, saying it looked too much like hair. 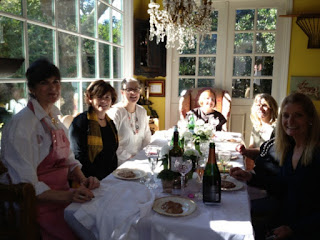 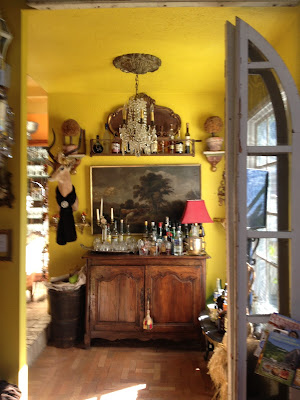 Amid all the silk frocks, feather headgear, old glassware, velvet sofas and wood credenzas (there is even a large statue of St. Francis of Assisi in the guest loo) was a real boar's head with top hat and heart and a"Be Mine" sign -  a Valentine gift to her Italian husband who loves prosciutto.

There were seven women at the lunch and "birthday girl" Linda was turning 53. I have known Linda for four years (through our nine-year-old sons) and I was her newest friend there. The others had known her from grade school, high school, university or her first job in the 80's working for someone who distributed Gucci totes.

This made me think about friendships: ten years ago we arrived in the Bay Area, California from London. We knew only two people. It took at least three years to sort out some good friends and like dating you had to kiss a lot of frogs. Plus the husbands have to get on and preferably the kids too.

At the risk of sounding like a complete dingdong quoting celebrities, I've always remembered Jennifer Aniston saying she was wary of people who changed their friends every two years, that friendship requires work just like any relationship. (She and Courtney Cox have seen each other through infidelities, heartbreak and worse, Jen's dreadful movie choices. Cushioned ever so slightly, one would imagine, by their luxury vacays in Mexico.)

Friends can drive each other crazy and sometimes you have to take a break. Or someone slowly drops you - mostly with women this happens without a blow-up. I've become much more sentimental about old friends and realise now what a rubbish friend I was at 'varsity when I was in my 20's.

Four of the women at lunch had grown children who had left home and they missed them terribly. It put paid to all my whining about how crazy-making my kids are.

But you have the store, I said. "Yes, and that gets me up in the morning." she said "Make sure you have something like that when your kids are gone."

Posted by About Last Weekend at 3:56 PM