First bite of The Apple

There are stories everywhere on the streets of New York. Our first night here everyone is talking about LeBron James, 25, arguably the best basketballer in the world. He has just chosen to play for Miami Heat over the New York Knicks for $16.6m per year. The headlines were all suitably direct and ungracious: Son of a Beach, Le Bum and Who Cares. Pic shows Tallulah, nine, and Cy, six, holding the headlines. 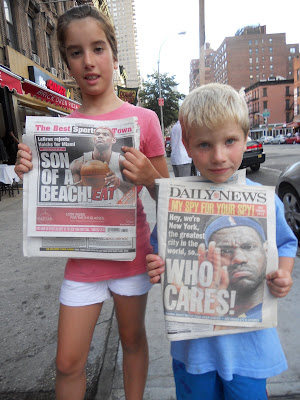 The next morning we are walking up to Central Park Zoo and I notice a "conventionally handsome" guy, as my kids would say. Then I do a double take. He is holding a coffee in his teeth and carries a dozen roses.... and a toilet plunger.  Has romance changed that much since I was single? I had to know the story. Dominic - he told me his name -  said his girlfriend had just moved into a new apartment and he wanted to leave flowers for when she got home. To get her to hand over her key, Dominic said he had blocked up the toilet and needed to buy a plunger. 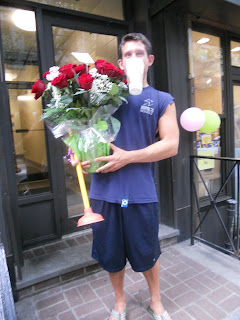 Once at the zoo,  we're all excited to spot the penguin who has two gay Dads. One of the kids' favorite books is 'And Tango Makes Three', a true tale. One penguin egg didn't have anyone to hatch it, so they gave it to a established gay male couple. The couple were so broody they had even tried to hatch rocks. They hatched and raised Tango and were a complete and seemingly happy family.
None of the four Zoo staff we asked could identify Tango and his Dads, our favourite trio. Not one had the slightest clue about them and they were dismissive and off-hand about further questions. Eventually we got hold of the penguin feeder who seemed very relectant to talk about the gay Dads. "They split up", she said. "It's not... they were not...." 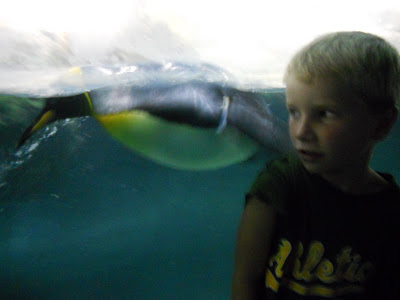 What really happened? I was utterly devastated by the news. This was a penquin couple who so desperately wanted a baby they sat on rocks. Where was Tango and where were they? Is this a story on the streets of New York that needs to be told?
Posted by About Last Weekend at 8:18 PM