The redhead woman who works at garden centre at the end of our road, where I spend an inordinate amount of time, said to me today: "Oh that's your real hair colour, isn't it?" Since 18 years old I've faired my hair - which naturally wants to be reddish - but these days I'm going for the (red)gold. There was a spark of recognition in her eyes: "Yes, you're one of us." 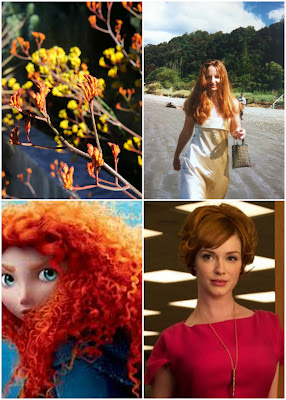 
I'm not brave enough to embrace the bright red though (my skin is too ruddy) and I'm kind of disappointed in myself that I don't....I've only been really red in my Sun-In years.

Both husband Kevin and I both have loads of red hair in our families so I am chuffed to hear that Brave, the new kids' movie about the "feisty redhead" (why are those words always coupled?) is breaking box office records.  The NY Times even did a full page spread on all the hours and days spent considering exactly how her hair should look.

For the past two years my true blue redhead sister Pietra has been quietly filming a documentary about redheads "to celebrate my tribe. What is the point of it? Maybe I want to make redheads into super heroes, thereby exorcising my own demons of growing up a redhead."


Technically red hair is a chromosomal deficiency often coupled with white skin and freckles - making it the rarest (1%) hair colour in humans. It's this rarity that attracts the pain and the fame.

Throughout history, redheads were prized as chosen ones and feared as aggressors. In Polynesia red hair was seen as a sign of a a ruler and in Mediaeval times artists were obsessed with capturing redheaded beauties. Boudica, who led the British uprising against the Roman Empire was always depicted with flowing titian locks (my husband was so taken with the image he wanted to name our daughter after her - overruled.) Joan of Arc was red and Elizabeth 1 took the throne with a copper mane, later replaced with a vertiginous wig.


But redheads are also much ridiculed. Some of the insults my sister Pietra collected in her research: Gin-ga (with a hard "g" all the more damning) Orange Goblin, Piss Brindle, "Freckleface your Dad thinks you're a big disgrace!" "Carrot top, carrot top, catch her quick or else she'll pop" "Redhead, mad as a bar, 'cause the silly little thing has ugly hair!" And F.O.T (F****ing Orange Thing) - which is what redheads are called in the Australian Army.


There is the quiet denial. Recently I heard a mother insist her toddler daughter was a "strawberry blonde" while behind her a family portrait showed the child - with incandescently flaming red hair.


This year I've seen red fast become a by-word for glamour, with rise of actors Jessica Chastain, Bryce Dallas Howard, Emma Stone and lately Damian Lewis (is he the first redhead leading man ever?) in Homeland. Redhead models are all over the magazines, a far cry from when 80's supermodel Angela Dunn was dismissed with the line: "Redheads can't sell yoghurt - or even the fridge to keep it in."


Redhead Joan in Mad Men has paved the way too, as a sure and sexy but most importantly three-dimensional character. Traditionally, the Hitchcock blonde (in this case Betty) emerges as the likeable protagonist. But here Joan steals all our empathy. Funnily enough, in real life actress January Jones is taking a visible break from Betty by dying her hair a very bright red, below.

This is because red has come to mean authenticity. Nicole Kidman lost a certain amount of intrigue when she bleached her red curls to an almost wig-like patinum, Lolo always goes back to her roots when she wants to be taken seriously. Julianne Moore, ever authentic, famously proved she's a real redhead in Short Cuts.

Who's your favourite Red?
Posted by About Last Weekend at 11:16 PM