Yesterday was Father's Day and being hideous cynics and very non sentimental, Kevin and I have a "no hallmark holiday" rule, so I prepared to studiously ignore it. Despite that, I find myself doing two posts on it. 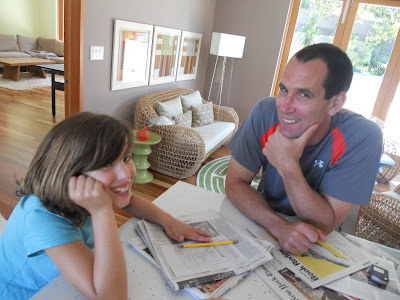 There is no one who loves Kevin like Tallulah, nine. She follows him around, drapes herself all over him, pines for him to arrive home. She has three brothers who are not always charming toward her and Kevin is her advocate and protector.

Kevin and Tallulah also tease each other like mad. Kevin calls Tallulah "chicken wing" and she calls him "skinny jeans".

One ski day at Alpine, Tahoe,  Kevin was just sitting down for lunch on the outside deck. He noticed a girl just like Tallulah walk past a plateful of abandoned chicken wings. It was Tallulah. And she didn't know he was watching her. Some of  the chicken wings had been eaten with only bones left, but some remained intact. Her hand twitched, "ooh" you could see her thinking "those chicken wings look so good". She was going to take one. But then she looked up, saw Kevin and clomped off.

One week later Kevin came down the stairs at home wearing a pair of black, zippered Edun jeans. They were a leap for him, with the side zipper and straight legs, but I had persuaded him to buy them. Tallulah took one look:  "Dad" she said in horror: "Are those skinny jeans?" 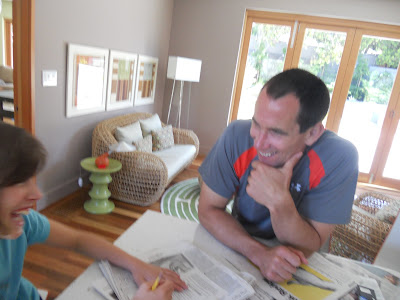 Unlike her parents,  Tallulah is romantic and sentimental and longs for a world where we call each other and her darling, dear and sweetheart.

Kevin is teaching her German and here is her Father's Day poem:

"Wie gate es ihnen"
I say to my Vater

As the birds rise
As the mountains shake, I get the feeling it's Vaterstag

Candy, clothes and flowers I see on the counter table
Waiting to be eaten, wore and smelled
I remember it's Vaterstag
Last, I stand there, then get the erge to run, I hug my Vater nice and smooth
Knowing it's Vaterstag
Posted by About Last Weekend at 12:59 PM