Our Mad Men Party: The Night! 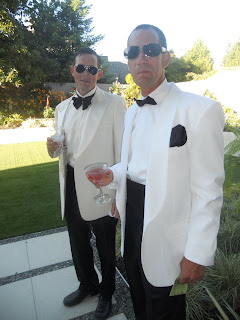 It's going to be all right on the night. But it is the night. The Mad Men party night. It's close to 6.30 - start time - and one of our six hosts, Sally, (food and music) is trapped at the hairdresser for two hours with the beautician adhering individual false eyelashes on her. Later on, I was a bit jealous of her eyelashes as mine looked a little tranny.

Another of our hosts, Curtis, (right with Kevin) had been incredibly ill for three days but valiantly donned his white dinner jacket and showed up, looking ashen and 12 pounds lighter. My brother-in-law David always says after illness, tragedy or being lost in jungle for two weeks: "At least you lost some weight!" I repeated this wisdom to Curtis who, strangely enough, did not look consoled.

Confusion about music and food aside, I know its going to be right when Kenny'nMike appear to help Lesley and I with last minute napkin folding etc. (see Kenny and Lesley in pic below) 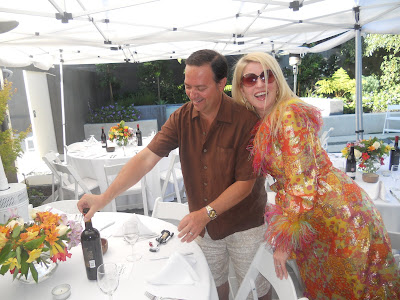 In a background computer we have DVDs playing "1001 Classic Commercials" from Mill Creek Entertainment, loaned to us by Groove11, the creative agency in San Rafael. 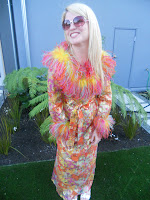 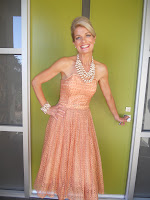 Co-host Lesley (right pic)  appears in her grandmother's dress, which is truly the most beautiful long frock I've ever seen. It can only be described as a "confection" with sparkle, a spectrum of orange, pink and gold and feathers. 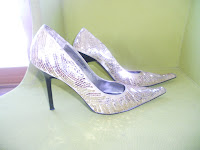 If you've read my Musical Wigs post, you know I ripped the top of my coral-terracotta 1960's dress (above left) bought for the Madmen party. Irena Klin on Piedmont Ave made it into strapless, which actually stayed up.  The dress is a colour I've never seen before "like the old stone in Rome", a friend said. I also have a boomfy hairdo and necklace and bracelet from Laura of Stella and Dot. Shoes by Steve Madden. Lesley and I pose with our life-size Don and Joannie cut-outs from partystandups.  We took images from the AMC website and partystandups fulls in missing arms and legs. I take snaps with a Fuji Instax Instant Camera - it's the new Poloroid, instant fun -  from Looking Glass in Berkeley.  Pic shows Me and Lesley adjusting Joannie a bit before guests arrive. 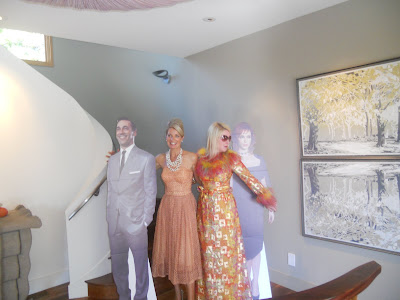 Enter the bartender Pascal, who hands me (yet another) Joannie, a lime, cranberry, raspberry and vodka cocktail he's invented and named for red-headed head secretary in the show.  Too delicious and the cranberry juice makes it very efficient, de-toxing while you tox. See Katrina (below) with one in hand. 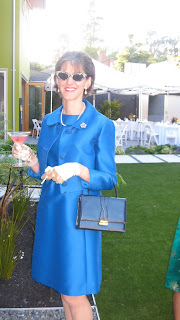 We have a total of six cocktails to choose from, including White Russian, dirty martini, Manhattan vodka Gimlet and Tom Collins. All guest are of course handed a candy cigarette.

The first guests look so fabulous we don't care about last minute hiccups. Katrina is wearing her wedding outfit, a shantung blue vintage suit from Pretty Penny in Oakland. She confides that even the conical bra is era-correct. By the end of the end of the night she has been named "Best Dressed", winning the Lesley Evers Tilda dress. 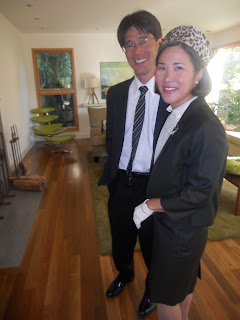 Everyone has vintage dresses, some from Bella Vita or Mercy in Oakland, Sharks or Mars on Telegraph Avenue in Berkeley, many with their hair in what Americans call an "up-do". Leigh(left) is impeccable in her mother's suit and wins "Best Dressed" runner up. 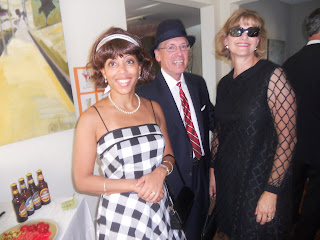 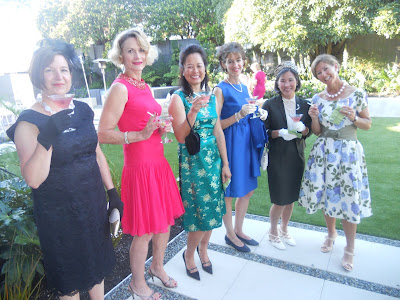 Playing on a background computer "1001 Classic Commercials" from Mill Creek Entertainment, loaned to us by Groove11, the creative agency in San Rafael. The cherryness of each advert is quite something to see. 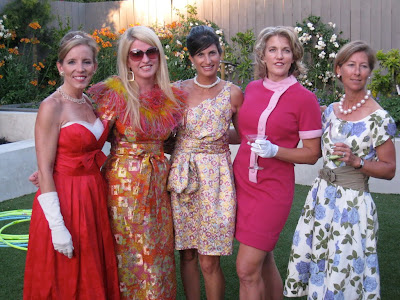 Post cocktails, we had instructed Kevin to supervise a hoolahoop competition (a de rigeur party game in the Sixties apparently). There was a tiny wee rebellion, and Kevin was left clutching his stop watch out on the lawn and no hoopers. We let it go. For now...

The hors d'oeuvres remained untouched and I had visions of eating devilled eggs for the next month.  But then no one with a childhood could resist them presented on our little aluminum TV dinner trays from kitchendance. The TV dinner trays were Kevin's job and he admitted to spending a disturbing amount of time researching this. 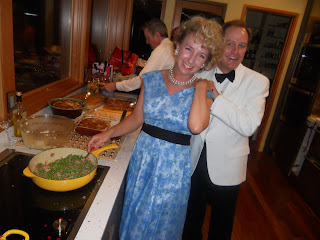 Starter: Chopped salad from Tomatina in Park Blvd in Alameda 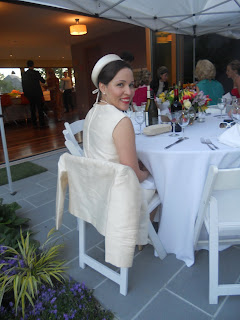 The jello and the Banana Pudding were hard to make elegant but Lesley hit on the idea of serving the pudding in rolly pollies. (That's what Americans call those cute tumbler glasses that are now back in vogue).
Leann (left) is gorgeous in a white silk suit bought from the White Elephant Sale for the Oakland Museum. She is named joint runner up for "Best Dressed". 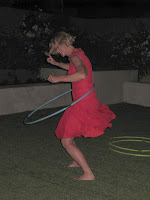 Now everyone was up for the hoolahoop and it was pretty fierce competiton between Andrew, a fitness and health guru and Alison, multiple Olympic athlete. Alison smiled and swivelled and took first prize, a Bloody Mary glass set. Andrew seemed satisfied with his second place tin of Spam, until he noted the calories (boatloads) 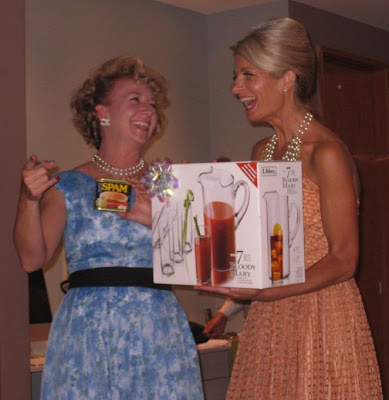 Photos shows Sally and I presenting the prizes.

It was a grudge match for Andrew by the time we got to Twister.  The picture below depicts the competition's ferocity. Ultimately Andrew claimed the title.  Second pic shows him being congratulated by his proud wife, Caryn. 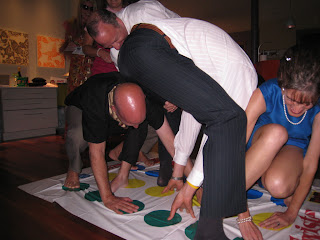 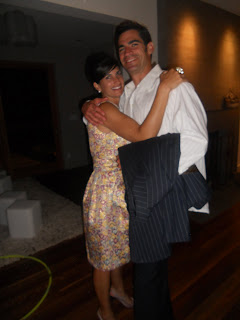 We'd all agreed that by the end of the night, something had changed in the universe and we all started looking like surreal Mad Men cutouts. 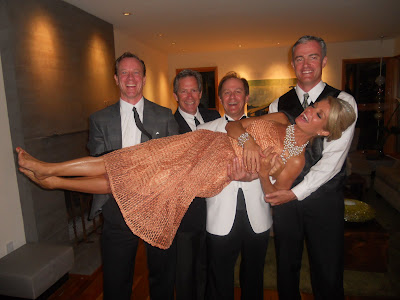 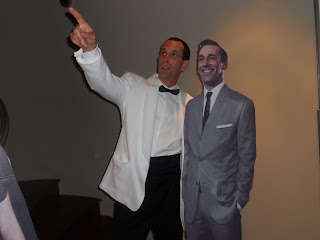 Some of us were even capable of making the cut-outs laugh.
Posted by About Last Weekend at 5:16 PM