Like our New Zealand party, this was another school auction item. We had offered a Mad Men party at our house, hosted by ourselves and two other couples. On the night of the school auction, 16 couples bid $650 each for it, which was so fabulous and so great for the school! Until... one month before end of school we realised we actually had to do it!

In fact, almost everything about throwing this party was fun, from the planning meetings, shopping for the dress, researching the cocktails and menu and the actual night.

For the benefit of anyone who has not become hopelessly obsessed with John Hamm and the TV show Mad Men,  it's a sexy, stylised tale of admen in Madison Avenue, New York in the early 1960's. A time when men wore fedoras and women wore white gloves, lunches were liquid, people smoked even in bed and patting secretaries on the butt was part of the scenery. 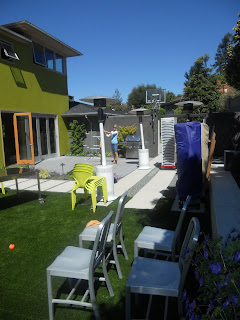 To make it special we had planned on having dinner outside in our backyard. Most Oaklanders panic if they know they have to eat outdoors, because it 's usually chilly at nightfall. So we ordered two canopies with sides and three patio heaters from the nearby Piedmont Party. 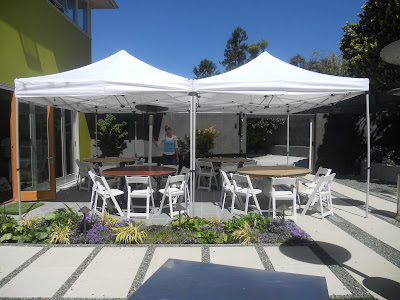 All the tables and tents were delivered the day before and co-host, Lesley, and I had a bit of a three stooges scenario trying to put the canopies up, but eventually after lots of squeezing, huffing and puffing and giggling we did it. 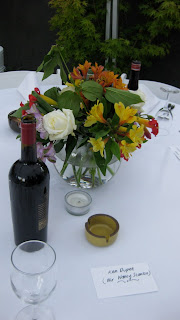 Lesley, knew from experience that more than eight people around a round table does not work, so we opted for four tables of eight. Our other host, Sally, scoured antique stores for ashtrays and came up with some real treasures. For namecards, I introduced equal opportunity name subjugation. I don't know about anyone else but I detest being referred to as Mrs Kevin Coldiron which is actually quite common. So I wrote: Mr Jody Brettkelly. And Mrs Kevin Coldiron.

Sat, DAY OF THE PARTY  bloody hell, dawned. It would be nice to imagine yourself floating through the day buying flowers, baking a cake, noticing the children skip down the street in a sort of reflective Mrs Dalloway  kind of way. A stream of consciousness monologue, showing the beauty and profundity of one single day.

But my stream of consciousness would have Virgina Woolf despair. Goes something like this: "Bloody hell the husband ordered the candy cigarettes but never checked they would come so come Sat morning,  so I'm off to three candy stores around the East Bay to look for candy cigarettes...."

At one stage I was rapping furiously on a  candy store door in Oakland.  Didn't he know it was 10.02am???. I needed my candy ciggies.  The person who served me was as grumpy as me and didn't want to be drawn on who else might have the ciggies.

Eventually I return home with my  stash (from the sweetie pie people at Powells in Lafayette)  - not 40 ciggies but 40 packets. Harley,12, looked at them quizzically: "Oh pity: those are so small and thin. You can get ones that looks exactly like a lit cigarettes and they have powder come out of them when you blow" Aaaargh, I don't have the blowy-out ones!!!

Next the cheese ball.  I can redeem myself. 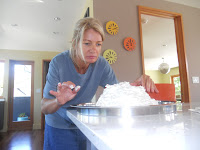 I buy six packets of cream cheese (the whipped kind I usually buy) just to make a really impressive cheese ball. A centerpiece cheese ball. Wow, they'll say, amazed and astounded. What a triumph! After mixing in pimentos and chopped green peppers I notice loads of slippage. Then I realise, because it's whipped, it just won't hold. There was no whipped cream cheese in the Sixties. After further coaxing and moulding, it still won't ball. I'm becoming a bit unhinged. I mix in four packets of non-whipped cream cheese which just goes hard with the blob around it. I put the amorphous goop in a bowl and pour nuts and pimentos all over it.

When the other hosts turned up, I realise Kevin must have had a "Don't mention the cheese ball" de-briefing with them. They all smile at me and studiously avoid looking at the cheese ball. And that night?  After wasting ten packets of cream cheese I realised at 2am after the party had finished, that there was not one chip dipped into that bowl. It was wholly intact. Not touched. 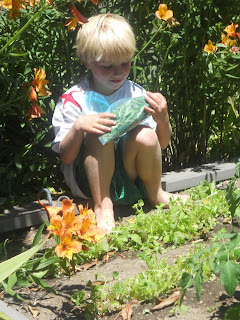 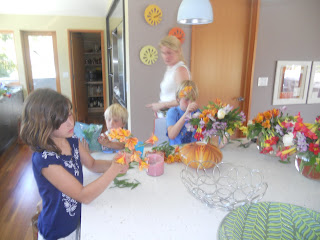 Thank goodness Lesley arrives to do the flowers. As far as I can tell, every woman who has been brought up in the South can arrange flowers and each has her own little secret. Lesley's trick is to make two crosses across the top of the vase with sellotape, allowing the flowers to drape prettily across the bowl and stay there. She is so much more patient that I, allowing all the kids to help her. Pics show Cy, six, snipping extra flowers from the garden.  Lesley's eldest, Chase, 11 and my Tallulah, nine, arranging flowers thoughtfully and quietly... 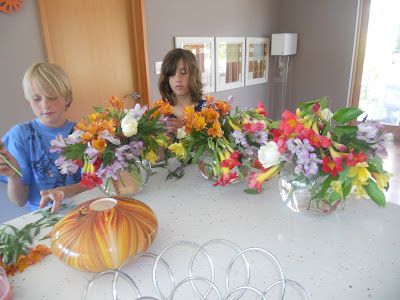 So we do have a Mrs Dalloway moment at last. Not profound perhaps, but serene.
Posted by About Last Weekend at 10:04 PM