Come Fly With Me!

It was our Saturday night date night....at the San Francisco airport. I know, an odd place to be when you're paying for a babysitter, but we were seeing off Harley, 12 and Jackson, 11,  to visit their aunt, Pietra and grandparents in New Zealand.

We assumed we would have to hang around for the departure time of 9pm but good old Air New Zealand said we could drop them off at 7.45pm and they would do the rest. We were farewelling the boys off at the security line when a third unaccompanied minor, a girl, joined them. Both the girl and her parents were weeping and hugging, obviously distraught at the prospect of separation, they were so going to miss each other. I felt quite teary-eyed at the thought of their daughter leaving them, they were obviously such a close family. Harley, 12, dry eyed, turned to me, his dry eyed mother: "Why are we not crying like that? Guess we're just not very emotional".  Little shamefaced I replied: " We're crying inside". Besides it's only a week. 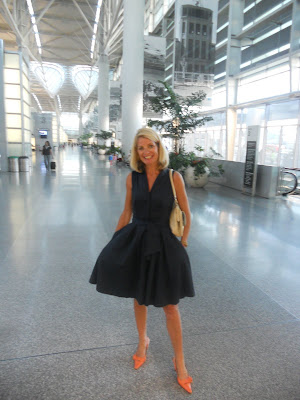 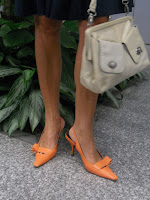 Being at the airport on Saturday night gave me the excuse to dress with some nostalgia. Inspired by the prosect of a new series of Madmen this week, I wore my Lesley Evers Tilda dress in navy blue, a colour which is always evocative of those early sixties "Come Fly With me' posters. With orange Miu Miu slings backs and proper lady clicky-shut handbag.

Truthfully I was incredibly jealous and not a little resentful of my boys. They jet off for a week with my whanau (family), chockful of adventure and thrills. And I get to stay home to make endless peanut butter on crackers for six year old Cy?

You can't got to New Zealand without shi**ing....yourself.  Or screaming endlessly.  There is zorbing, which is rolling down hills in a hamster-like rubber ball. There is flybywire, a 170mph self drive flying machine, dam-dropping, which is as the name suggests, and "black water rafting" through underground rivers beneath stalagnites and stalagtites. And loads of other stuff called things like "diving with sharks" and "Mad-dog boarding" that sound knarly and even I am allowed to say stuff like"rip tear and lacerate dude". As my boys said: "They must sell a lot of TP here" 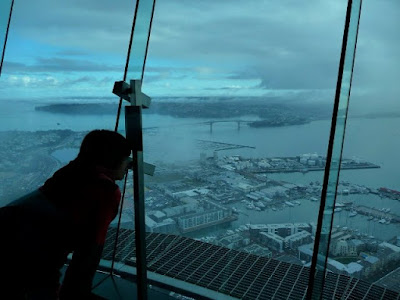 Just a couple of hours after they landed, Pietra took them to a new kind of bungy jumping, the Sky Jump. They  rode right to the top of the Sky Tower in the centre of Auckland city, the tallest tower in New Zealand. Then they stepped out.  And then -  they jumped off!  That's 192 meters down. (More than 600 ft). At a rate of 85 kph, 65 miles per hour. Right into the middle of the city. Pic above shows Harley surveying the jump from the top. Harley's jump was filmed by Pietra: click here for Youtube video.
Posted by About Last Weekend at 10:51 PM