We are in New York City with the kids for eight days. After 13 years of vacationing with kids I know this to be a family trip - not a vacation. On vacations there is childcare or kid's clubs. Allowing patches of appreciative and refreshed togetherness. But on this trip we will be together 24 hours a day.  As soon as we arrive in New York, I mourn the vacation I dreamed of. And, as with losing anything beloved, I enter the five stages of grief.

1. Denial: this can't be happening to me.

I envisioned the six of us skipping through Central Park, engaging colourful characters in witty repartee. Dinners feature more quips -  "Oh touche!" - and appreciating sophisticated cuisines. The kids are electrified by the myriad of museums.

Instead, the kids' whining is almost constant and the only time they look up from the ground is to roll their eyes. The meals are torture, with Cy, six, juggling cutlery, fries and salt shakers.  Tallulah, nine, groaning over the prospect of eating anything that doesn't originate from whitecarbcity.  Harley and Jackson stir the pot.


The apartment we are renting (VRBO)  is immediately dispiriting. For the most part it's clean, but the rugs and industrial carpets look marked and every room is dark and depressing. Two of the kids wake up in the morning badly bitten from something. We realise the trompe-l'oeil (murals) and chandeliers are completely different from the one in the photos (left) on VRBO site. Ha!  We are in the wrong apartment! And thus.... in the wrong life. If we were in that other trompe-l'oeil apartment, which was quirky but inspiring, we would have better behaved kids and a super time. 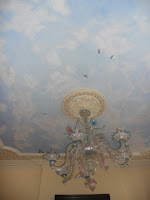 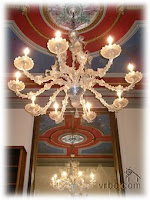 2. Anger: wanting to get even, apportioning blame. 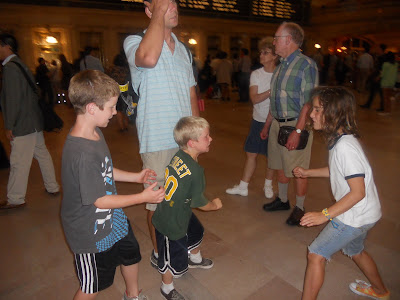 Kevin gets the brunt, until I remember that I was the one who wanted to go to New York for eight days. Who now to blame? I become incensed by the omnipresent garbage bags in the streets. The streets are filthy and I'm constantly tripping over tiny fluffy dogs and nearly stepping in their shitsu.  And then there's my swollen ankles. Who can I write to???

4. Depression: an overwhelming feeling of hopelessness.
After entering the third security line for the Statue of Liberty, by now Cy was punching everyone at arm's length and Harley and Jackson were scrapping over the last piece of gum, earning us disgusted stares from everyone.

I just can't go on, I said almost tearful. There's no way out, replied Kevin, except ...through Liberty! Then, said I - Liberty or die!

Kevin and I nodded, agreed in our pact. We slid on our audio tour headphones and ....dully stared ahead for the next hour, playing the tape over and over and over.

5. Acceptance: finding the good that can come out of the pain.
The Natural History Museum has an exhibit about the Race to the South Pole between the British Robert Scott and the Norwegian, Amundsen. The Norwegian was less likable, but won. One interesting nugget was that Amundsen did not tell the crew their final destination - the South Pole - until they were well on their way. Now how did that go? "Guys, listen up, we're not going to Rio after all..."

We learn from Amundsen -  don't tell the crew too much. Our day ahead? Who knows?  Before we would list everything: "the Whitney, lunch in the park, a show". Any itinerary that did not include a suggestion that we might visit the M&M centre in Times Square was met with howls of disbelief.

We found walking through the parks was painful for the kids but put a soccer ball in front of them and they would run after it for hours. 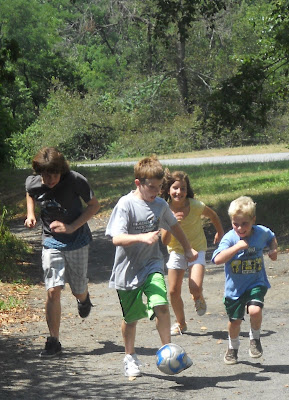 We finally accepted our fate: a diner with a TV such as Big Daddy's always makes for serene family dinners. 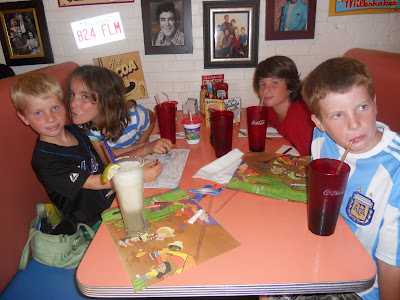 Bonding comes at unexpected times. We signed up for a walking tour of Greenwich Village. In London where we used to live, walking tours were conducted by raconteurs or "resting" actors who dress up as one of the lively bods that lived there. The New York Times had declared Joyce Gold "the doyenne of the city walking tour" according to a line in her brochure. But we quickly discovered she was not a good yarnspinner or a "dag" (great laugh) as we kiwis would say. She explained at length that she conducted private tours and at what price and declared a 10 min break to buy water, which was annoying. And she was sweating so profusely I feared for her safety.

Peeeeeyeeew, whispered Kevin after a while... this stinks!  I had to agree with him and Cy. It was booooring! Facts but no illumination, no funny anecdotes - we could have read a guide book more easily. Grabbing the kids' hands, we raced off laughing.

In the safety of the shadows, Tallulah said: "Oh I thought it was rain, but she actually dripped sweat on me!" Each of the kids sparked up: "Yeah me too... eeeheww!! We laughed for hours about that one. 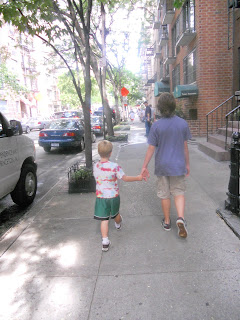 Sometimes it's the least expected things that make the fond family memories. And if it takes an encounter with a moist and rather dull tour guide, then so be it.
Posted by About Last Weekend at 12:39 PM