At age 48, and with the not insubstantial skin slippage mentioned in other posts,  I have a new shopping mantra. It's a Kiwi saying: I don't want to be "Mutton dressed up as Lamb". This is a reference to woman trying to dress as a much younger women (or like their daughters). Too much skin, too tight, too loud and the new fashion of very short shorts and stilettos. However on the other end of the scale, should I really embrace the "Eileen Fisher years", as my friend calls them?

With four kids in tow, there is only one way to shop in New York. For five minutes, while Kevin and kids buy tickets from a nearby museum. 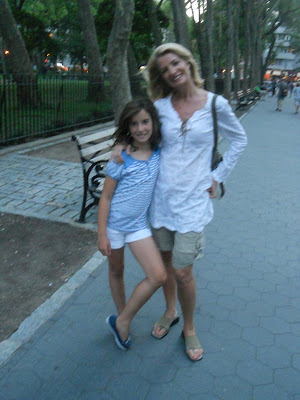 This is how I found my new favourite shop in New York, Calypso St Barth's on Madison Avenue, right next to the Whitney Museum. (Pic shows me with Tallulah, nine, wearing my new Calypso tunic)
Despite its location on Fifth Avenue, some dresses are on sale for $150. The shop is, as the name suggests, everything you need to wear if you are vacationing in Calypso, St Barth's.
I've never been to St Barth's and probably never will. It doesn't really even need to exist. Just the seductive suggestions of wind in the hair on sailboats or squeaky white sand between exquisitely manicured toes.
What is it about white linen with a dash of leather and sparkle that send women in paroxysms of  credit card swiping? It was easily the busiest store I have seen in New York and being hopelessly insecure about my "Eileen Fisher" years, I was happy to see that shoppers were not just 50 and over.
Pic below show me wearing my new Calypso dress, un-belted just outside the Natural History Museum. with Tallulah, nine, and Grandma Patty. 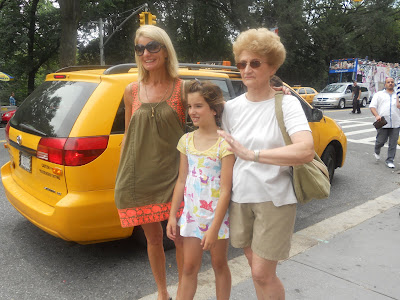 The two pics below show me with dress belted on 85th street and just outside the French restaurant Orsay. Belting probably make it too short and thus perilously close to being "mutton...". But it's nearly dark out so bit safer. Or am I already on the slippery slope to mutton hood? 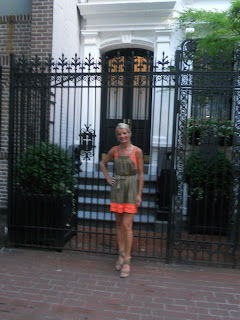 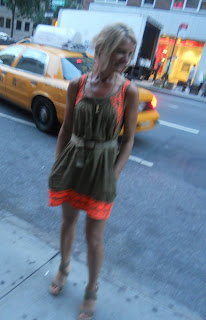 Posted by About Last Weekend at 7:47 AM