It was the first day of Coterie, the prestigious fashion trade show in New York, and I let Lesley and Laura open up the booth  while I blobbed in my hotel room feeling very tired. Did I tell you about my onerous duties yesterday..the lemon heads...the white roses. 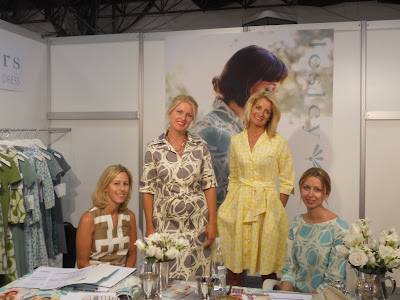 When I did arrive at the Javits Center, the building was a different place. The booths were filled with every imaginable configuration of dresses, jeans, shoes and whatever else you can cover your body with. And the floors were chocka with buyers mostly wearing a uniform of either black leggings and cardigan or pleated khakis. I felt very, very different in my demure and proper Grace frock, but in a good way. "Love your dress, it's the Mad Men thing!" someone called from a booth.  "Oh, yes" I called back " but she was doing this way before Mad Men"  They weren't listening. Amidst leggings and floppy taupe tops as far as the eye could see, I stood out as much as a Eighties Piccadilly Square punk rocker in sea of bowler hats. 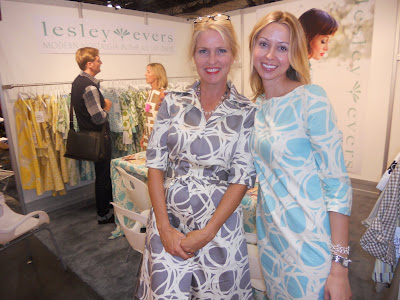 At Lesley's booth they were writing orders all over the show, with buyers cooing over the racks of dresses. "I'd love to take all of them, but I can't." I heard again and again. They were incredibly busy so I tried to look equally busy and helpful, making "Aha! Moment" expressions and shooshing the racks of clothing. The gorgeous young PR person - pic above with Lesley - (did I ever have skin that dewy...no) was trying on different dresses for buyers. 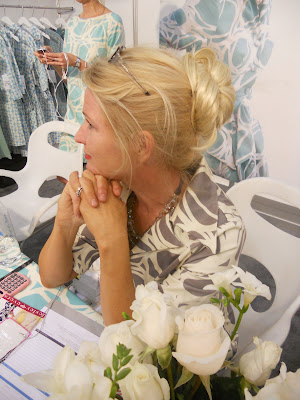 Eventually there were so many buyers in the booth, I thought it best to clear my standing space, mosey off and take a look at the booths on the "contemporary" side. The most popular booth was clearly Vince (pic below) which just shows you, you can reinvent the wheel...and the t-shirt and cardigan. 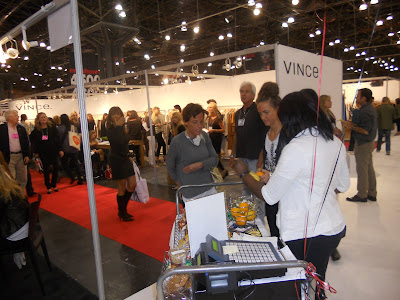 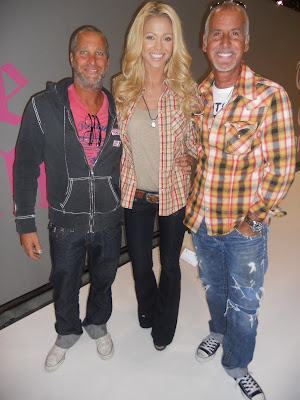 Jeans in general were the busiest booths, again with re-inventing the wheel. Pic above of True Religion folks taking a break.  What fascinated me is how all the booths had models standing there all day, ready to try on for the buyers. They all looked 6.2ft, 18 years old and size 00 with the only variance being hair colour. A few had eyebrows white blonde in line with new model trend. "But look" I wanted to say to the buyers instructing the models to try on (yet another) floppy top " that floppy top won't look the same on your customers. Try it on yourself".  Gosh if only people would listen to me...(and pay for the pleasure)... so frustrating. 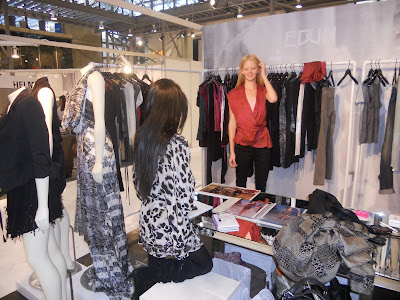 I was fascinated how some booths had outfitted their little space. The most tranquil was Soh, with a tree trunk table stand and mid-century chairs. 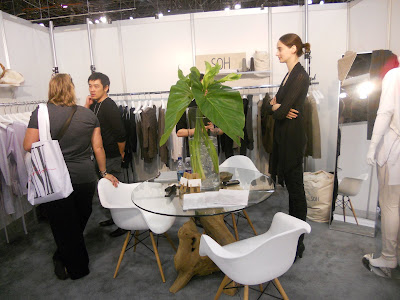 Very candy-store compelling was Milly one of my favourites and almost always wearable. The racks were humming with gorgeous colour, red, whites and blue and florals. There the buyers were as awed and happy as I was, listening to the presentation, as obedient as if a teacher had called "Criss cross apple sauce" 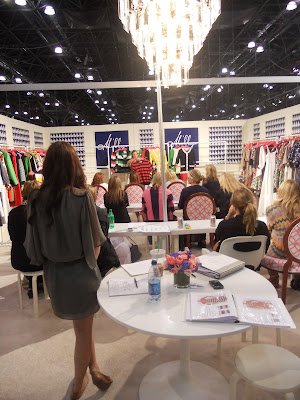 Juicy was very pink and black as you would expect, with a gold shining armour. 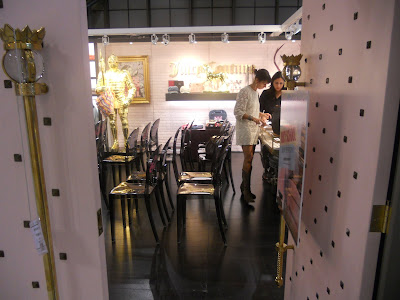 And a brand new jean company called Mother. How can there be so many jean companies and so few of them can eliminate the flat butt PA (pancake a***). Hardly anyone can transform you into pert butt. With the one exception being Habitual  for jeans and Sanctuary for Khakis. There, I 've spent years in changing rooms getting to those names and you have them in a second.  Everyone should just copy their stuff and do variations on it. I had a feeling the Mother woman wouldn't appreciate my philosophies so I just chatted with her about the title. The Mother woman explained; it's a comforting recognisable name with the M also subliminally representing the upside down spikes of devil's horns. Hmmm.... 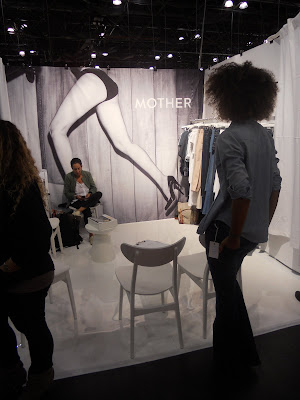 And there was candy everywhere. I must eaten one bucketload at least of Swedish fish. There was some cava and bruchetta at one place, but  the funnest was this balloon guy at the strangely named E.Vil booth which featured neon t'shirts with smiley faces. 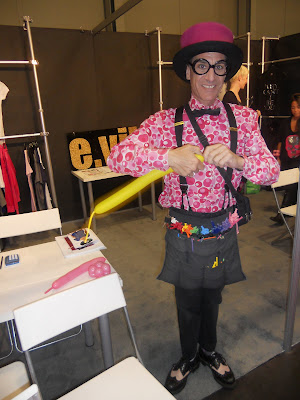 He made me a balloon daisy corsage and I couldn't be more chuffed. The fash girls lined up behind me: "OOh cuuuute! Could you make me one to match my outfit". 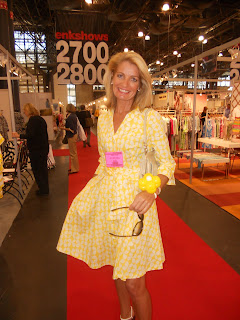 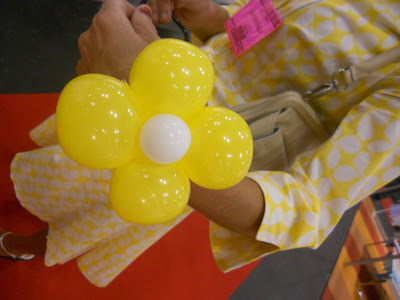 Walking the show, I heard the same conversation again and again: "But, how did she lost that weight?" And the other: "Don't go near him, he's a dog".

I'm not sure if it was the sugar or fashpash overload but I need to put on my gold Havianas jandals (flip flops) and walk somewhere. Every real New Yorker apparently has at least one pair of flat shoes in their bag. I was heading for the Meat Packing District where all the fashion industry gathers. Just the name  reminded of the meat district in East London when I worked in Farringdon. Every morning I arrived to blood on the streets (literally) and the meat workers having beers at 7am, their knock-off time.


I hadn't realised it was 3pm and I hadn't eaten anything all day -oops except for the bucketload of candy - how very 'ista of me. I slipped inside  Tipsy Parson and ordered a reviving glass of wine and huge bacon sarnie.(sandwich) It was big, huge teeth-rattling ugly tasty bacon, not the slim fufu stuff you get in the stores here and I hadn't tasted anything as good since my Farringdon, London days. (I would have posted a pick of the wine and sarnie, but I ate them) 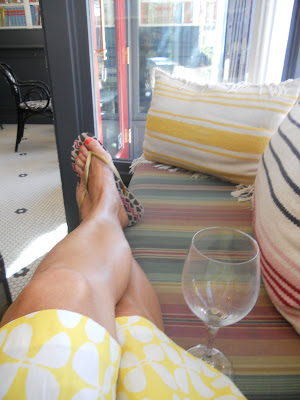 Leave pretty to the frocks. When it comes to bacon, the uglier the better.
Posted by About Last Weekend at 8:52 AM