There is a great scene in Absolutely Fabulous where a fashion magazine editorial team are discussing the next month's edition. When asked about her stories, the beauty editor says breathlessly (something like): "This month we have eyes! We have lips! We have cheeks!" After walking the floor for three days at Coterie, the fashion trade show in New York, I found myself starting to write the same sort of stuff. And singing this AbFab song, sing along!
One of my friends back home emailed me: stop faffing (mucking) around - just tell us what the trends are for spring. Okay then, here it is. Colour, brights, neons, Studio 54 shine. And ...er...neutral linens with folk art lace and crochet. Now I know what fashion journalists are up against. And how unglamourous is the life of a model, see below. 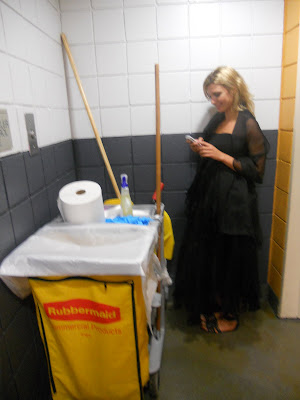 The beige and natural rope and hemp looks with folk arts and craftsy bits were beautifully done at  Nanette Lepore. Yes those bib trousers will make you look like the side of the barn, but I'd love them anyway. And the bags. Linen-y with a hint of sparkle -  you could convince yourself that they are so day-to-night that you will never have to buy another bag again. 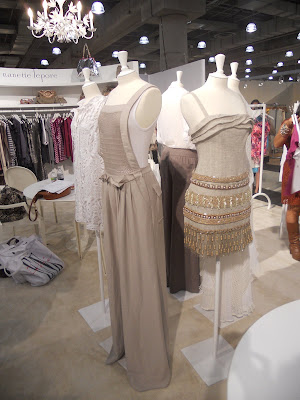 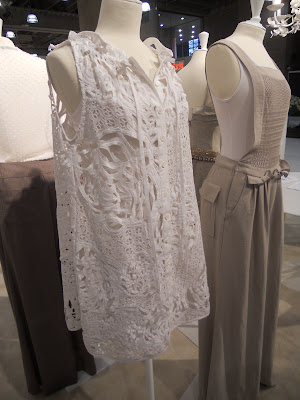 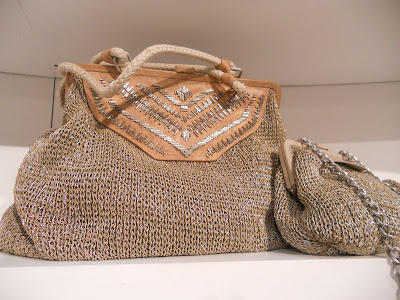 And the ultimate folk art shoes from the french designer Robert Clergerie. I had heard his name 25 years ago in New Zealand, my friend Carmel and her four sisters would save all their money to buy his shoes and wear them forever. I can see why now. 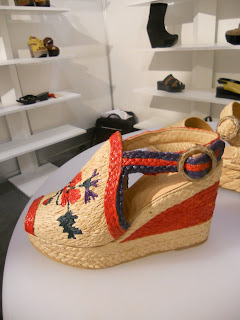 Next, the best coat people ever - Mackage . I have a five year old camel coat from them and I love it more every time I put it on. Is this the most elegant trench? I'm saving my pin money starting today. 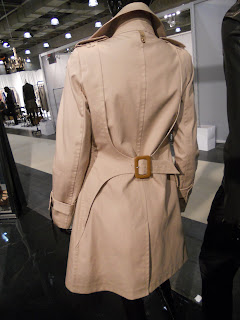 The epitome of the other end of the fashion trend is Halston  Heritage, all about the fabulous shine of Studio 54. There was gold and silver lame looking dresses straight out of the clubbing Seventies and neon bags. It's tiny space was thronging with people. I must have looked very out of place because the door person asked if I had an appointment and did I have a card and was not sure I should take photos: "They are worried someone will take their ideas'" she explained. I assured her I was utterly clueless and didn't have the capacity to steal my six year old's ideas. But I felt a bit claustrophobic in their disco space and moved on. 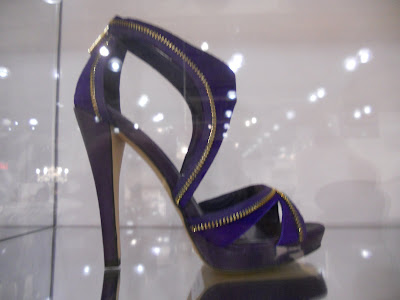 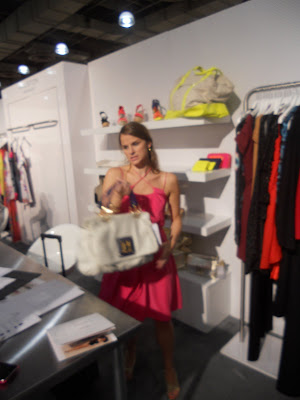 Next stop Trina Turk and of course she has colour but everything looks more glorious than ever. 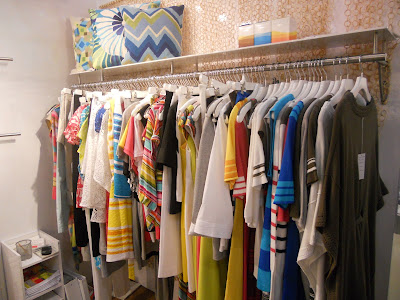 Pleated pants, jeans and khakis are everywhere and whatever you say, you will start wearing them because they are so ubiquitous.  Do you remember at Uni (college) -  those jeans with pleats in the front and a jodpher bubble butt? I had many pairs and after putting on what they call the Freshman 15(lbs), somehow in those pleated pants your legs and butt felt roomy and thus smaller. Of course we now realise our butts didn't look smaller from the back but who cares. The ones below from Lamb are the droopy crotch plus the pleats and somehow look amazingly cool, as do the ones in second pic worn by one of the Koolaburra boots team. 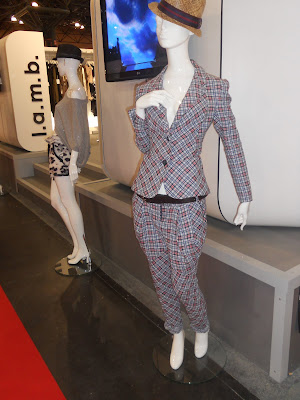 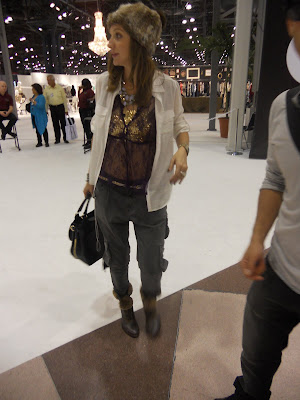 Also ubiquitous are the short shorts worn with high boots and stilettos. Not sure who is buying these wee things but someone is. I loved how this woman wore a very drapey top with her short shorts. The blinding shine on the left is a leotard in a reflector fabric. Her red-trousered friend told me he had been to New Zealand. I asked:  "Do any extreme sports?"  He laughed and said: "I sat in the back of a bar with some kiwis, that was extreme enough for me." 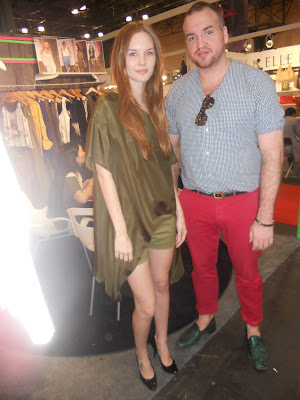 I said yesterday that buyers wear a uniform of black leggings and cardigans. This proved to be true again today except for those buyers who are long timers and feel free to express themselves, like these three pictured below. What was utterly fascinating about the buyers was that they were so decisive. The ones I watched did not dither a second and knew immediately the styles, fabrics and colours they wanted from hundreds of options at every booth. 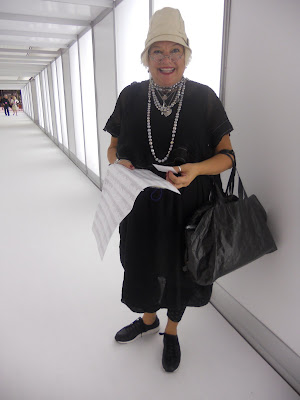 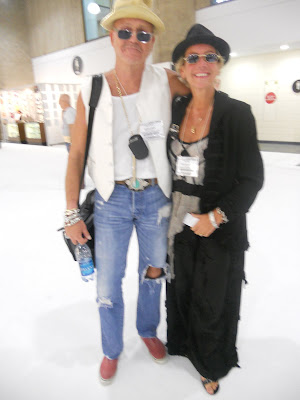 That afternoon I lined up in Times Square (first pic) for an hour for half price tickets ($64, bargain?) I decided to go to the Broadway musical Promises Promises, based on the movie, The Apartment and starring Kristen Chenoweth and Sean Hayes. 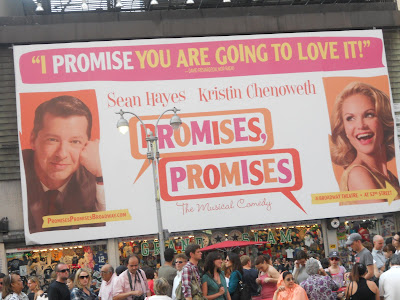 That night at the theatre (pic below) I bought a glass of horrible wine ($10 for half glass, $20 for full glass) in a sippy cup which cost $4 extra. Sean Hayes proved to be a wonderful  singer and perfect for the role as the cuckolded side-lined office kick-around. Kristen Chenoweth was a great actress, but too over-forced sometimes as a singer.  The New York Times said recently that Broadway had suffered from the advent of American Idol as now everyone was belting out absolutely everything and there was no variation in tone.
But there was also something odd about her I couldn't put my finger on. Then I realised, she's barely 5ft and her overblown blonde hair made her look even shorter. The big hair was too big for the mid-century look of the musical, more late sixties than early. She was wearing pale pink lippy instead of red and she was way too spray tanned for that era. I was starting to fixate on her waist line and how she should have worn a  belt and how her blue shoes made her feet look huge. Then I started feeling a little nauseous. Was it the terrible wine and all the M&Ms? Shaking myself I realised after three days in New York I had become the most cringing kind of wannabe fashion critic. Just as well I was going home tomorrow. 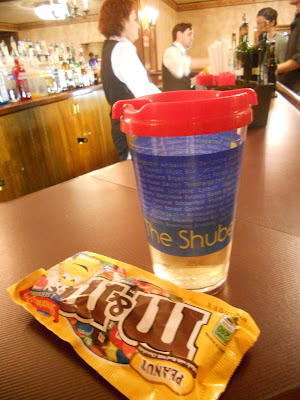 Posted by About Last Weekend at 8:18 AM