This week I'm really doing a mega fashpash. I'm in New York with my friend and designer Lesley  and her business manager Laura who have been selected for the most prestigious ready-to-wear fashion trade show in the US -  Coterie. 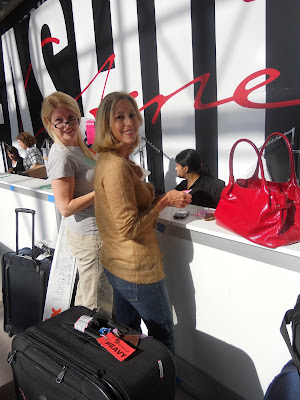 This was to be held at the Javits Center on the Hudson River, where hand-picked designers, both established names and avante garde newcomers, show their clothing to prospective buyers. It was a very big deal for Lesley and Laura to be accepted to Coterie and everyone from home and school was so excited for them.

I don't work for Lesley in any way but I had wanted to get away and see if I could use all our points in one burst. New York seemed not such a shabby idea and I was looking forward to being the third pair of hands in Lesley's booth and seeing behind the fluttering scenes of the frock business. The taut, thin spray-tanned underbelly of the industry. You get the picture. I had imagined swanning around in nice frocks and highest heels, being plied with lashings of champagne and nibbling on tasty yet non-fattening morsels.

It all started out according to fashpash plan when I was bumped up to First Class. I am so used to turning right instead LEFT once inside the plane, that I did turn right out of habit. No worries, I was totally cool about it and I'm sure noone knew I had never been through the curtain before. "Excuse Me! " I called through the aisle, "Got to get through to First Class. Forgot I was going to First Class. So sorry!"

Meanwhile I was starting to think this fashpash thing was quite hard work and not quite enough swanning around after all. For starters, Lesley and her partner Laura, above, hauled five bags-full of dresses (90 of them) onto the plane, off the plane, back to the Meridian Hotel and next day to Coterie for set-up. I also knew they had spent months getting the 90 sample dresses ready and printing line sheets, which are details of every dress in every style, every price and every colour. Then there are the hand tags, photos and setting up meetings.

On arrival at the hotel, Lesley spotted Queen Latifah heading in before us and I rushed after her discretely with my camera but lost her. Good sprinting Queenie!


First day we had to get up at 5am our time, which truly was not so glamorous either for me or anyone who had to gaze upon my not so fair features. Our taxi arrived at the Javits Convention Center where we were going to spend the day setting up and it was hard to believe this vast, empty hall was going to be a bustling floor full of fabulousness. 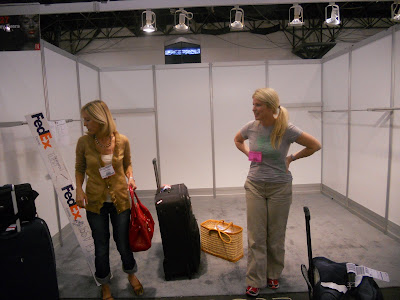 We were given our pink badges and our booth number. The booth looked stark and hollow. Lesley ironed the dresses, while Laura and I strung rick rack through the name tags on the dresses. From 10am onwards we waited and waited.... for the table and chairs and boxes of hangers to arrive. 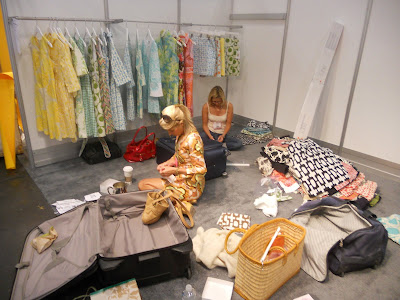 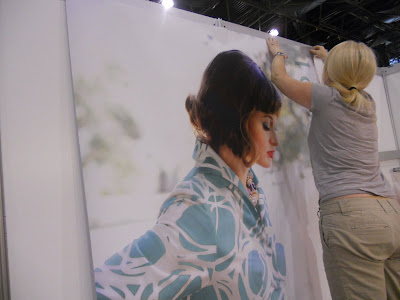 I must have been making a jolly  nuisance of myself because then they sent me out with the very important job of buying old-fashioned looking flowers and candy. I was going to take this seriously. I may have also done a bit of shopping and had lunch ...and even walked through the High-Line railway turned gardens in Chelsea. But I returned with white roses from a superette and lemon heads from Elini in the Chelsea Market and I think they were rather impressed with my industriousness.

When I returned...er..several hours later, Laura and Lesley had good news. No, the table and chairs hadn't arrived but their new PR person in New York had told them they may have a story and two pictures in the November edition of More magazine.


By 5.30pm, we were all starting to flag and mostly things were done. I couldn't believe how fresh and perfect it all looked, from Lesley's grandmother's silver jugs and bowls to the stunning poster photographed by a blogger called Piewacket. 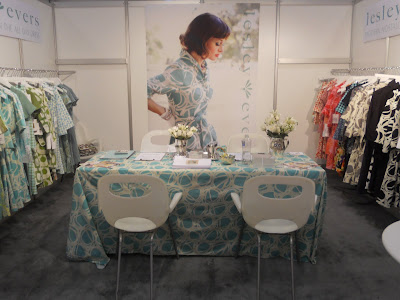 At last it was time to go back to the hotel, for me to write up the day and for Lesley and Laura to a meeting with a potential agent. It was midnight before we were in bed and I for one was exhausted. And the trade show had not even started. I was beginning to have serious doubts about my new (albeit unpaid) career in fashion. It was just too much hard slog. Maybe I'll have to look elsewhere for my swanning around in high heels and drinking champers job...Anyone who knows of such a position, you know where to come.
Posted by About Last Weekend at 6:54 AM