How to Ski and Ride: It's Opposite Day!

We're been up here in Tahoe skiing and snowboarding all week. It's not always self-evident but I have taken lessons in both for years; in France, Switzerland, Utah and Tahoe. You could call me the International Lesson Queen. Or, after seeing me ski and ride, the Worldspan Absolute Beginner. 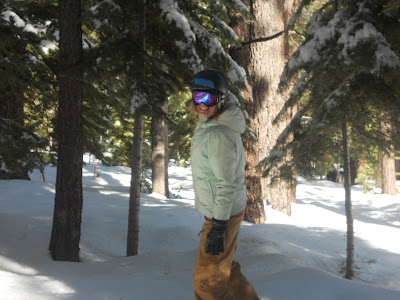 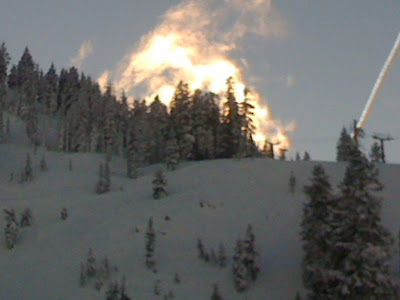 For some it might seem like the most fruitlessly inane pursuit in the world, handing over hundreds of dollars per day for the privilege of clicking plastic sticks on your feet and skidding down snow with a drippy nose and sore feet. But with the wind in your goggles, and a bellyful of Mountain Cafe transfat and sugar, is there any better feeling in the world?

For sure you can spend many years not mastering it. I have studied the frustrations of the big-toe little-toe, heel-toe nonsense all over the world. On the Chanel-clad slopes of Champery in Switzerland (where I was a young, foolish Chalet girl, but that's another story) to the duct-taped boots and down-hominess of the steep slopes of Alta, Utah. And what I have learned from all those years of listening, doing, paying and more paying can be distilled into just a few short (and slightly crude) adages. So this is my Christmas gift to you for being such great readers and friends in the six months since I started this blog...

It doesn't matter if you're skiing, riding, or telemarking, the principles are the same.

1.  Are You Smarter Than a First Grader?  Try not to be.  Most of the truest wisdoms are at the level of my six-year-old, Cy.  And aren't all of life's best lessons learned in First Grade? Any instructor who starts drawing in the snow with his pole, talking about fall lines, equidistant whatsits and putting crosses through circles and wiggle lines has lost me.

2. It's Opposite Day! This is something Cy says. As in "Tallulah, you're so beautiful and smart...sucked in - it's Opposite Day!" or "Harley, you're such a cool dude! Fooled Ya! it's Opposite Day". I won't bore you with any more of Cy's linguistic gymnastics but whatever you think you know as a sane, logical adult, just forget it. Because every move you make on the snow is counter-intuitive. You have to head straight down the hill. Just go. Yes, now, go! Not all the time but for some of it. If you don't head down the hill you won't turn and you will fall over. So it's all about...

3. Dive For Danger! This is the classic from the instructors in Alta Utah, the least pretentious, wisest instructors ever. Just point your nose down the hill and diiiiive fooor daaanger! Then turn.

4. Push The Bush! This is one my friend Sally got from a telemarking clinic. Women tend to lean forward when they bend their knees which is called - by me anyway - the "LC" Lavatory Crouch.  (Apologies to Lauren Conrad, she seems a very nice girl with good skin). LC feels nicely safe and bendy but in fact causes you to lean backwards. With snow sports you need to stand taller than you think.  This phrase struck me as total genius and is one I passed onto a ski clinic in Alta. It had a mixed reaction: some women giggled, some nodded, recognising an Aha moment,  and from just a few -  appalled silence. Then those few murmered "Oh disgusting" and avoided me for the next three days. Their loss and I'll bet they are secretely taking advantage of my words as I write. The Instant Expert never takes offence, as with all visionaries I accept there will be the doubters.

5. Pee for Distance! This is another jolly good one, similar to above and resonates with both men and women, even if you've never had to teach a little boy how to hit the toilet. Our snowboarding instructor here at Alpine told us this one just two days ago. When you finish the toe side turn, then pee for distance. This gets you up and stretching out in front and not on your back board. Pic below - not getting the distance. 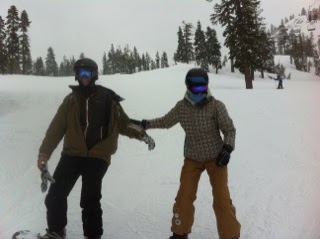 6. Hold Your Shoulders Back and Put Your Best Points Forward: This is one from my mother, Madeleine, an all-sound superb message for life really but does just as well on the snow.  Again it gets you standing up straighter, not slumping. Also handy for looking better in clothes and instantly eliminating poochy tummy. I'm always quite amazed that someone hasn't stolen this idea from Mum, written a book and charged big money to attend "Best Points Forward" conferences in swanky hotel lobbies. Beggars belief someone's not onto it. But this is probably the sort of head shaking you would get from the guys who invented fire, sliced bread and sun loungers with holes to put your face through so you can read on your stomach. "Why, why?"they must say"Why hasn't someone thought of this before. It's so obvious." 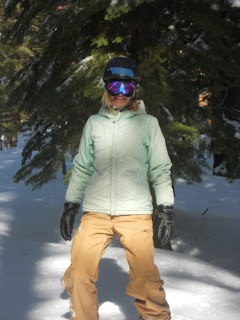 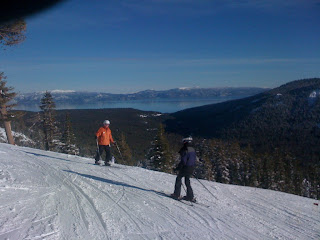 7. Don't Shop For Turns: I know, I know, like me you pride yourself on being a brilliant shopper doing the rounds comparing "investment" buys. Spend to save, it's the only way. Debating whether to pay $100 extra for that Lepore blouse or just settle on the similar H&M one that may fall apart after two wears, yes this is important research. Forget all that. Turn now. Yes now. No don't ski over there to the fluffy patch, oh you did it, now you've lost your groove and you can't make the turn. You're too close to that four year old, you're going to take that old guy out. If you'd just turned back then... 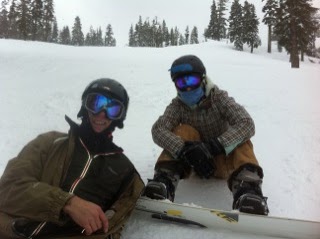 See how easy?
Posted by About Last Weekend at 11:56 AM