When you're up in the snow mountains for Christmas Day, pretty much anything goes. Traditions are cast to the clouds and shredding is only for the slopes not the kitchen.  And this is how we found ourselves sledding and nibbling sushi on Christmas Eve, followed next morning by skiing and packed sandwiches for lunch. And then Veuve Clicquot and ...er,  KFC for Christmas dinner. 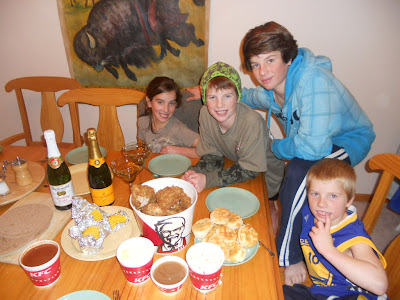 We figured the sushi and KFC would balance each other out and somehow create serenity in the stomach if not peace in our household or on earth.

Yesterday after a morning in the hot tub -  we were all exhausted after five straight-days of skiing and snowboarding  - Kevin took all four kids  - my Hero! -  sledding. They ran, slid, dived and built bumps for four hours. How is it that kids can ski all week and find bottomless energy for sledding? And how is that just that morning none of them could summon any of that energy to push the clean button on the hot tub? Like Kryptonite to them. 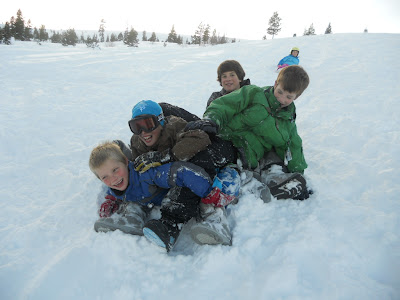 Last night we stopped in at our favourite sushi place in Truckee, Java Sushi, a small nook with knarly dude videos in a strip mall along the highway. Bizarrely for a restaurant three hours inland - or maybe not - their Ikura (salmon roe) is some of the freshest I've tasted and they even have uni (sea egg), which is a goopy glop inside a prickly shell. I used to eat it roasted on the beach when I was young but usually it's a tricky one to order. 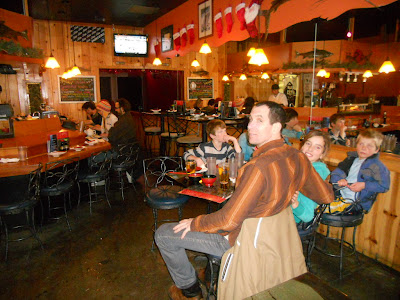 This morning Jackson, 11, woke us up with a 6.30am cry of "It's Christmas!!!"We made them sleep for a half hour extra, then it was open slather. After spending previous weeks collecting toys for refugees in Oakland, we decided not to lavish our kids with toys as we had done previous years. For the refugee families in Oakland those toys will be their only gifts these holidays as they have only $100 a month to spend on food and clothing.

In the end the kids were perfectly happy with their three things. Tallulah was enchanted with her digital watch which she consulted every ten minutes. This is quite a good thing for Kevin and me who have never worn watches and are always looking at the wall or other people's wrists. Cy exclaimed: "Happiness overload" when he saw his Warriors' David Lee jersey. 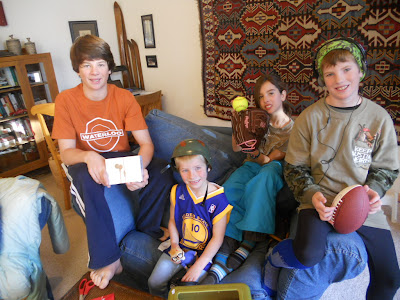 My new efforts to be less materialistic and more saintly vanished when I saw my purple Icebreaker top and embarrassingly I kissed the generous Saks gift card Kevin gave me. Poor Kevin got nothing except a top Tallulah had bought him from The Gap, but he professed to be more than happy with his single gift.  My saintliness is rubbing off already.

The morning featured the usual three-tier palaver of getting into the car. First the kids lolling around in long underwear, then the "comeoncomeon we'reoffgetready" repeated ten times. Then "make your lunch" time when Cy tries to sneak three roll-ups and call that lunch. "Okay. An apple too" he concedes. He loves to suck on ice-cubes so will pack one of those in a plastic baggy. "That ice cube will melt" Tallulah tells him. Cy throws in another ice cube: "The second one will keep the first one cold".

One more round of "comeoncomeon" and at last we're in the car. We insist on them all having everything on including helmets and gloves so we are all roasting for the 20 mins trip. Amid the bickering from the kids in the back I try and focus on the river that runs alongside the road. 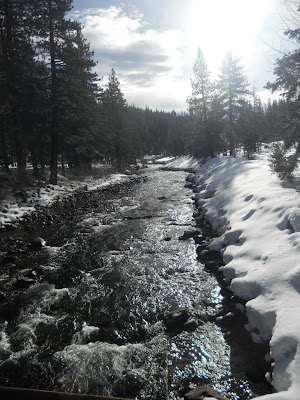 We get a little relief from The Bickertons when they agree to play "SoundHound" on the I-Phone, where each of the kids sing into the phone and the app. judges them each on pitch and accuracy. Tallulah wins hands down each time, a victory for the only girl among three boys.

We all met Santa in the Alpine Meadows carpark as you do... 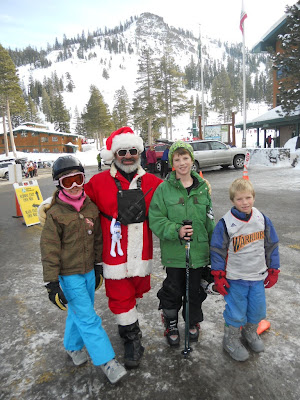 It was an empty day in the lodge, where Tallulah had her pick of the seats while she drank her hot choccy and Cy (in background) had an unfettered view of the Warriors game. 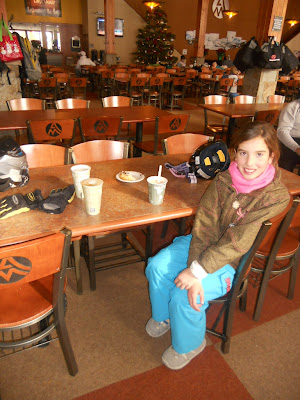 And quiet outside on the slopes as well. 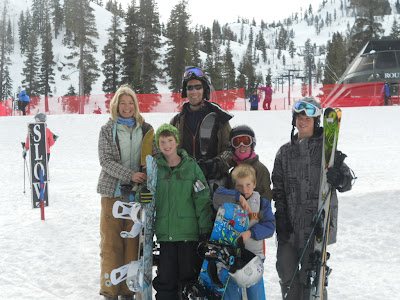 Today we had decided to go for the good parents award and snowboard with Cy, six, and Tallulah, nine, on Hot Wheels run which is neither hot nor on wheels. After spending years getting them proficient at skiing they are now learning snowboarding, releasing us again to the joys of beginner slopes.

Taking the lift up with Cy was the scariest ride of my life. (And I have done bungy jumping over a river and solo sky diving) He spent the entire ride up moving and grooving to his own words of Bad To The Bone, flinging his board around beneath him and doing then doing the actions of Shakira's Waka Waka on the steepest parts. 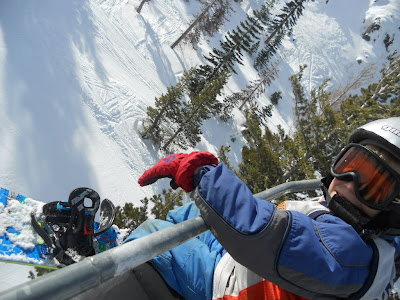 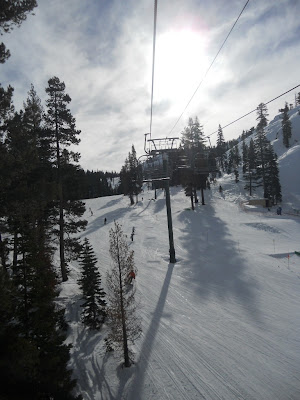 Once off the lift, he straps on his boot, hurls himself straight down the hill and waits for his board to turn and somehow slow him down.

Tallulah is more deliberate and technical with her turns but insists on sedately resting right in the downward path of hurtling boarders and then becomes incensed when they narrowly miss her. 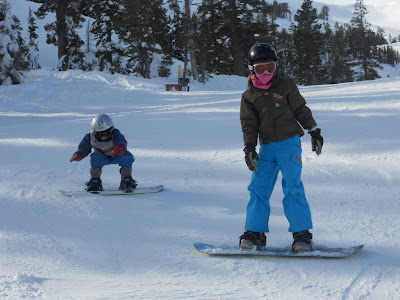 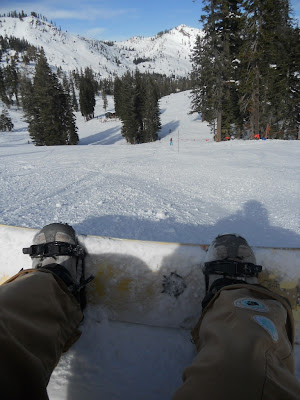 After two goes of this, Kevin disappears inside to find an instructor. I have a reverential regard for ski and snowboard instructors for children. Their patience, skill and bravery (going up in a lift with Cy deserves some sort of award - the Snowy Heart? ) are par none.  Elaborating on my "Opposite Day" theme from yesterday, if the world really was just and good, kid's ski and boarding instructors would earn $10,000 an hour and CEOs of failing companies would earn $9.50 an hour.

On the way home, I spotted the KFC sign and for the first time in 25 years I yearned for the homecooking (well, isn't it?)  from the gracious Colonel.  A very elegant caterer once said cocktails and buckets of KFC were fit for even the chicest gatherings: "Let's face it" he said "You just can't make chicken that yummy yourself".  I handed over $45 and got 20 pieces of "original recipe" chicken and four sides and biscuits which would guarantee at least 6,000 calories for a family of six. Pretty easy to reach that target when biscuits alone are 180 calories each. Kevin ducked next door to Safemart and had to choose between Spumante and Vueve Clicquot. 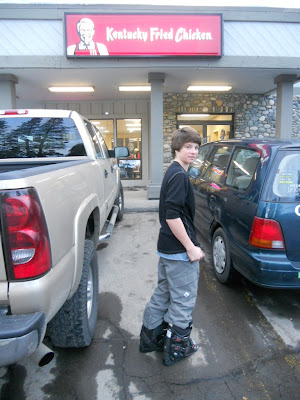 The rest is culinary history...or at least a rather heart-stopping and snowy addendum. 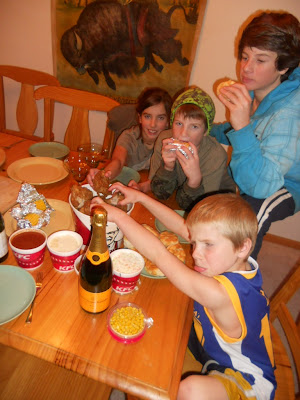 Posted by About Last Weekend at 10:15 PM