Fond readers it was a tranquil Thanksgiving. There was quality time spent with and - as importantly? - away from family. There were many reasons to be thankful; a stress-free day with friends and our kids and a meal cooked by Mike of Kenny'n'Mike. And the next morning saw Kevin and I blatting off over the bridge to San Francisco for a kids-free mini break. 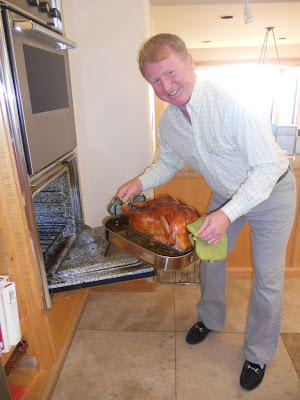 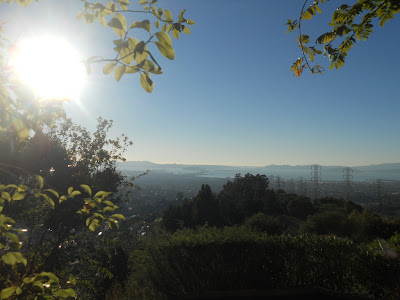 At Kenny'nMikes' house in the Oakland hills we were joined by their neighbours Clyde and Scott so we were a small-ish and happy group. The heavens blazed, the wine glug alugged and the turkey browned... See how lyrical you get when you're not the cook? Red sky pic by Mike. 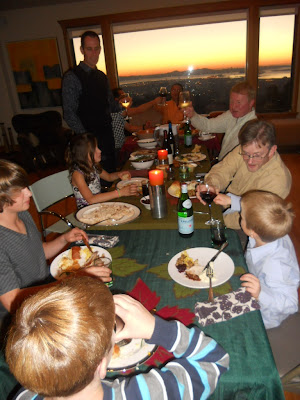 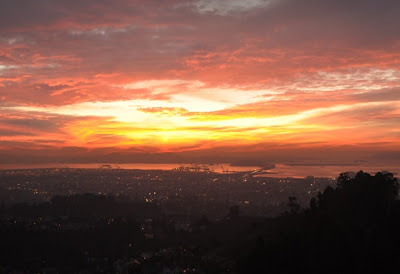 First, how embarrassing that I am a week and half late for this post. More slug-alot than blogger and my only excuse is I am utterly exhausted by too much enjoyment of life. Again with the princely problems and I have promised myself not to drink and eat (well, not constantly)...until next Saturday.

For my Kiwi and UK friends who have not experienced the phenom that is Thanksgiving, it is a day for family and friends sitting around a table of plenty and brown and orange everything, recounting good times and precious moments. That is the advertised holiday anyway. It honors a time when the pilgrims invited the Native American Indians for a three day food fest. This cannot of course have eased the pain of the scenario a century previous when the early settlers bought the island of Manhattan for $24 worth of beads and blankets from the Native American Indians. 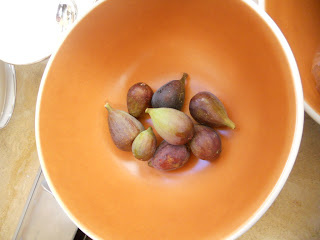 Peace and gratitude with gravy is is not as common as you would think. One of the my friends describes her Thanksgiving Day with the relatives as Little Miss Sunshine meets The Royal Tenenbaums meets Deliverance with all the main characters heatedly debating health care reform.
Here we are leaving home and I thought I would experiment with the coloured tights trends with my bow dress. In retrospect, I should have worn a purplelicous ring or bright necklace or cardigan - what do you think? Tallulah looked just right in her new Holiday dress which will be perfect when we travel to New Zealand summer for New Years'. Why is fashion so effortless for little kids? I guess they don't overthink things. 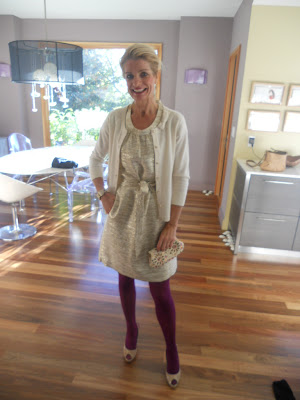 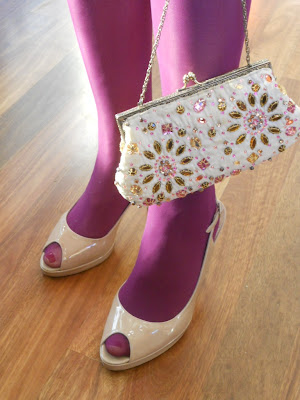 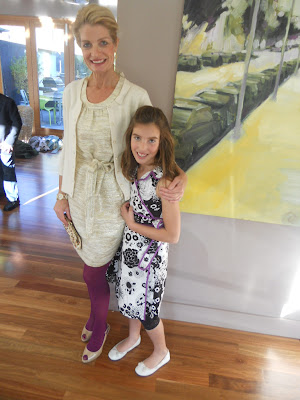 Mike made  Daniel Boulud chestnut celery and apple soup followed by a perfect traditional turkey, mashed spud, gravy and green beans, which is hands down my favourite meal in the world.  I don't usually like creamy soups but this recipe included just a half cup of cream and was sublime. The only problem is you can't drink too much of it  - you'll spoil your dinner. Mike forwarded me the recipes below. Good news: I have persuaded Mike to write a column for AboutLastWeekend every two weeks, reviewing restaurants and the meals he cooks at home. I'll let you know about his first guest appearance. 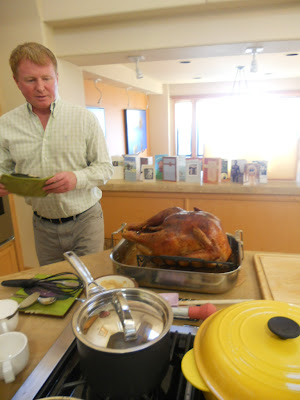 The kids then pulled out Twister and however contorted their limbs got, the sight was not as surprising as when I snapped them later, watching Harry Potter looking relaxed and - dare I say it - friendly. Bottom photo not posed by models. 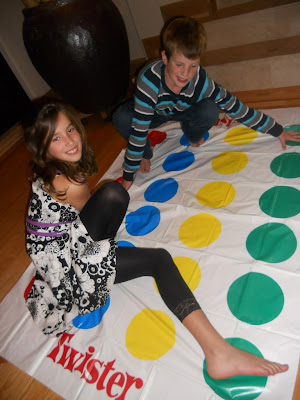 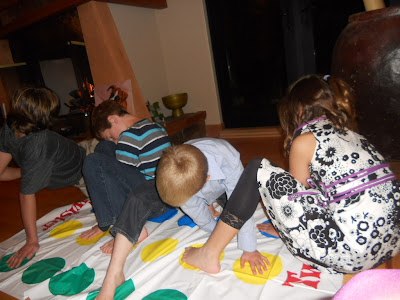 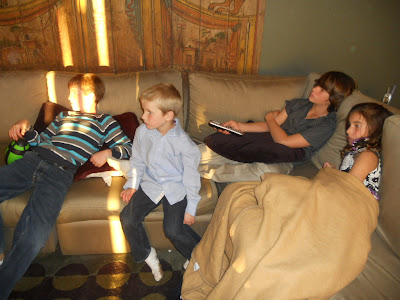 While the kids were watching Harry Potter downstairs and out of earshot, the adult conversation somehow drifted to the machinations of the new dating apps on I-Phone. One of apps in particular is practical rather than romantic, a Mapquest-type guide showing the closest "available" person to you. Kevin expressed disbelief about the authenticity of the photos being posted - that guy is really 500 yards away?! Maybe the guy pictured in the Men's Health magazine on his living room floor...


Anyway, yikes: don't ever send me out there again! Mind you it's not as if my Wellington University (NZ) dating experiences were that Jane Austen either. A raised eyebrow over a beer resulting in being "shouted" (treated) a second beer... There was no being asked out or anyone requesting to fill my embossed gold dancing card. But maybe that's just me.
The next day there was more giving of thanks as Kevin and I loaded our stained bags (Tallulah calls them "rolly trollies") into our battered Dodge Caravan and waved farewell to the kids. I rested my boots on the dash and we were off for our mini-break in San Francisco.

Tell me about your holidays... 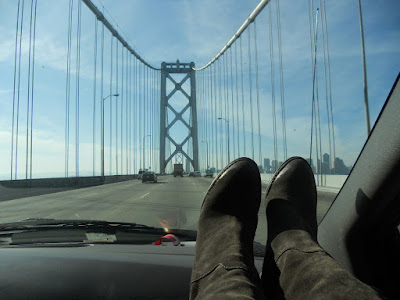 Mike's Thanksgiving Dinner:
The soup recipe is from Daniel Boulud’s cookbook Café Boulud.   Boulud is a famous chef from NYC.  His flagship restaurant is Daniel – one of the best rated restaurants in Manhattan.  Café Boulud is his more casual restaurant.  Here is the recipe for the Chestnut, Celery Root and Apple Soup.
2 tablespoons extra-virgin olive oil
1 medium onion, peeled, trimmed and thinly sliced
1 medium leek, white part only, trimmed, thinly sliced, washed and dried
2 McIntosh apples, peeled, cored and cut into 1/2-inch cubes
10 ounces celery root, peeled and cut into 1/2-inch cubes
1 bay leaf
1 sprig thyme
Pinch of freshly grated nutmeg
Salt and freshly ground white pepper
3/4 pound peeled fresh chestnuts from 1 1/4 pounds chestnuts in shells, or 3/4 pound dry-packed bottled or vacuum-sealed peeled fresh chestnuts
2 quarts homemade unsalted chicken stock or storebought low-sodium chicken broth
1/2 cup heavy cream
1) Heat the oil in a stockpot or large casserole over medium heat. Add the onion, leek, apples, celery root, bay leaf, thyme, nutmeg, salt and pepper and cook, stirring occasionally, for about 10 minutes, or until the onions and leeks are soft but not colored. Add the chestnuts and chicken stock and bring to the boil. Lower the heat to a simmer and cook, skimming the surface regularly, 35 to 40 minutes, or until the chestnuts can be mashed easily with a fork. Add the heavy cream and simmer 5 to 10 minutes more, then discard the bay leaf and thyme.
2) Purée the soup until smooth using a blender, food processor or hand-held immersion blender, then pass it through a fine-mesh strainer. At this point, you should have about 2 quarts of soup. If you have more, or if you think the soup is too thin - the soup should have the consistency of a veloute or light cream soup - simmer it over medium heat until thickened. Taste and, if necessary, adjust the seasoning. (The soup can be cooled completely and stored in a covered jar in the refrigerator for 3 to 4 days or frozen for up to a month. Bring the soup back to a boil before serving.)
To serve: Reheat the soup, if necessary - the soup really needs to be hot - and ladle it into warm bowls
The other parts of the recipe – the turkey is really simply roasted.  Seasoned with salt, pepper and lemon.  Butter is rubbed on the outside as well as placed under the skin.  Roast at 425 degrees for first half hour, then reduce heat to 325 degrees – baste every 20 minutes.
For the turkey gravy, I start by roasting turkey wings and thighs in the oven with onions, carrot and celery for an hour or so.  Then all of that is added to pot of water and cooked for 4 hours.  This makes a nice brown stock.  Then I reduce it, add white wine, salt, pepper and a roux to thicken.  Add drippings from the roasting pan (with grease skimmed off).
Other stuff:  1)  Cornbread, apple and sausage stuffing; 2) Mashed Potatoes with Cream Cheese and Chives; 3) Haricot Verts with Ginger Butter; and 4) Creamed Fresh Corn.
Posted by About Last Weekend at 1:24 PM