It was all about the Sex Pistols and Showgirls on Saturday night when we celebrated our friend Jose's 50th birthday. 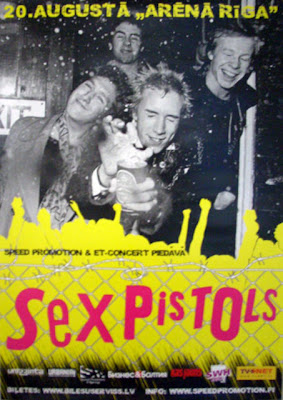 I was wearing my party uniform which has done me proud for more five years; DVF dress, Theory jacket and Zac Posen shoes. Now I've relaxed into it; at first I found the colours and neck bow a bit intimidating. Now I actually tie the bow and swapped my safe black fishnets for purple tights. I wanted  a variation on the straight hair so my lovely hairdresser, Karen, did me a Farrah flip, a more subdued version of a "do" I had as an exuberant 18-year-old. 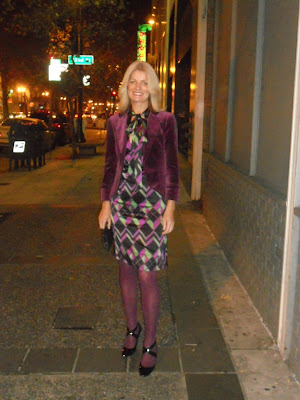 Jose was not even sure that party would happen for a while.  He started looking at party venues in Oakland about six months ago and they were all booked up (recession - what recession?) He happened on Era Art Bar and sent off the deposit cheque that very day without even seeing the bar. Remember we met them on the night when he and his wife, Melinda went to check it actually existed. And the bar did exist!  It was with some relief Jose opened the anonymous door without a sign and it led to an actual place you can buy drinks and dance. Whew!

The Era Art Bar has a warm vibe with an unusual Victorian grittiness and upstairs - where Jose has his party - Urban Daddy, called the "real gem of the place....a pre-prohibition-style lounge." There are tufted leather sofas, honey comb light fixtures, dark glass lights and disturbing art: Marilyn Monroe in the corner with a black eye? Some of us murmered: "Hmm, not sure I like that..." Pic 1 from Era and 2,4 from Yelp 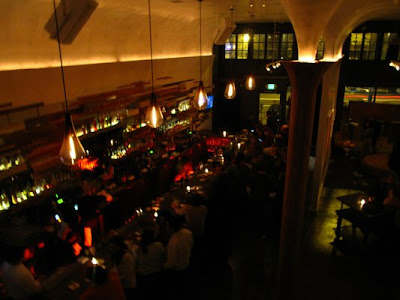 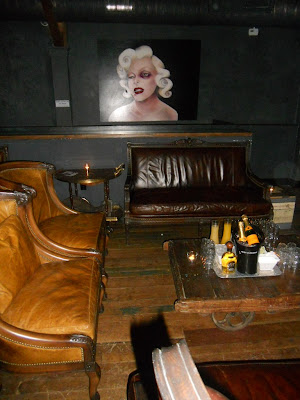 From then on, it seems Jose has always marched to his own beat, always in great shoes and boots. Tonight at Era he wears his red Jonathon Fluevogs - remember those shoes when we went to visit my Kiwi friend Helen? Jose's best friend at university told us that Jose turned up in knee-high purple boots and strode around campus in them all year long. Later Jose drove a checker cab in New York City to pay for graduate school. Now he works as an educational researcher for Washington and is the father of two wonderful girls, one at our school, and husband to Melinda who works for a non-profit alliance and writes beautiful poetry. 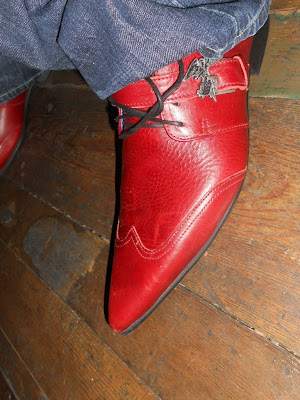 The Era Art bar does a great Managua Sour of lemon line, bitters, maple syrup and Flor de Can 18-year-old Rum.  As with all cocktails which are - too good, shouldn't, mustn't, but will have another one -  the conversation was all over the map; from endangered trees, a name for Nicoles' new Pilates-La Charme oyster soup-4th Street shopping venture (Pilates-epicurous-ista? more on that later) to teenage pregnancy to sparkles in the hair and mice in the cupboard. Our friend Kelly had the best tip of the night: put steel wool out wherever you think the mice might be. It drives them crazy. 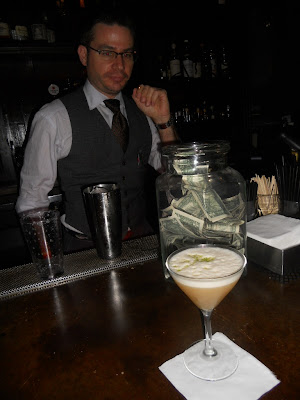 The party was over and five of the last dribble of partygoers, including Jose, thought it would be a good idea to go somewhere along the road called Cafe Van Kleef.  I was exhausted, but the rest were: "C'mon, you're supposed to be the out and about person, you're supposed have a blog about going out. Let's go!"  Gentle readers: I went. I am 48 and still as easily swayed as when I was 18. (Btw, at age 18 you are allowed into NZ bars).

So that was how our little group found ourselves walking across Broadway to what seemed like a ramshackle front with a faded Cafe Van Kleef sign. But first stop was a burger van just outside and we spent some time giggling with strangers - who of course became our new best friends for half an hour - you know how that goes. Our Bronx new best friend pointed how only in the East Bay would you get a burger truck offering organic burgers for $8.75. The Mothership Had Come In for me, - a truck driver in Zac Posen shoes - I added bacon and fried egg to what was the most superbly perfect burger. 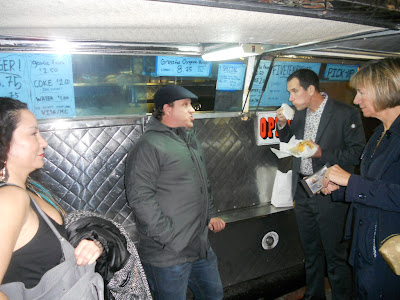 Then into Cafe Van Kleef which is chockaful of taxidermy heads, brass sculptures, Art Deco artifacts from the golden age of Oakland and signed gloves from.  The New York Times calls it "carnivalesque Utopia". As soon as you're through the door, you find youself in what seems at first a tiny, incredibly narrow bar. And then! amid the throng of moving, grooving hats, scarves, tattoos, big hair, no hair and facemasks, you are blasted with the brass and the burlesque. At the back of the long narrow crowded bar was a jazz brass band Bluebone Express  playing their hearts out and the Showgirls, The Hot Pink Feathers who were everything their name suggests and more. Top pic by Cafe Van Kleef. 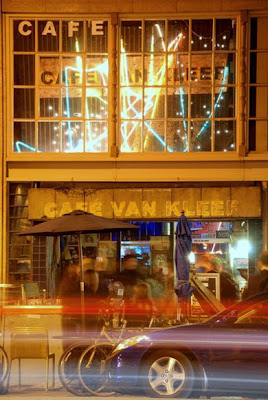 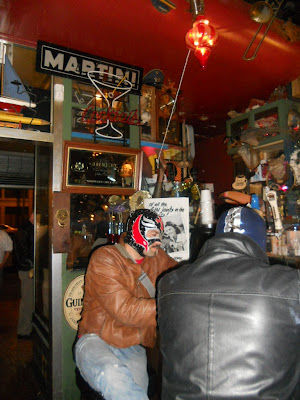 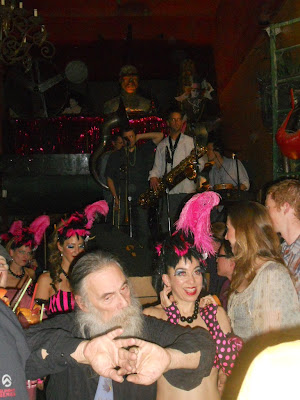 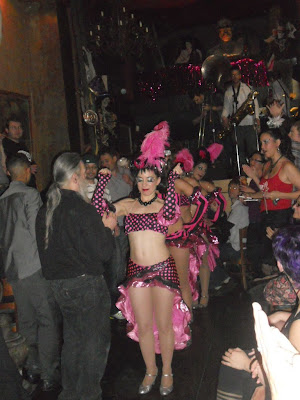 What I loved about the place was that it was hip and happening but with no attitude from anyone. "Leave Your Cool At The Door" one of the bands say on it's website. The saxophonist played rags and stomps and blue "jumps" - not sure what "jumps" are - but it was loud and fun and thrilling. 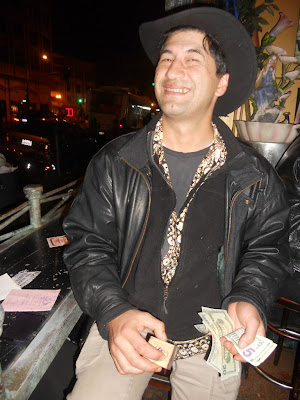 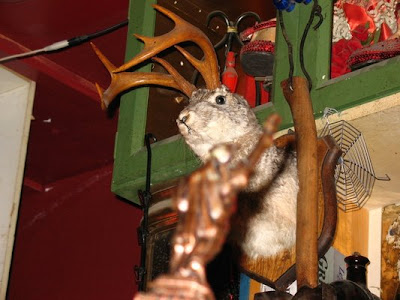 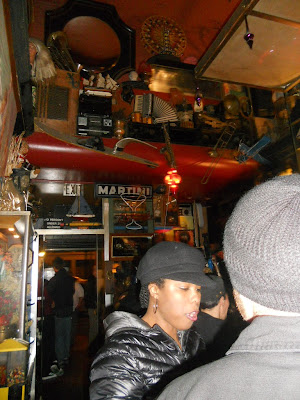 One of the few times ever, I was worn out before Kevin, and I headed home in a taxi, leaving Kevin to discuss macro and micro economics (as you do) with Jose's father who happens to be a respected academic on the subject.  Once I was home, I opened my purse for the house keys - arrgh! left at home. Which was locked! I also didn't have my phone- left at home. Which was locked! The rain was torrential. For the first time ever after telling Harley my eldest to lock every door in the house - he had. The kids were all sound asleep as they should have been, and my door knocking and bell ringing didn't wake a single child.

Eventually I braved the driving rain and ran around to the back in in stockinged feet and started throwing pebbles at Harley's window. He was sleeping the teen sleep of the dead. One by one, the neighbour turned their  lights out, each little oasis of darkness extinguishing my last hope of a soft bed in their guest room. (I know, I know, bit dramatic but I was feeling very sorry for myself).

My Farrah flip had flopped, my purple stocking feet were dripping and my mascara was more than punky dripping. I sat on my stoop, watching the torrents of rain and felt very sad. 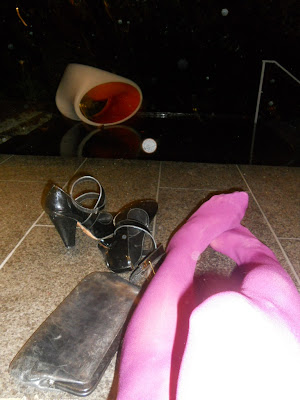 I knocked and rang and pebbled for what seemed like two hours (I don't possess a watch, but it seemed like it) until I felt like crying, laughing, flash-backs of my 18-year-old self getting myself into similar locked out scenarios. There was nothing for it:  I opened the garage door, gathered up some ski clothes and found a yoga mat to sleep on, hoping we didn't have mice and if we did, they didn't run across my toes, because to add to the injury there was no steel wool on hand. I think I slept for half an hour before I heard Kevin's cab draw up. 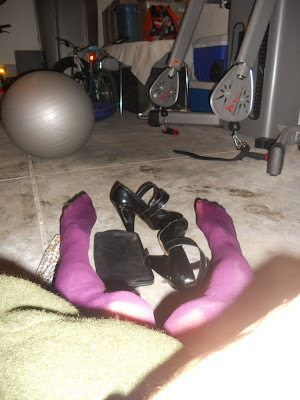 "You can only imagine how scary" I heard Kevin telling a friend the next day "I paid the cabbie and I was walking up the driveway. I heard a weird whirring noise and then I saw the garage door slowly draw up. First I saw the bright purple tights, then the wet dress, then Jody's face."

Kevin is a husband. He knew it was going to be his fault, even though it wasn't technically his fault.  And like any wise husband he squared his shoulders, ready to take the blame. For the rain, for the key left behind and for having a 48-year-old wife who is still as useless as when she was 18...
Posted by About Last Weekend at 11:06 PM