How To Tie A Bow Tie

As our battered, rust and silver 10 year-old Dodge minivan pulled up to the old-world grandness of the Fairmont on San Francisco's Nob Hill I could already see the blank expression on the bellhops' faces. Tourists asking directions, must be, their faces say. No! I feel like calling and waving: Yoohoo, it's us. Here we are - we're staying with you guys.

"I wonder if they'll park the Grey Ghost out the front?" Kevin mused as we bumped up to the entrance. I opened the car door and out rolled: a handful of parking receipts, half a bagel, one month of marked homework and Cy's old SpongeBob underwear.

To their credit, the staff stepped up courteously: "Can we help you with your dress?" one offered as my cocktail frock fell off the wire hanger while I dived for Cy's undies. I looked up from the ground to see a pair of black CC-ed boots and a bag of multi-coloured V's giving us a very wide berth.

Some poor valet climbed in our smelly Dodge to park it in the garage and Kevin murmured: "Lucky guy, sweet ride."

We scrambled through the pretty Alphabet-laden people and up to our room. There was a view of the stairwell and a $8.86 bottle of Evian. Yay! We're in a posh hotel.

Tonight is the benefit ball for HRC which lobbies for equal rights for gay men and women and campaigns against bullying. The Fairmont has generously donated three ballrooms for the event and has discounted room rates. 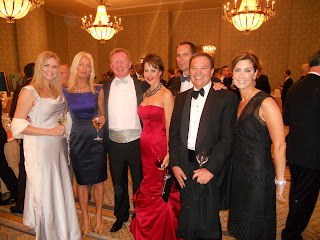 At this stage I'm exhausted after hussling all day to leave the house by 3pm and I'm ready to slip under the covers and watch a $24 B-movie staring Jennifer Aniston. But we put on our duds and join the others. Well, not as quick as that. Kevin left his shirt at home so there is a fair amount of faffing around with some store in the hotel and me readying the iron.

And finally, Kevin must watch the YouTube video on How To Tie A Bow Tie. Again and again and again. This is a "favourite" on every electronic device in our household. Which might give you the impression he is constantly wearing his tuxedo. No, but it is a confirmed obsession. Let's just say while driving to the kids' soccer games on Saturdays he is keeping out a vigilant watch for tuxedo stores where he can buy more bow ties to not know how to tie.

We head to the ballroom which is chocka full of people having a good time. Among the most beautiful in the room are sisters Rachel and Amber, college friends of Kevin from Penn State. (You've met Amber before, she's writing a book about her dating adventures.)

Last year my friend Lisa and I joined some shenanigans in the hallway, dancing and having splits competitions with our BFF of the moment, the "smokin' yogi." This year I stayed seated and listened to all the speeches, from Senator Dianne Feinstein to Brit rugby star Ben Cohen. It occurred to me that this hotel was a wonderful oasis of acceptance. Outside not so much.

In more than 30 states there are no laws to protect gay people from being denied housing or rejected for a job because of who they are.

Our friends Kenny and Mike have been together for nearly 19 years and married - in that short window before the laws were reversed - for three years. They have a house and a life together. But if Mike died, their home and all his possessions would be a taxable item for Kenny - not so for a straight couple. And though many companies offer health benefits to same sex couples, again they are taxable.

So it seems this post is not about How To Tie a Bow Tie. The title is as nonsensical as not giving the same rights to all people. Not special rights, just equal...

Posted by About Last Weekend at 10:56 PM