It's not true that you can't wear a bridesmaid dress again. Mum made me one 13 years ago for my sister's wedding and I have worn it year in year out whenever a long posh frock is called for.

We had travelled from London where we then lived, to my home town of Ohope Beach, New Zealand with our first baby, Harley, who was just three months old. 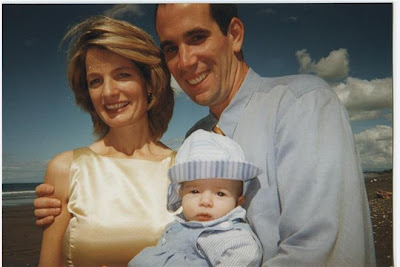 I love this pic - a London basement baby squinting in the bright Ohope sun with a weary "no more pictures" wince. 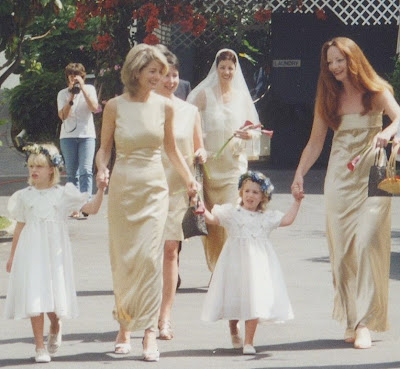 I suspect all my bits were bit more in place back then, but Mum whipped up my frock no trouble and without any fittings. (And then zoomed up my sisters' quick as you like).

Since then I've worn it to school auctions, (as a mermaid with the net and shells pulling it to shreds) to Kevin's 40th , pic below line dancing, weddings, reunions and several Galas. I like that the hem is now a bit draggy and very rough in parts. The dangerous things about having the Old Gold standby is it leaves you to believe that you can spend on jackets, broaches and bracelets. Looking at these pics I wonder, where is that bag, those shoes... 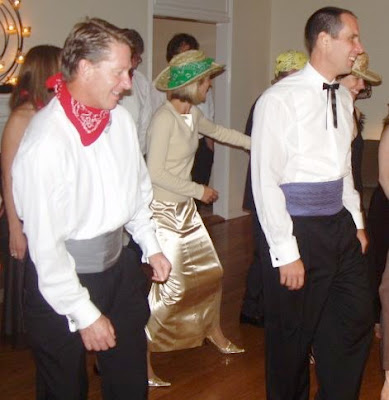 On Saturday night "Old Gold" came out again for the HRC Gala at the Fairmont Hotel in San Francisco.

The Human Right Campaign is the largest Gay and Lesbian lobbying group in the US.  The HRC Gala raises money to campaign for gay, lesbian, bisexual and transgender people. Surely all people should have the right to marry the person they love and get the same inheritance rights and benefits? As Kenny says: "If we can't have the same rights as everyone else, could you give us some of our taxes back?" Quite right.

My purple jacket was a belated gesture towards Spirit Day supporting gay teenagers and standing up against online - and offline - bullying. As a mother and a person, it's heart-breaking to hear about the teens who recently commited suicide as a result of relentless bullying and hatred. I've noticed sometimes the bullying doesn't really stop when people get older. The joke is never funny, that dig is not clever and it's just not on. I know it's simplistic, but can't we be different and similar?

And talking of similarities and not to reduce the issues to a level of banality, but in how many households was the following Bow Tie-Spanx scenario unwinding? With the only difference being that two people were tying the bow tie. As usual, half an hour before leaving, Kevin was re-living his bow tie drama and I was having my Spanx crisis which occurs every time he wears his tux and every time I wear Old Gold. He was playing and re-playing his YouTube "How to Tie A Bow Tie" video, then furiously printing out instructions and huffing and puffing around the house. In the end his bow knot across was a bit chubby but of course I said: "It's looks perfect - just like the video" and he was beaming. And after witnessing my four pairs of Bridget Jones-type drawers and one torn pair of hose Kevin said: "The second looks the best" without breaking tie stride.

Amid the rush, Cy, six, runs upstairs to put on his new "fancy" outfit, a little tux sent to him by Grandma Bob and Grandpa Patty, handmade in Pennsylvania. Cy is always keen to do "fancy". As soon as he gets wind that we're out for the evening he rushes upstairs to put on his navy blue jacket with gold buttons and makes a side parting in his wetted-down hair. His jacket is usually teamed with a striped blue shirt with buttons missing and green A's shorts with soccer socks pulled up, but he's setting some sort of standard. Now he's "fancy all over".

When we arrived at Lisa's for pre-dinner drinks she said " Careful! Jake will jump up on you!" But a few golden lab claw marks make no difference to Old Gold.  Lisa was wearing this amazing LongBD and we both realised we had the same purses. Lisa added faux fur to the mix which is surely always a good thing. 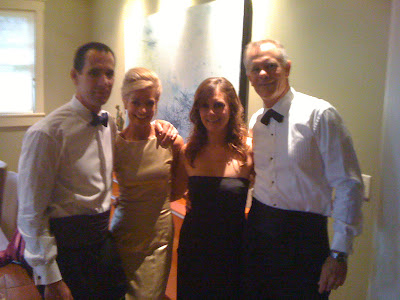 This is the photo before the night started at Lisa's house just hours before I lost my camera, my broach and 10 years of my health. So all pics are courtesy of Lisa's iphone with bottom two from Mike.

Because of the traffic we arrived late and felt obliged to inhale a few quick glasses of champers toot sweet to catch up the other ballgoers. Then we descended to the dinner, still looking somewhat demure. 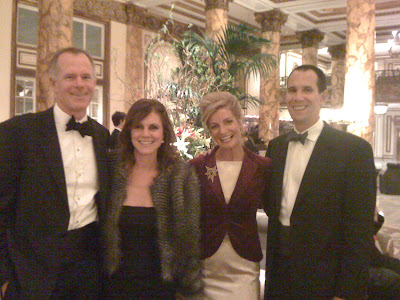 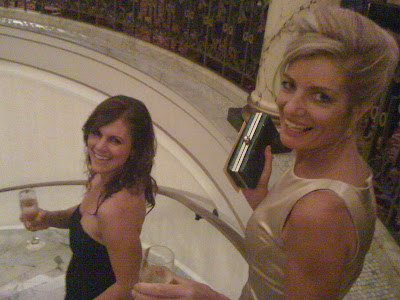 During the dinner Lisa spied one of the speakers heading to the bathroom. "There's Tim Allen!" (or that's what I thought she said). "We have to get a photo with him!" Of course I followed her out the doors to the Men's. We had gathered quite a party around us by the time Tim emerged.  I then realised he was Ted Allen, the cooking guy from "Queer Eye For the Straight Guy".  I suppose it might have crossed the minds of the less brave that Ted would be appalled by us lurking outside the bathrooms. But the truly fearless banish these thoughts and in fact Ted seemed rather pleased by his reception committee and was very polite and charming. It was soon time for him to be whisked away to do his speach. Lisa and I helpfully offered to accompany him on the stage and he seemed sad but had to decline. 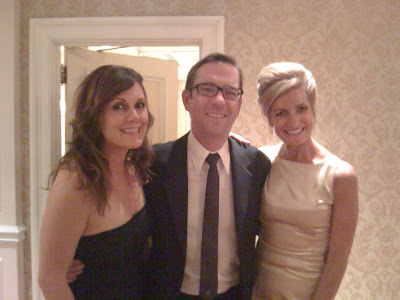 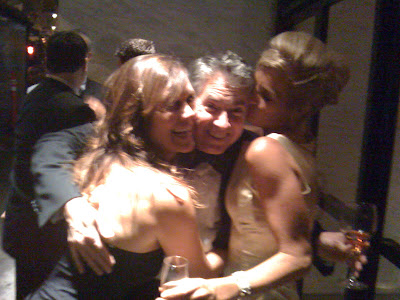 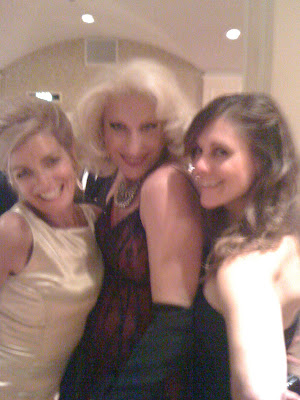 Most responsible ball goers would have headed back to their table, but by this time we had quite the soiree going in the hallway. Our friend Sean (middle pic) appeared with a bottle of champers, the drinking of which sparked people sandwiches with him and Donna Sashay (bottom pic) friend of Hedda Lettuce - (yes, real!). And then - there was nothing else for it. We had to have a handstands and cartwheels competition! And I knew Lisa could do a brilliant splits so that was another good option. Until I remembered my Spanx would show and instead proposed a yoga-off with an incredibly handsome yoga teacher who looked like a much cooler version of Phil on Modern Family. He was able to execute the wildest yoga sequences I have ever seen and left us all not a little ashamed of our piddly downward facing dogs. 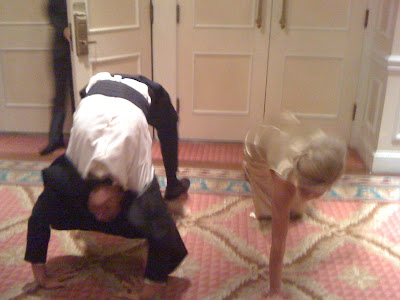 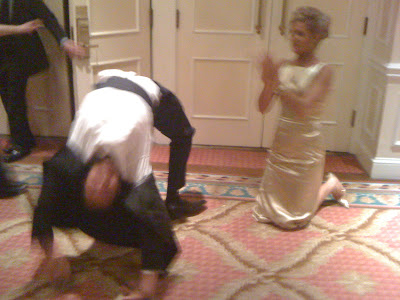 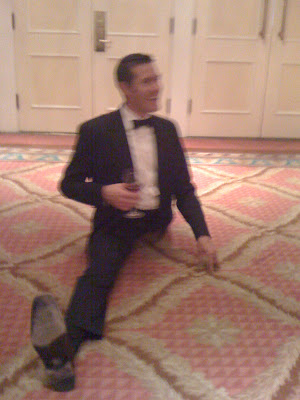 I then had a very in-depth discussion with another young man - who looked exactly like Cam on Modern Family - about Spanx, which he was also wearing. We decided they didn't make you thinner, just smoother. 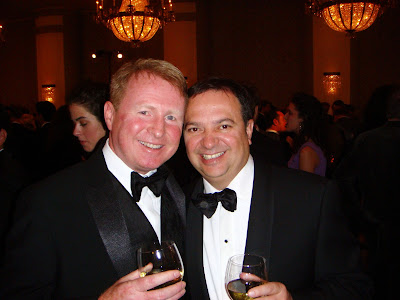 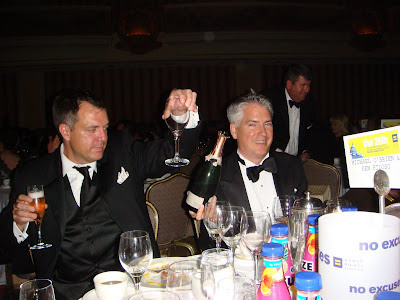 There was lots of upping and downing at the tables, people popping out to watch the San Francisco Giants playing the Phillies (for a place in the World Series).  One of our table, David, was the keenest baseball follower even though he's Irish.

I was disappointed by the fact that Meredith Baxter read her speech...was anyone else? It led me to wonder if she wrote it?  I always loved her quirky charm in Bridget Loves Bernie and felt a bit let down. I would have thought such a passionate and committed cause would have inspired something more rousing and heartfelt.

An enormous roar when up. The whole city of San Francisco and the Fairmont Hotel were yelling whooping and cheering. The San Francisco Giants had just won their game against the Phillies which means they'll be off to the World Series.

Unfortunately - or fortunately -  our Town Car arrived just before the dancing. So I didn't have time to reprise my moves from my last HRC Gala when I may have just slipped and landed on the floor. No worries, I hopped up quickly again and Bob's Yer Uncle. I truly think noone even noticed.

Oh the sights and floors that dress has seen...

Posted by About Last Weekend at 10:32 PM