Did you see that delicious scene in this week's Mad Men where Betty Draper Francis arrives home, takes a can of whipped cream out of the fridge and squirts it straight into her mouth? 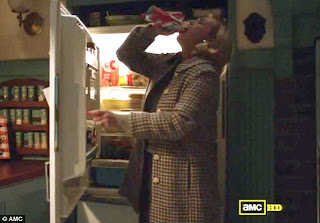 The formerly svelte Betty is now more than zaftig and failing at Weight Watchers.

We see the despondency slowly emerge. When picking up the kids from Don's fabulously modern new apartment in the City, Betty opts to stay outside the door, but her daughter, Sally, insists she comes in. Betty catches sight of Don's young, kittenish new wife Megan buttoning her blouse in the bedroom. Certain other things hint at how much Megan is loved by Don and the children. Betty drives the children home to their sprawling Tudor home in the country and heads straight for the fridge.

More evidence of Betty's quiet misery the next day at Thanksgiving dinner where she serves herself just a few morsels and declares: "I’m thankful that I have everything I want — and that no one else has anything better." As blogger Whitney says: "How to eat your feelings."


Why is Betty overeating?  I've come up with a few explanations - which seems most likely to you?

* While Don was cheating, Betty had an incentive to stay beautiful, she was in a competition. Now that she's married to Henry - who considers himself lucky to have her - she can pig out.

*The willpower she used during the years with Don has left her with no reserves now.

*She's unhappy and bored. But then why is she bored/unhappy now that she has shed the cheating husband and the kids are older? Is it boredom in the bedroom?


Do you ever overeat? Is it when you're stressed, depressed,  bored... or what?

I've just realised I overeat when I'm tired. I am a huge sleeper - I like to get nine hours a night and I also benefit from a nap in the afternoon. (I know, this makes me virtually unemployable.) If all that sleep doesn't happen, I'm feeling droopy and then I'm all over the toasted white Thomas English muffins spread with lashings of butter and gobs of marmalade. (I just ate seven in one sitting) I know it's a funny choice for a scoff, but the obvious stuff - chocolate, ice-cream, cakes (except banana cake) biscuits, cheese and chips - doesn't do it for me. You can tell my family is originally from Manchester - the jam butty is my nemesis.

By the way, I know it sounds counter-intuitive that you avoid putting on weight by sleeping loads. But a number of studies confirm this and a friend who suffers terrible insomnia starting taking sleeping pills, got a good night's rest for the first time in years - and lost 15 lbs in a matter of weeks.

What food fills your Betty moments?


Posted by About Last Weekend at 9:43 PM