Diana, Gadaffi and my kitchen sink

What have Princess Diana, Muammar Gadaffi and my kitchen have in common? Now they have all been photographed by the French photojournalist Frederic Neema. 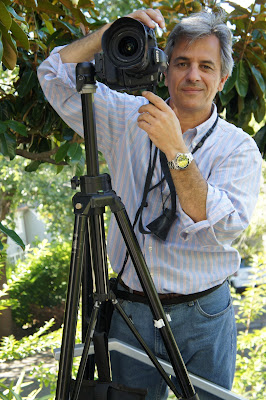 Our architects Russ Dotter and Wencke Soljeld asked if they could bring a friend called Frederic to photograph our house for their new website. I didn't know Frederic at all, but I planned to hang around and bug him with questions about photographing interiors.

Frederic arrived with literally a truckload of equipment. He says he usually also brings an assistant and many more lights.  He turned out to be quite the raconteur as he's worked in more than 40 countries covering all the major wars and disasters as well as photographing top CEOs and celebrities. Amongst others, he has met and photographed Nelson Mandela, Pope John Paul11, Barak Obama, Steve Jobs and dictators such as Gadaffi, (who was killed last week) Saddam Hussein and Mubarak.

I was surprised that although his career was sometimes dangerous and sometimes glamorous he enjoys shooting homes: "I love to shoot interiors because I appreciate architecture. I enjoy the full creative control during a photo shoot as well the technical challenge."

Now living in Oakland and his wife and three children he's left behind the dangerous job of war, journalist hanging out of helicopters and close to the line of fire, but I noticed he did not think twice about perching precariously on our front steps to get a better shot. And funnily enough he was also uncomfortable with me taking photos of him.

Frederic said "You have to create a mood, it's all in the details." To that end he dried damp spots from the rain, moved plants and vegetables and weighed in on the colour of towels in the bathroom. An experienced handyman he even took out a side window to get a better shot of the stove and fridge area.

Before loading up his equipment into his truck we got the Frederic celeb treatment: "Work it!" he joked getting a photo of me, Russ and Wencke. The amount of work he put into this one assignment was incredible. He had been at our house for more than six hours and had many more hours in front of him on the computer to create that perfect shot. I can't wait to see Frederic's photo of our house and posting them here.

Muammar Gaddafi: I photographed Gaddadi several times in my career, in Libya and other parts of the world. He always struck me as a bit crazy but a great showman. Any picture of him would get excellent play worldwide. I remember the day he showed up at an Arab summit in Algeria wearing a white glove à la Michael Jackson. The entire buzz during this summit was about this. I was in Tripoli during the US bombing in 1986, but the picture of him I like the most is the one of him in Aswan, Upper Egypt, riding along ex-Egyptian President Hosni Mubarak who was driving. It was so unexpected that it created chaos among the journalists. I jumped on the hood of Mubarak’s Mercedes and managed to get the best shot before being whisked away by the security.


Saddam Hussein: Gaddafi was a bad man but Saddam Hussein was worse.  I never dared doing anything wrong around Hussein.   He was so scary that even his ministers turned white when he looked at them.


Princess Diana: I photographed Princess Diana when she visited Egypt. She was scheduled to visit a pre-school. The British Embassy in Cairo hired me to shoot this visit. The goal was to take enough good pictures to make a photo exhibition of at least 40 pictures. That was a challenge because the tour was supposed to last only 45 minutes. The good part was that I was going to be the only photographer allowed inside, while the rest of the press corps was kept outside. The tour went smoothly and she was very nice and cooperative. We chatted a bit but unfortunately there was no time for real conversation. She felt at ease after I told her that I was there to catch her at her best.  I remember her as very sweet and kind. She was a real princess.


Frederic: Five things to remember when taking a photo.


1. Photography is more than just capturing images with a device. It is a language.
2. Having the best camera does not make you the best photographer. Cameras are just tools.
3. Pay attention to details. If there is an element in the picture that is not relevant, you should have framed differently.
4. Humans react better to warm colors than cold colors
5. Know everything about your camera. Read the manual from start to finish.

Posted by About Last Weekend at 8:55 PM