Leave Everything On The Court

Sorry, somehow I had a prolonged bloggy break. I took one day off and it became two weeks... What happened in the meantime? For one thing Steve Jobs died.  I didn't know much about him as I'm a bit of a Luddite. He created Apple, which is 40 mins from here and Pixar is just down the road. Who was Steve Jobs? An I-God who changed the world for all time? Or a blimin' big meany who made his staff cry and simply made talky and writey stuff look skinny and sweet?

He was for sure, fascinating and inspiring. A friend sent me the speech Steve Jobs made to Stanford University in 2005 and it started ringing bells for some reason. Jobs tells how he started College but then decided to leave: "After six months I couldn't see the value in it.... " Who does that remind me of? Our seven year old, Cy.


On Friday I picked up Cy from his second grade class and ask that parental standard: "How was your day?" He gave the same grumpy answer he's given off-and-on since kindergarten: "Oh, they're wasting my time....wasting my time again."

As though they are distracting him from his proper day job of fielding million dollar endorsement offers,  placing bids on large commercial buildings and advising the White House on the debt crisis.

And instead of ruling the world from his corner office on the 26th floor of the TransAmerica Pyramid, he finds himself in a classroom struggling to sit on a rug "cross-cross apple-sauce" and to resist blurting the haikus of "hiiilaaarious" nonsense that enter his mind. Let's just say the path to the principal's office is not an untrodden one for him. Every day I wince, afraid to ask: "Any notes from the teacher, Cy?"

On the way to soccer yesterday he said: "At College if you don't go to class, are you sent to the office?" What would you be doing instead of class, we asked. Watching NBA with my friends and eating pizza, was his quick-as-a-flash answer.

Cy has two gears: howling raging indignation and beaming brightness. In fact his every being follows Steve Jobs' exhortation in that same Stanford speech - live each day as if it were your last. Or as one friend says: Cy leaves everything on the court. He wakes up each morning with a smile on his face and singing a snatch of Cody Simpson. With a cracker in his hand and a trail of crumbs behind him, obsessively checking scores on ESPN.com there is literally nothing else in the world to complete him.

Until we're ready to leave for school. It's 8.15am and he's wearing an airplane headrest, ski gloves, tweed men's cap, pajama pants, no shoes and he's drawing "Go Penn State" on his chest. Asking if he has made his lunch yet evinces howls of rage "Why, why why me??" even though he's been up for two hours.

The lunches. Because Cy has lost at least 20 lunch boxes he simply grabs whatever bag is at hand:  the blue plastic in which the local newspaper arrives, a large brown grocery bag from Trader Joes or  - if he can't find anything else - an 18-gallon trash compactor bag. Standing at the fridge he chucks in a couple of handfuls of Goldfish crackers, two apples and random leftovers from last night like lamb chops (unwrapped) and a jar of peanut butter. He looks in his 18 gallon trash compactor bag, nods his head, his work here is done.

Steve Jobs concluded his speech with: "Stay hungry. Stay Foolish." Cy thinks nothing of disrupting the house, the laundry, and everyone's room to find that perfect soccer practise t-shirt.  You see his team all take their shirts off after practise and whip each other with them. Turns out, it's a bit of science finding that perfect whipping shirt.

Finally, his lunch in hand, his shoes on, he dashes out to the car and swings himself through the open front window of the car into the back seat (his latest trick). He grins and sings all the way to school. 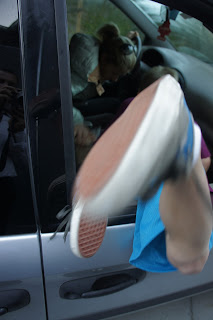 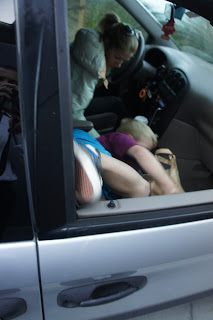 The other day I dropped him off at school in the blurring, howling rain. He jumped out the car with no raincoat, natch. Instead of running for the shelter of the front entrance as everyone does on a rainy day, he walked round to the back, to the playground. He had a huge grin on his face, he must have been thinking about seeing his friends, shooting some hoops or kicking the ball around...

I parked and watched as Cy splashed onto a completely deserted playground. The torrential rain almost eclipsed his tiny figure on the vast empty blacktop.  I saw Cy raise his arms and his face to the rain:  "Why isn't anyone else out here?"


Posted by About Last Weekend at 9:16 AM