Were you a nerd, headbanger, jock, sorority girl or slacker at College? Or something less definable? There was much discussion of this on Saturday night at our Beer Pong party, a peculiarly American university game steeped in tradition.


Beer Pong, also known as Beirut, is a drinking game where players throw a ping pong ball across the table with the intent of landing it in the beer-filled cup on the other side. The loser has to drink. Our rules were much more sophisticated, natch, whereby mixed doubles play ping pong and try to land their ball in the cups on the either side. Because this was a fundraiser, we did not make people drink, decorum is always maintained at our parties.


This was a fundraiser party for our kids' school and 25 couples bid $400 to attend. Six hosts, including us, pay for all the food, drink and entertainment. Your head is probably spinning with all our school fundraisers  - the reality of an Oakland public school where parents have to make up for the financial shortfall. (Other themed fundraisers:  New Orleans, James Bond, Mad Men, Vikings, Saturday Night Live and Peace, Love and Green.)

Grog: Our two barmen from Paschal's Events invented the "Peanut Butter and Jelly" and the "Dad I need more money for books" cocktails. The keg of beer was suprisingly popular too.


Tucker: One of Oakland's most popular taco trucks was parked out the front of our house serving a selection of filled soft tacos. Celeste's family has been in the same spot for 25 years, long before food trucks became part of the roadscape in California. Followed by late night pizza, ice cream bars and cookies. 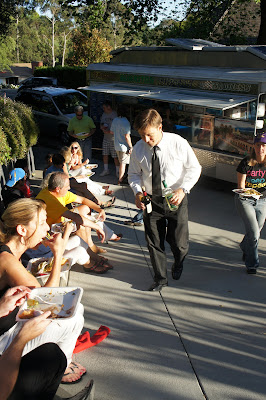 Prize: Our co-hosts were MacGyver blokes who can fashion anything from a 2X4 and a No 8 wire, as we Kiwis say. They strung up lights so we could play to midnight and fashioned this trophy.


Hosts wear: Party, Sleep, Repeat t-shirts. I had a confused style at Uni which I tried to re-capture.


Random memory...I cleaned a lot of houses to support myself at law school.  I was a brilliant cleaner but a poor to indifferent law student -  if the lecturers knew me at all it was because I had repeated their class or I was always in their office begging for extensions on my assignments.

One day I was called into the Dean Of Law's office. I assumed I'd been found out...was it wrong to "collaborate" with a brainy friend on the "How to Use a Law Library" assignment? Everyone averted their eyes as I walked the aisle of shame to the Dean's office.
Once in his office I recognised the Dean -  I cleaned his house.

Dean Of Law: Would you like to be one of my research assistants for the summer?
I was astounded  - this position was only offered to the brightest and keenest in the class and was immensely prestigous.
Me: I think you've made mistake - have your seen my marks?(grades).
Dean of Law: Yeees...I wouldn't normally offer you the position. But....you're such a good cleaner!
I couldn't even use the library, how could I do this job? I had visions of hiding in the law library loos all day.
Me: I'm so sorry....That's very flattering, but I've already accepted another job.

Friends, that's how I came to be cleaning the toilets in a campground all summer long.

Posted by About Last Weekend at 4:23 PM