It was a total Thor weekend. Not the epic adventure directed by the fabulous director Kenneth Branagh. (Though of course he's allowed over my place anytime to direct Cy's socks to the washing machine.) More in the way of a Viking party on Saturday night followed by a Big Thaw on Sunday. (Sorry, bit of a tortured play on words I know.) 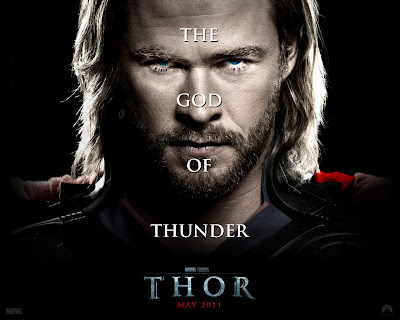 The last couple of months has been rain, cold and thunder here in Oakland and I've worn my Uggs - and ski jacket! - most days. Yesterday the sun came out and I actually burnt my nose. (Photo not available).

The Viking party was a fundraiser for the kid's school. One friend says the parents at our school get dressed up more often than their kids...and that's what I love about it. Usually we love to rumble around charity shops get out the spray paint and double-sided tape and assemble something dorky. But this weekend we ran out of time and just did the store-bought thing.

The horns on my Helga costume drooped immediately providing me with the allure of a 50's football player only heightened by the fact that I might have overdone the mineral-based bronzer (surely worn back in the 8th century?) More floppy than fierce, though my research shows the Vikings were a misunderstood bunch. Rather than being filthy savages as they were later portrayed, they were actually considered at the time to be "excessively clean" by their neighbouring Anglo Saxons, because they washed once a week. Other cultures though noted Viking men all used the same vessel and water to wash their faces and blow their noses. A technicality.

We were in for a night of skul-ing Carlsbergs and seemingly harmless clear liquids from Scandinavia while locking horns with spray-painted football helmets, burlap with safety pics and a ton of shedding faux fur. I got given the nametag "Freydies" (Fertility goddess) and Kevin got  "Zinger" (Swinger) so we were well-matched. 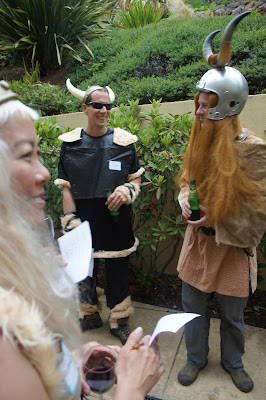 Our party hosts told us was 90degrees in Sweden as we braved the freezing Californian outdoors to stage a log-throwing competition -  emulating that famous Norse tradition - as a whole family of neighbours watched terrified - well, laughing - from their upstairs room.

For once we left early. Kevin’s experience of living in a fraternity house for three years in college had prepared him for the consequences. Leaving a party early, especially one where people are dressed in costumes and drinking shots, is always precarious. Arriving home, Kevin methodically locked all the doors and windows before we retired – at 10pm. Sure enough, three hours later the first faint sounds of Viking war songs were heard in the distance...Kevin rolled over and said, groggily, “They’re coming.”

The remnants of the Viking party had decided to go marauding and had wandered down to our house where they demanded to be let in, fed and watered. "Let them do their best" said Kevin. "It's cold out there, we can outlast them." After a half hour of door bell ringing, knocking and calling out, the explorers wandered off down the street, singing and laughing, content to delay their conquest for another day.

More Norse God-like figures in our weekend. On the way back from Cy's soccer in West Oakland, I had came across these ancient-seeming figures at The Crucible, an ironworks artspace. 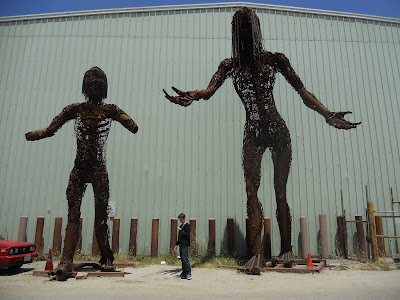 Next day came the Big Thaw. Finally the sun came out, the plants stood up and smiled and I bought my two favourites summer things... gladdies and watermelon.

Any Viking shenanigans over your weekend?

Posted by About Last Weekend at 12:29 PM