My Uncle Fred has died at the age of 93. My journalism teacher always said avoid cliches like the plague, but Uncle Fred had a great innings and was possessed of all his marbles right until the end. My mother, who's 75, has now has lost all her (older) seven brother and sisters. She said: "I'm in charge now!" That was funny and also sad. You never stop being the youngest child.

I asked my sisters to send some snaps of Uncle Fred. They sent some which were, well, dreadful. (I am scion of two families who take bad photos - there is the full shot of sky, the blurry something in the foreground, the awkward side shot of someone's forehead. It's all there ).  But these un-posed un-photoshopped snapshots made me smile like no one's business. 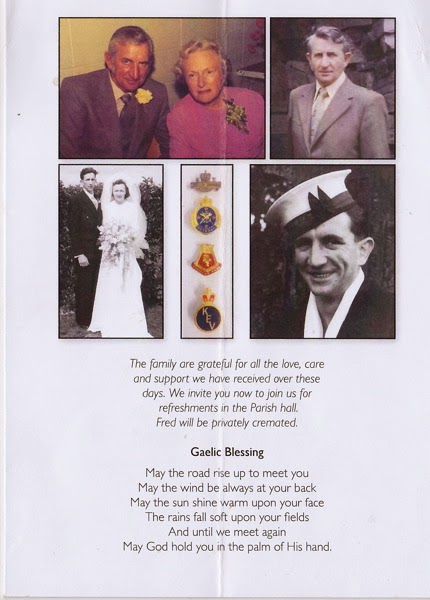 Uncle Fred and his brothers and sisters looked like their Dad, my Poppa. Poppa was from Ireland; a lovely, tall chap with enormous ears, a curly smile and a full head of hair. The kids inherited also his very gentle Irishness. They listened, they waited patiently for others to speak first, they smiled and nodded (and made wicked-funny little asides).

My Dad has always said there was no hurrying the Finn family into church for weddings, funeral and christenings. The whole lot of them would be standing around at the entrance, rocking back and forth, smiling to themselves, waiting for someone else to go in first.

"Oh hello Fred (surprised), fancy meeting you here. How are you?" Little giggle, smile, nod, rock back and forth.
"Good as Gold, Madeline. How's the family?" Smile, nod, little laugh.
And so on.


Uncle Fred loved nothing more than to be with other people, hear their stories and tell his own when it was his turn. He had a new lease of life when he went into a retirement home two years ago and wished he'd gone in sooner. He left behind six children and numerous grandchildren and great-grandchildren.

He was the proper elder brother, taking responsibility for all the family trees and seeming to have endless knowledge of people's to-ings and fro-ings within the family. He once visited my cousin Martin who lives in Camberwell, London. Martin says: "I particularly remember him getting lost in London, us having no idea where he was and Sharon (my sister) coming round and laughing saying that he'd find his way back. We eventually got a call and he was nearby and in good shape. "

At the moment our ten year old, Cy, is constantly practicing his Irish accent. It's just one sentence: "There's no cause for suspicion, I'm just having a pint at the Irish pub." His accent is currently somewhere between Scottish and Russian. Uncle Fred would've had a good chuckle at that.

Until we meet again, Uncle Fred.

Posted by About Last Weekend at 10:34 AM