We laughed, we cried 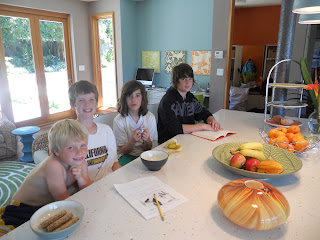 A couple of weekends ago I flew back SOLO to New Zealand for just three days (my parent's 50th wedding anniversary). I called my husband in Oakland (henceforth just called "Kev", because that's his name) at the end of what I knew would be a loooong Saturday for him, looking after our four kids.

"How did it go today?" I asked.
"We laughed, we cried", he answered simply.

That just about sums up every day with kids.
Apparently one thing you should learn is not to ride the rollercoaster of emotions with them. I have not learned that one yet: I'm on California Dreamin' every day
Obviously I love my kids as much as they next parent. Maybe more than some and less than others, I'm not starting a competition here, peeps. My children are delicious.

But let's debunk some myths.

1. Kids don't keep you young, they suck they life out of you.

2. You do not "lose weight running around after my kids". This is what many new-mom movie stars relate breathlessly in sundry magazine articles. Most days you slumping on the couch every spare minute, watching the Backyardigans by default, scoffing a gblob of leftover PB&J's, triple cream mac&cheese and every other carb-infested food that has "&" in the title. You move through a sleep-deprived ether, a "deep-sea diver " tiredness, as the wonderful London writer Allison Pearson said. There is no losing weight or running around going on. New-mum movie stars lose weight by not eating and exercising two hours a day. End of story.

3. Kids are a "tax on innovation" as our friend Stuart once said. You devise a game or a treat. They want it first every day, then every hour.

For example: On night at bed time, in a fit of frivolity and goodwill, you start singing "Wheels on the bus go round and round". By Week Two, your child has forced you to build up to 15 verses, going through all the names of the kids in their pre-school class driving the bus. By Week Three if you miss so much as one child in the class driving the bus (in an exact order) your child has a major meldown.

By Week Four, you pray for the wheels on the bus to drive right over you.

Would you like to debunk some myths?
Posted by About Last Weekend at 11:43 AM