going forward, where we're at is out of the box

What sayings are nails on the chalkboard to you?
Sorry, wasn't listening to your reply, was just repeating "Right, right right, right.."over the top of you.

This is the new art of not listening. Like people who reply "it's aaall good" irrespective of what you've just said. No, it's not all good because I was just complaining about kids-life-school-skin-injured knee-third world debt and diseases. Weren't you listening? 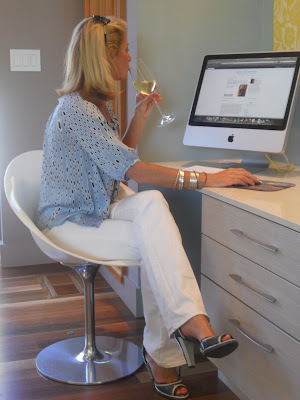 Then there is the mash-up of street and fashion front row sayings, which have been Disney-fied and now they're coming out of the mouth of your nine year old. I didn't know how best to illustrate this post, so I dressed (above) pretending to be a stylish blogger at my computer, crushing on yummy skirts. Love, love, love it.  With a pulled together, day to night look that will take me anywhere.

And then as I really am, (below, real pic by Tallulah) Keeping it real.  Chillaxing amid the debris of the fridge. Wearing my sick UGGs. And just mixing it up with my husband's trackie pants. Big shout out to girlfriend Anne - props babe, you rock! Anne emailed me loads of loathsome sayings last night. 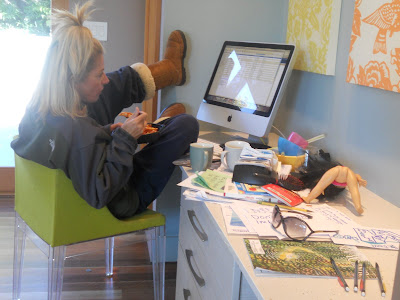 Don't get me wrong, j'adore  silly sayings -  remember my Franglais lessons? But please feel free to give me a punch buggy punch if I ever say: 24-7, With all due respect, I personally, Absolutely (oops I say that all the time), and It's not rocket science.

Another heinous business phrase is "just add some zeros". According to afore-mentioned recruiter friend Anne, some accountant job hunters play loosey goosey with the zeros. For example, in their past job they managed $10,000 in cash, but say: "Oh just add some zeros...bring it up to $100,000,000".

When people take it to the next level, does that still mean they're thinking out of the box or  AAARRRRGGGHH! (sorry for yelling in this blog, but this one's the worst) will they leverage it? There should be a law allowing you to spit at anyone who uses the word "leverage". Unless they are an engineer and they are talking about levers.

This post was inspired by a vintage clothing blog called Dear Golden Vintage. One of the posts talked about expressions she hated and readers responded with theirs. The comments were so funny I snorted with laughter into my latte. Sorry I know that's a bad visual. I agreed with one reader about the new passive way of asking.  Such as "I'm going to go ahead and...", "I'm going to need you to..." , "I'm going to ask you..."  Just do it. Just ask it. Command it. Yell it. Any kind of asking is better than this not asking.

"Going forward" warrants extended discussion. It has become the "at the end of the day" of the business world.  Lucy Kellaway in the Financial Times wrote three years ago about her personal crusade against it, but admitted: "Going forward is with us on a go-forward basis, like it or not."

She points out the phrase is almost always redundant and is simply jargon: ' "If, on occasion, there is a need to spell out the idea of the future, we have some perfectly good words already. For pompous people there is “henceforth” and, for the rest of us, there is “in the future”

Where we're at is another business-speak redundancy. We're all here, we know where we are. Don't say at, please don't say at..

I  do laugh when people find quotes from new movies. But do you know people who are still quoting Austin Powers-Terminator-Kindergarten Cop-Forrest Gump. (still peeps? still?)

My own particular bugbear (what does bugbear mean, stop saying it Jody) is when people say "I could care less".   Really what you mean is "I couldn't care less". What you are saying is the opposite of what you are trying to say.

Are there any sayings you hate? Reach out below. Write inside the box. The comment box.
Posted by About Last Weekend at 9:36 PM

Email ThisBlogThis!Share to TwitterShare to FacebookShare to Pinterest
Labels: Rants