I know it is very late to talk about 4th July, Independence Day, but I've been resting brain and bod after an indelicate amount of indulgence over the weekend. 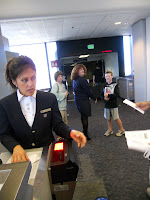 Friday night I saw Harley, 12 and Jax, 11, off at the San Fran Airport as they were flying out to their grandparents in Pennsylvania.

Independent also were Cy, six, and Tallulah, nine, who had a sleepover at our friends, Kenny'n'Mike and their ailing boxers, Athena and Bacchus.  Athena used to be very independent of her brother Bacchus, until she became ill with seizures. She is still able to climb into her own bedroom - named Cancun because it is made of real cans of dog food. A small indulgence. 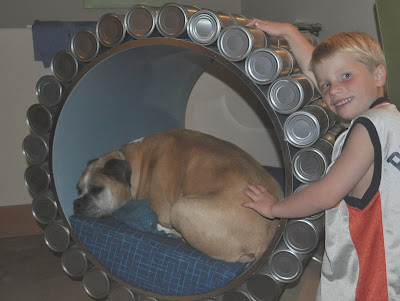 So that takes care of the first two concepts -independence and indulgence. And now for "indignation". One friend says this blog fails to fully reflect the stroppy New Zealand cow that is moi. So here's a glimpse into the paddock.

Technically the eldest boys were flying by themselves, as "unaccompanied minors" for which we had to pay an extra $200.

I expected some sort of entourage for the kids because of the extra $200 charge. But instead I had to walk though customs and stay with them until they boarded,  extending the drop off by another couple of hours.  Once they had gone through the gate hissing 'no pictures Mum!' I naturally felt free to go.

Later at home, we got a call from the boys.  After I left, the plane disembarked because of electrical problems. The airline people were furious that I was not there to sit with the boys until the plane re-embarked and a staff member had to do it. By that time I was sipping a margarita at home and, some would say, getting my $200 worth. 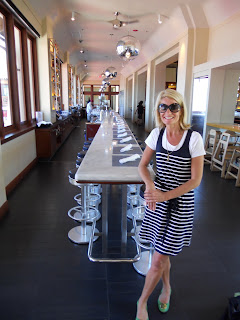 Two days later we were  at the Lake Chalet, on Lake Merritt in Oakland. A wonderful watery setting, a gleaming steel interior and a stellar day. I fancied oysters and asked the waitress which she recommended. "I can't make that decision for you!' she answered indignantly.  That's like waiters who say "it's all good" when asked what is good today. Just have an answer. Of course my question was stupid but what about answering; this oyster's creamy, this one's briney, this one's sweet... And then you're expected to tip 20%. So indulge me!

Phew! Consider this theme tortured.
Posted by About Last Weekend at 9:45 PM

Email ThisBlogThis!Share to TwitterShare to FacebookShare to Pinterest
Labels: Rants