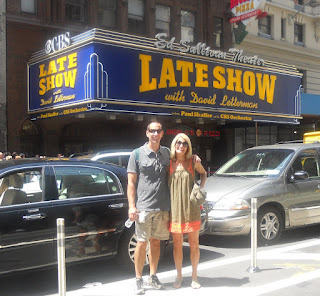 We already had two tickets for Kevin, my husband and his brother, but waiting on one for me. Couple of days before our New York flight Kevin got a phone message: It was "Jack" from the Letterman show. Call back in the next hour. Good news we have an extra ticket. But you have to answer a trivia question to secure the ticket. What kind of shop is run by Rupert, who is mentioned on the show? Kevin wildly guessing: "A shop where you can buy coffee and donuts?" Not correct said Jack who hinted it was a deli. We got the ticket anyway.

Not to be too defensive, but this discriminates against Kiwis, like me, who have never seen the show. Except I have seen a YouTube guest appearance by New Zealand Prime Minister, John Key. Not to be biased, but his ten reasons to visit New Zealand were genius. "Visit in the next 30 days and I'll pick you up from the airport". "We drive on the left hand side of the road, like the British...and  Lindsay Lohan" Laugh or what? His timing was spot on.

We took it to be a good sign that we were on "Jack's Gold List" because we knew there to be lesser metals. And though we weren't familiar with Jack, we knew he wasn't a Tarquin or a Simone who may be flighty and less loyal to his lists. I was ready to adopt Jack and encourage him to play football in Texas.

After running our four kids hard in Central Park to ensure they behave, we dropped them with grandparents and raced to Broadway to line up outside the theatre before 2pm to get the tickets, for a 3.30 show. Once in line we realised this show had hired a herd of interns to monitor us and they were cracking really good jokes. (joke). Many of them were calling out constantly and there was a not insubstantial expectation that you whoop in response. We didn't want to be somehow eliminated for grumpiness. We whooped, enough to seem enthusiastic but not enough to seem crazy and a danger to the show.

Then one of the interns yelled "Have your ID ready ready -  otherwise Steve will be pissed!" We took out IDs so Steve wouldn't be "pissed'. I tried not to meet Steve's eye as we passed.

Once inside, we queued again and emboldened by being inside, asked one of the interns."We're on Jack's Gold list. Is that good?". Strangely she had heard that question before: "Well, to answer that question I'll have to ask you. Is one of your kids the best? Could you pick just one? No? Then...all the lists are good."

Stunned by this philosophy and not a little chastened, we picked up our tickets. Then we joined the line to get back outside. One of the interns wrote a number on our tickets: "Is this a good number?" we asked. It was in the late 200's. She didn't do the "pick your best kid" thing. She simply said: "They're all good".

Just before we were allowed outside, we had to gather around three interns, the middle one who seemed to be doing all the joking and calling the chants. Where are we going to line up? Yellow line!  Were we going to laugh? Yeah!  He was the tallest, had the best lines and looked like a fratboy version of Robert Pattinson. Just imagine being one of the interns. When do you find out you're Robert Pattinson of the queues (the exit guy) rather than just scowly Steve monitoring the IDs on the street? Bummer...

We had an hour for lunch. Then we had to line up again three quarters of an hour before the actual show. The gold line had become a green line and there was no one behind us, which did not look good. We just kept whooping when told.  As before, enthusiastically but not insanely.

Then we were right outside the door to the actual theatre. The theatre was small and every seat was a good seat. But oh no she's talking into her walky talky. NOT a good sign. She's walking over to us: You have to split up. "No problem". Save yourself,  I think vaulting ahead of her, before my husband and his brother.

The show itself was much less drama than the queueing which was probably not a good thing. Two of the band wore shiny stockbroker ties from the late eighties and Letterman wore a yellow one. One guy had a floppy blonde fringe (bangs) and hi-tops. And was older than me.

At least 15 bods (not including the cameramen) were standing around chatting, laughing, picking their ears and yawning. And I was actually watching them rather than Letterman. At great length Letterman introduced a story about how much his puppy yowled. Which was just about...how much  his puppy yowled. Letterman is very likable with his downward look and curly smile and was at his best when we knew for sure he was ad-libbing as when his screen kept going blank. But not $60m a year likable.

Nicolas Cage came on stage. Nicolas Cage is one of those actors you just can't get excited about and he didn't disabuse this view. A tan or make-up mark at his jawline, his hair thin but boomphed up and not a soupcon of charisma. His first story about getting stoned with his cat seemed forced and rehearsed. The rest of his answers, non-committal.

The young band from New Jersey seems good mates and very nice boys (lead singer apologised to one of stage hands when he crashed into him) but they were more than a bit pitchy.

The low point was a bizarre foul-mouthed ranting by Alan Coulter, even less funny than the dog howling scenario.

I am hoping this post will spearhead a Betty White-like Face book campaign to get Mr Key, New Zealand Prime Minster to host the Late Show. Using his own writers.

I know John Key is probably pretty busy running New Zealand but he could do it pod cast style from Wellington. And with a convenient 20-hour flight to New Zealand for guests, it might sort out the sheep from the goats. Or at least give them extra time to rehearse their rehearsed answers.
Posted by About Last Weekend at 9:29 PM