You haven't met a bad Santa until you've been to a Swiss Christmas Party. On Saturday night I was lucky enough to hear all about his dreadful doings. And we're not talking a bit naughty - the Swiss Santa is followed by the Grim Reaper and he takes wayward kids back to the Black Forest in Germany and makes them work for a year. 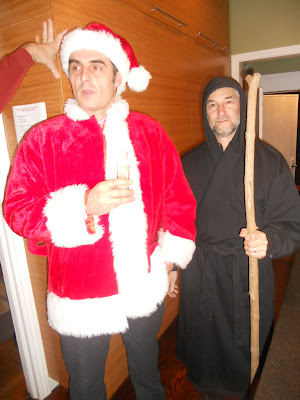 All these charming fairytales were told to us by Fredi, a wonderful Swiss raconteur who is married to Wendy, one of the Mums at school who has lived in Oakland all her life.


You've met Wendy before, she's my main culture dealaah as she actually goes to all those plays, events and concerts that are the reason you live in a city like Oakland, shaming me into going with her. The party was all the more richer for Wendy's childhood friends who had some pretty hair-raising stories about their teenage years together - which was a bit disconcerting as we both have just-teens.
Every year Wendy and Fredi collect naughty and nice stories about their friend's deeds during the year via their partners or spouses. At the party - which they've been doing for 10 years -  Bad Santa sits besides Schmutzli (Grim Reaper) and recounts the year's three top naughtiest deeds to all, including the blushing protagonist. Who is punished not only by the obvious embarrassment but being forced to do vodka shots amid bit-off rugby chants. 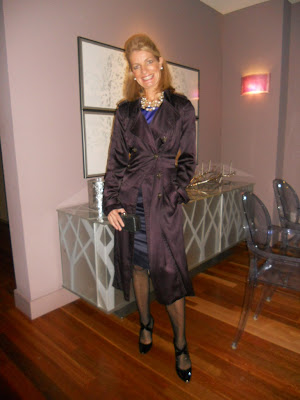 On arrival we were treated to cocktails made by Mary and named after laydees of the night around the world. The best was the Kiwi cocktail "Moll" made with loads of lime, but I also loved the purple concoction (natch) called Flower Power, Free Love By The Bay of creme de violette. Other inspired cocktail idea: Southern Bell; bourbon and peach liqueur, the Geisha; sake and lychee liqueur and the  Puttana; campari, vodka and grapefruit. 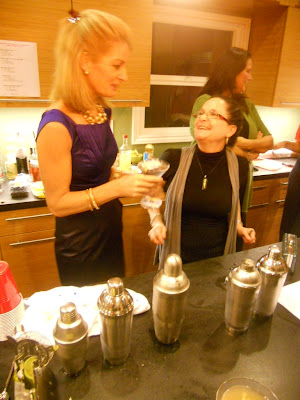 A bit into the night I came across a gaggle.... moggle? of the men having an in-depth discussion about the merits of Taylor Swift vs Carrie Underwood. Swift apparently writes and sings and so is the real artist. "It's like comparing Linda Ronstadt to Joni Mitchell" one of their number suggested, to sagely furrowed bows and nodding heads: "Linda was a great performer but Mitchell did both". Again it never ceases to amaze me how esoteric is the conversation over a few purple, petal-lined drinks.

Wendy's childhood friends had spent a couple of long nights making a myriad of surprise masks of Wendy and Fredi with stories of Christmas parties past on the back, which we all took turn to read out loud. 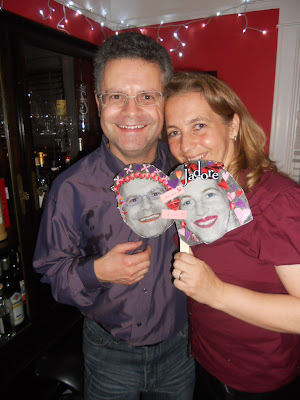 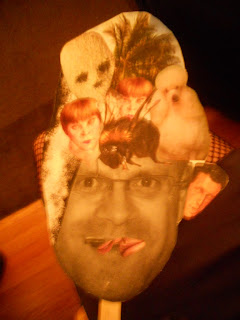 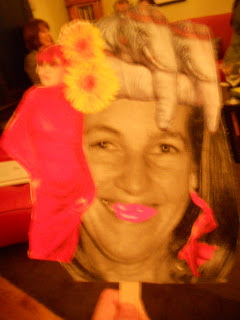 The stories about Fredi were the most hilarious as he is generous, sweet and laid-back - except when it comes to his discount coupons. For Fredi is a tenacious bargain hunter, thoroughly researching prices and snipping and printing out coupons. Wendy jokes that other people's weekends revolve around sports and playdates.  Their weekends revolve around Fredi attending The Wine Mine's Saturday morning wine tasting to ensure he stays well appraised of the top wines for the best price.

One day he sent Wendy and her friend to the store with a coupon for red potatoes. Wendy had not known Fredi to be a enthusiastic advocate of red potatoes but with the coupon they were heavily reduced. They couldn't find the particular red potatoes so could not use the coupons and the friend suggested they just pick up the non-red potatoes that were there. 'OOOh no" said Wendy" You just don't know Fredi".  They arrived home. Fredi said: "Did you get a rain check?" No, said Wendy and her friend. Fredi drove back to the store for a rain check.

Fredi's tenacity is displayed elsewhere. He tasted a cod dish at a Thai restaurant, loved the dish and thought it would be perfect for this Christmas party and asked the owner for the recipe. The restaurateur was reticent to give the whole recipe and only gave some vague indications of a few of the ingredients which  Fredi used to create the EXACT dish...after three days of experimentation.

So now it was the stage where three of the "naughtiest" guests would be selected to recount their mis-deeds. Rebecca was up being quizzed about leaving for a yoga retreat over her husband's birthday. It didn't seem too bad to me, but I was too busy hiding to stand up for her. 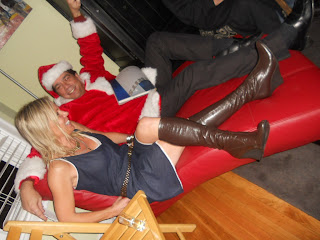 I was pretty sure I would not be one as I am always well-behaved and decorous.

So - Quelle Surprise! or Uberraschung! or Bloody hell! as they say in New Zealand - I was up on couch with Bad Santa for the grilling. What had my husband said about me? All good I'm sure. Said Santa: Are you fun loving and adventurous? Yes, that's me! Maybe a little selfish? Noooo, not me! Did your husband come home one Friday night after you'd had a few cocktails to find you'd booked a flight to New Zealand...that was leaving in three hours? Maybe. Thank goodness he did not mention that I had left my husband to supervise a sleepover birthday party for Tallulah with a gaggle of nine-year old girls. 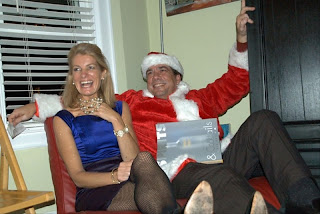 Another allegedly "bad" Santa. The previous night Kevin had met up with the Santa who had been fired from San Francisco's Macy's for making dirty jokes to an older couple. This was after 20 years of service and they were the same jokes he had been making to adults for two decades. There was an outrage and he was featured on The Tonight Show with Jay Leno. This being San Francisco, the famous hotspot Lefty O'Douls  (next door to Macy's) snapped him up to be their in-house Santa where Kevin met him and was pictured for all posterity. 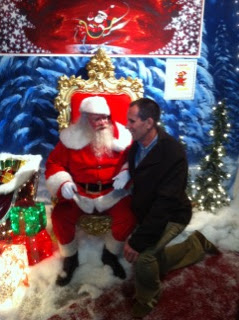 Posted by About Last Weekend at 10:39 AM