I think I'm really close to winning! Yes, I've finally beaten out all the other contestants! I would be excited except it's a First Place that noone else wants. You see I'm the Slackest Mum in the Land...well in my street anyway. 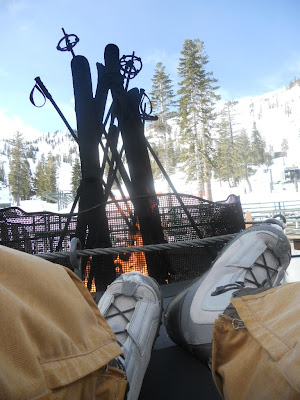 The children affected are Harley, 13 and Cy, seven. Though some will weep for poor Tallulah, nine, and Jackson, 11, too. 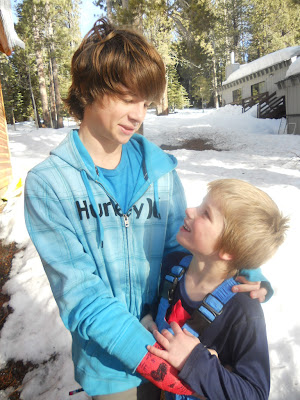 The facts: it took me nearly 19 hours to take Harley to ER for his arm which turned out to be fractured in two places. And I failed to organise a proper seventh birthday party for Cy. There. I've said it. I have spent the last 13 years of my life driving them to sports, movies, parties, playdates and the doctors, but - let's face it - these two incidents will be the ones remembered. Forever legend. In the ledger of life I am now a serious debtor.

It started when Harley called me at 2pm to say he had fallen down some stairs at a friend's house.  They were doing some community work nearby. "I'm okay Mum, I'm fine, it's just my arm and it barely hurts. I'll just sit here for an hour until everyone is ready to go home." I should have been on the alert because Harley never makes a fuss about anything and the stairs were steep.

Arriving home I found Harley contently watching the Warriors on TV. I said out aloud: "Maybe I should take you to ER".  Over the years I have spent many, many leisurely hours in ER reading 2001 editions of AAA magazines. We have frequented these rooms for countless foundless phantom aches and pains and, several times when the kids were babies, simply for ... gas. So when Harley said: "It's fine, it's fine!" I took him at his word.

The same day was Cy's birthday. At first light, his cherubic little face appeared beside me in bed. "Mum" the small, high voice whispered shyly: "It's my birthday today. I'm seven".  Oops, I had forgotten to make a special breakfast. That night I had somehow scheduled a meeting at a friends' house but thank goodness she had ordered Cy a pizza and sugary treats. This had to count - "Cy - are you enjoying your birthday pizza?" asked his concerned mother. And then I took the kids home and went out.

My mother emailed me later, "I didn't see anything in your blog about Cy's birthday?" Oh, I said, remember that bouncing we did a couple of weeks ago? Followed by a couple of donuts? That was... it." Cy invited a couple of friends to the bouncing, but I allowed his siblings to invite a friend too, so in the tomes of our family history that will not be counted as a proper birthday.

I tried to make it up to them this weekend in Tahoe. Harley couldn't ski so stayed back at our rented cabin in Tahoe Donner . To while away the day I taught him to wash the pots by hand and drew him a map to the grocery store so he could fetch a frozen pizza. What a brilliant Mum! 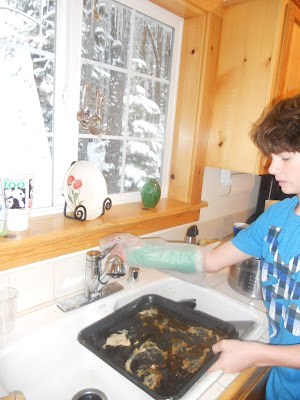 Eventually though, Harley was itching to get out and suggested a few runs on the gentler slopes at Alpine Meadows. The boy in the photo below has the same jacket as Harley, but couldn't be him as that would make me a very bad mother indeed. 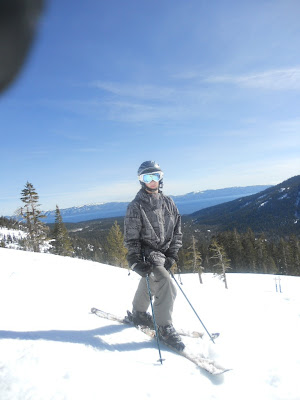 The doctor specifically said Harley was not to play basketball, so this could not be him on the left playing Nerf  in the garage of our ski cabin. 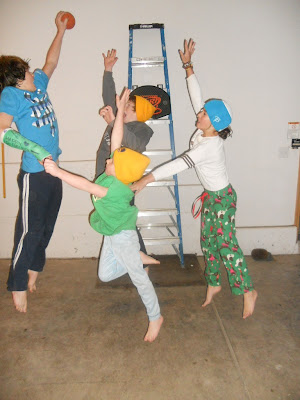 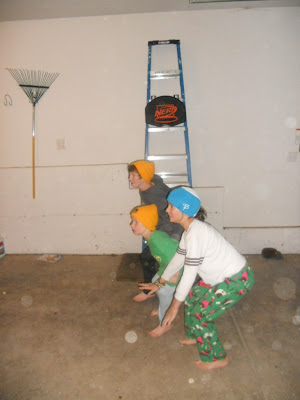 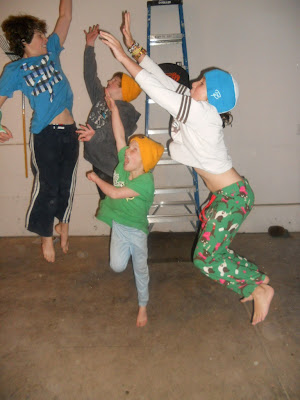 On the way home from Tahoe last night we stopped at In'n'Out Burger.  This place is a veritable Californian obsession and people rave about it. I don't get it - the chips are like cardboard and I dislike the pink gunky sauce on the burgers. But the kids love it and hopefully the burger memories will over-ride my other transgressions.

Today Harley is at home feeling groggy, maybe a touch of  flu? A friend just called and asked hubby and I us around for Valentines' dinner. I know I should probably stay home. But my friend is cooking lamb! And creme brulee! What to do? Hmmm...Let's face it, I'm a front runner for Slacker Mum title, may as well go for the gold...
Posted by About Last Weekend at 2:35 PM