You might be wondering why I am wearing my new ski gear in our kitchen. I'm trying to get some use from it. Yesterday two friends and I were supposed to fly out to a women's clinic at Alta Lodge in Utah, but the plane was cancelled. Ice on the runway there and one plane had already skidded off. It was a sad sight to see three mothers (with a total of 10 children between us) all organised for a kid-free getaway and being turned away...

So today is Groundhog Day and we'll try again, this time we have to take a five hour flight through Seattle instead of the direct hour and a half.

So what did we do noon-time yesterday knowing the kids were all catered for? (Tempted to go and stay overnight in San Fran) It was an odd feeling, not exactly Ferris Bueller. We had lunch at the popular Boot and Shoe , a pizza restaurant in Oakland (an old Boot and Shoe repair shop) which proves that you can reinvent the pizza wheel if arugula, Calabrian peppers and tripe are on top. 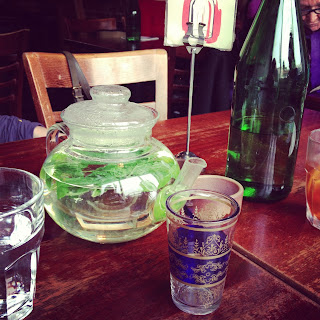 Next a veritable lifetime of an afternoon watching Les Miserables, a melee of chapped lips, scraggy hair and wading through sewers....about Hugh Jackman who spent years enslaved after stealing some bread. I noted that the three main stars  - Jackman (a dreadful singer) Russell Crowe and Amanda Seyfried - were Australians, some of whom in the 1800's were banished Downunder for stealing just a bite of bread in their native England. I know, a strange thought as you chew your chocolate raisins.

By the way, below were the other choices for new ski clothes. (After ten years of wear mine had fallen apart. Though actually Alta in Utah is host to many skiers who have duct taped jackets). It's hard to find the right look, not too Mumsy, not too obvious, not too young.

(By the way, by the way: there was an optional fur collar with the blue coat - would you ever wear fur? Apparently it was "humanely" done like buying leather the saleswoman said -  not sure what that meant??) Excuse the scary no-make-up and desperate smile... I look ready for a role in Les Mis.


Back home and I was greeted with the sight of Harley and Cy who had clipped these plastic handcuffs onto their limbs and were trapped. (Apparently police use them when they run out of handcuffs) "Get the scissors" said Harley: "I thought I could get out of these but, no."


I'm sure they've done something like this before. Groundhog Day Meet Les Miserables.

Posted by About Last Weekend at 10:28 AM