Every two weeks I review three wines under $10 for the East Bay Express. This week I decided to taste three medium sweet wines (Rieslings) from Germany.

I called some of my friends to come join me. No one turned up. Clearly, sweet wines have a poor reputation...but is it earned?

Press here for the full review in the East Bay Express. 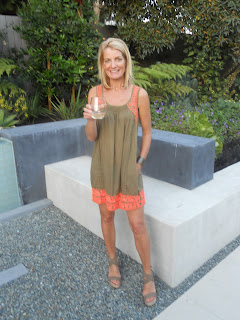 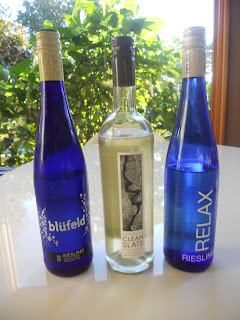 Rieslings: Sweet Wunderbar-ish Wines
But should we say Ja! to them?
By Jody Brettkelly

I sent an e-mail to all my friends: "Come join me! Tonight we're tasting sweet wines." There was silence on the other end. Sweet wines do that to people. They think Liebfraumilch, Sixties without the swing, the sickly stuff your mother used to drink. I'd chosen Rieslings, which are medium-sweet, but still, I was on my own.

It was a boiling hot fall evening and I was drinking by myself in the near-dark. Is there a sadder sight? I had bought the wines earlier that day from BevMo in Oakland's Jack London Square. All three were screw caps, which is just right for cheaper wines, as they're easier to take to the outdoors.

They were also all of German origin, the undisputed master of sweet. In fact, each came from Mosel, a stunning region of winding rivers and blue slate. Two of the bottles came in cobalt blue, which some might consider too casual for serious wines, but the color marks these bottles as more fun and accessible.

First up, in a blue bottle with Klimt-like roses, was Blufeld 2009 ($9.99). It smelled of peaches and had a light apple taste with only a slice of sweetness: perfect on its own or with spicy Thai Yom Yum Goong soup, which I happened to be eating.

The second was Clean Slate 2008 ($8.99), which had a lemony aroma and a taste of apples with more complexity than Blufeld, plus a lemon finish. Third came Schmitt Sohne Relax ($7.99). Even on first sip, it completely surpassed the other two. The wine had a complexity and fullness the others lacked and was much redolent of flowers and fruit. Its slight acidity was balanced by a sweet, lingering finish.


After sitting out for half an hour, all three wines became much tastier. Straight from the fridge, they were thin and had little aroma. We tend to serve our white wines too cold — better to pull them out of the fridge well before serving. (This does not apply to anything sparkling, which needs to be as cold as possible.) My wines were even fuller the next day.

The web site for Relax, LittleGerman.com, is enormously bent on an Oktoberfest frenzy of fun and silliness, which is a bit disarming. The brand is embodied by a "little German" dressed in lederhosen who will teach you "zee chicken dance" and generally how to "Get your Ja-Jas." I don't know what to make of this, and it doesn't quite match the "Relax" name, but I probably won't be buying one of the "diva" T-shirts bearing the slogan "Say Ja to Wine" in genuine Swarovski crystals. But then, the site's quiz has already pronounced me "Not even remotely German."

In the end, it was not such a bad evening all by myself, and next time I'm going to serve Relax to my friends. Maybe after a few glasses, they'll join me in a round of the chicken dance. I wonder how many replies I'll get to that invite. Prost!

Posted by About Last Weekend at 9:23 PM