Are you still celebrating the San Francisco Giant's World Series win? Still? Me too.

My Wineau (wines under $10) column below in the East Bay Express reviews three Glory Days wines.  And press here for the Youtube video of the actual tasting. 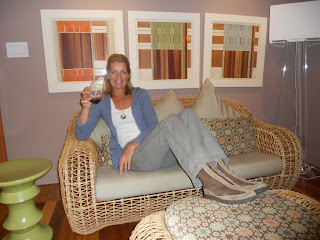 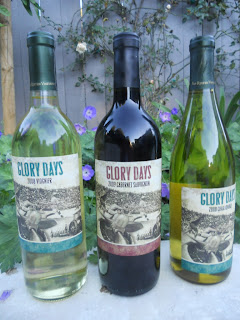 
For those of us still celebrating the Giants' World Series win — and, let's face it, the toasting could go on for some time — I wanted to find some wines ripe for reliving those great moments.

I was having a bit of a Mayberry day when I came across three Glory Days wines at the peaceful little market Mulberry's in leafy Piedmont (335 Highland Ave.). All of the labels feature nostalgic old black-and-white photos of baseball games, planes, and tractors, making that appealing link to times that we'd like to believe were more simple and idyllic, but probably weren't.

The Van Ruiten family has been making wines in Lodi, California, for more than fifty years, but has been producing its own wine only since 2000. One year after launching its own label, the three-generation family set up a large tasting room in Lodi, which is midway between the Sierra foothills and the Delta. Since then, the business has been moving toward more eco-friendly practices such as building nesting boxes for owls, which keep down the rodent population without the need for poisons in the soil.

It was just me and my cameraman-slash-husband Kevin for the tasting. Kevin's mastery of baseball clichés was bound to be handy, as I am very much a fair-weather baseball fan, with "good eye good eye" being my best offering.

First was the 2008 Viognier ($8.99), which tasted of apples with a certain sharp aftertaste. "It's very good," Kevin said. "Not as rich as a more expensive Viognier, but it gets on you faster than expected and has some good movement."

The 2008 Cabernet Sauvignon ($8.99) smelled and tasted chocolatey, warm, and rich, with blackcurrants. It was very drinkable and quite an opulent wine for the price. "It's like a batter with a smooth swing, not necessarily a home-run hitter, but one you can count on to make solid contact," Kevin noted. Like most decent Cabs, it seemed custom-made for the backyard grill, even though we keep seeing rain with the shine.

The 2008 Chardonnay ($8.99) was strangely tangy, with little aftertaste. It was neither buttery nor fruit-forward, leading Kevin to announce: "You're ready for contact with the ball, but then it gets popped up." I also have to add that after enjoying twist tops in past weeks, the corks on Glory Days felt more like an impediment than an old-fashioned touch.Playing coach, Kevin summed it up: "If I were putting these wines in a batting order, I would lead off with the Cab, then the Viognier, and pinch hit for the Chardonnay." For those of us without his command of baseball banter, the first two of these wines are good for reliving our own glory days, for a couple of hours at least.

And with opening day only five months away, there are more good memories ahead to toast.
Posted by About Last Weekend at 8:41 AM