Love, Loss and What I Wore

My lovely friend Amber is writing a book about her dating experiences over the past few years.  Six months ago she was reeling from an excruciating end to her engagement and somehow picked herself up and put herself out there again.  You'll laugh, you'll cry and laugh again because some of her dates are hands down huge prats. 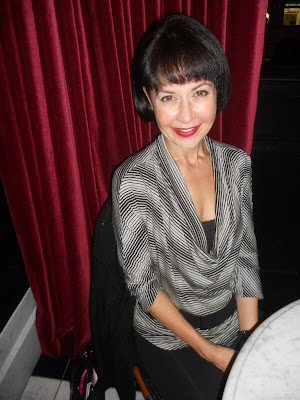 We met on Friday at the new and already well reviewed Cafe des Amis a French brasserie in Cow Hollow, San Francisco, which is about the closest you'll get to France without leaving the Bay Area. Black laquer accents, marble tables, sparkly chandaliers, a zinc bar from Paris and bartenders in boxy white jackets all lend a glamorous but comfortable refuge on a stormy night and if you can't have a wonderful time here you won't find it anywhere.

I would tell you about my seabass and Amber's chicken but I was so engrossed in Ambers tales of dating that I forgot to take notes. She is putting all her experiences together and next stop is finding a publisher. Her hairdresser and long-time friend Yuen joined us and he had just cut Amber's hair into this Clara Bow style. So gamine, so Clara and yet so Audrey, so French - I would love to wear short dark bangs ("fringe" we call it in New Zealand) and look as delightful as Amber.

Plus I have to ask - is there a term for hairdresser-friend? (Besides "Fabulous"?) There should be and I welcome your suggestions.

As I said it was a blustery night so I  wore my teal cosy dress, old Lulu Guinness bag and old silver Payless boots. Here I am - shamefully with wet hair - with Yuen, who was a former fashion photographer in Milan for ten years. Now he is living in Marin with his wife (a former model) and their two children, but back then he photographed all the "supes". Yuen promises to teach me and my friends how to pose for snaps and look the best we can. Not being vain, but me for it would save a lot of time and anguish over exposed wattles, bingo wings, bat flaps and other animal parts that should be on the Thanksgiving table rather than surfacing in photos of moi. 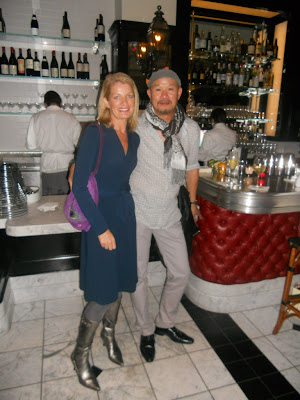 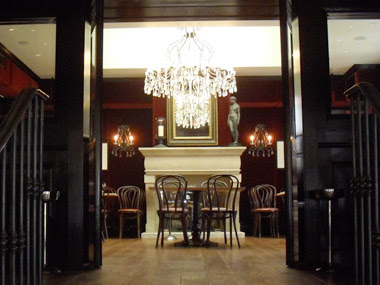 Until we meet again for our "look good in pics everytime" session Yuen tells us to study the photos where we look good and sort out our best pose: "Models look great from every angle" he says; "The rest of us don't. You have to pose the same for every picture. You can't just hope for the best." More on that next time.

Yuen had to head off to a 40th birthday so Amber and I talked about her book chapters over pinot and dinner. Just three months after her engagement broke up, Amber went back to collect her mail and found her ex-fiance had just bought a $86,000 Tiffany's engagement ring, a diamond tennis bracelet and Tiffany's watch - all for someone else. A few depressing internet dates followed, included one drab guy who insisted when they split the bill that she pay more for her coffee as she ordered a double latte and he had a single latte. Another date insisted on abstemiousness - and not just from coffee - for three months then said he didn't find her attractive. More positive scenarios ensued with other suitors including one she met on a flight to South Africa, but cannot be recounted in this blog.

Amber is dotty about her two dogs and she does a lot of work for animal shelters in Los Gatos where she lives.  I suspect she'll meet someone divine through her dogs, but I'll keep you updated.

Posted by About Last Weekend at 9:54 AM