This year the theme of our school's big fundraising dinner was Peace, Love and Green. There is nothing more fabulous than getting dressed up in Seventies' long flowy hair, purple specs and white boots. But being a bit contrarian, Kevin and I decided to go as Green Day, the post punk band. 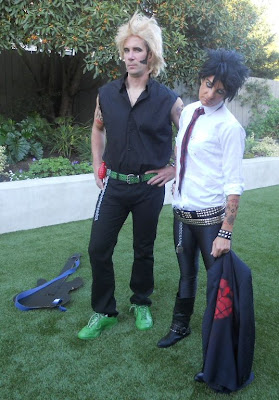 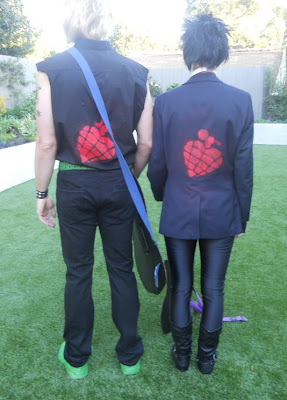 Green Day has been popular in this area for 23 years but went worldwide huge in the past few years, most famously with American Idiot. And incidentally they live just down the road from us. Before he moved house this year, I used to pass Billie Joe on the road most days, he walking around the neighbourhood listening to his music, me striding down to my hip hop dance class, and I entertained not a few illusions that somehow our tiny, almost imperceptible, daily nods of recognition - that constant  - could have been formative in the band's leap from cult to mega-world-famous status. Just saying, could have... 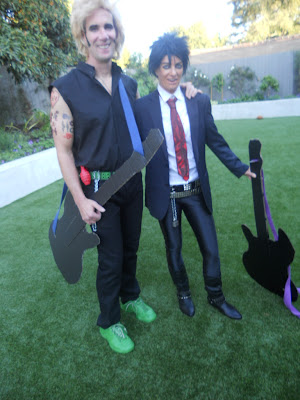 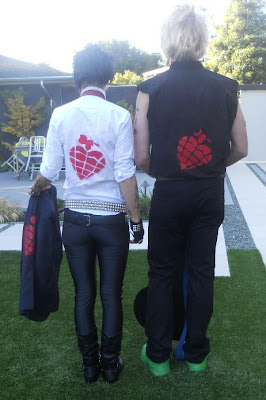 Oddly enough we couldn't find anyone else to wig-up and be Tres Cool, so Kevin and I were a Tres-less duo, he the rockabilly big-sideburned Mike Dirnt and me Billie Joe Armstrong. Obviously it was another eyeliner moment and a visit to Claire's Accessories for some fake tatts. That morning found Kevin locked in his office furiously cutting up cardboard for our two guitars with maybe some cussing. We spray painted in the back yard until all the plants (and children) were screaming for mercy. All this stuff was sprayed: the guitars black, my tie Billie-Joe signature-red, red heart-shaped grenades on shirts and jackets and Kevin's shoes and belt green. 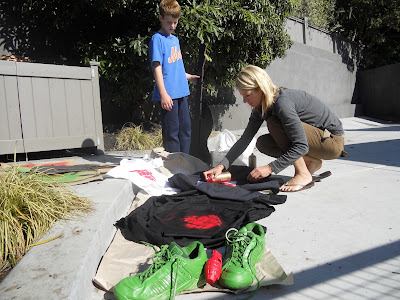 I'm certain if the Green Day guys had popped their heads over the fence they would have been utterly chuffed (delighted) to see us two middle-aged dorks with cardboard guitars  - complete with yoga straps - trying to look like them. The new hole in the o-zone layer not so much. It was proving tricky to get the right mix of their post punk meets old school studenty whatsit style and I wasn't sure Billie Joe would wear the shiny pants from American Apparel or black studded boots from Claire's Accessories...but he could have...

Mum and Dad, still visiting from New Zealand and Cy, six, were completely stunned by all the spraying and tatting until Mum joined in, cropping Kevin's blonde wig and styling mine. Jackson, 11, innocently walked into our backstage and was recruited to do all the wetting and administering the tattoos. 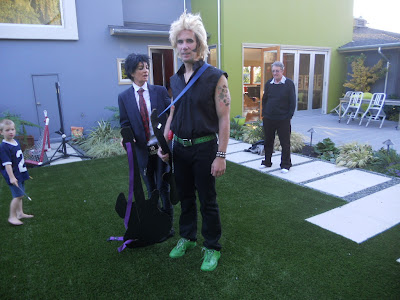 After Mum and I had spent some time torturing my wig to sit down and stick out a la Billie Joe, Dad ventured: "Hmm, I see, it's a  bit like Liza Minnelli". Mum, taking photos, joined in on the short brunette thing: "No, don't smile, you've got to do the Posh Spice grumpy pout."

All was sorted by the time we got to Lesley's pre-party party, where her kitchen played the perfect host with groovy orange and brown wallpaper on one side and watermelon walls on the other side.  And outside, their yellow convertible and 1971 VW van was the ultimate backdrop to the early Seventies vibe. Pre party! Again with the American phrases! We've already laughed about the ones I love, like "Let's have a cocktail!" and "May I freshen your drink?" which must have been invented in the Seventies. "Pre-party". It's perfect, the chance to have a wee drink before you drink and it's okay and actually be rude not to - because it has a proper name. 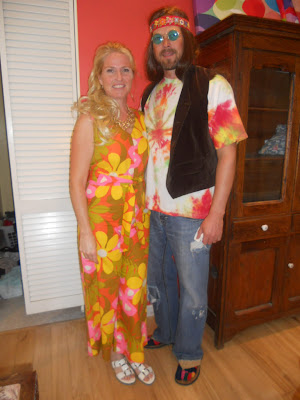 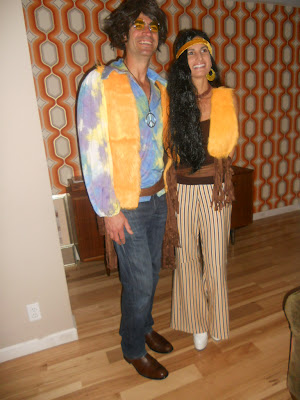 Above top Lesley wore a vintage floral pantsuit from the Alameda Market, Laura below left is wearing Lesley's mother's Sixties romper suit in pink and green hearts (cute!) with heart buttons, very like the new MiuMiu shorts. Sally (pink headband) wore one of her triathlon outfits. 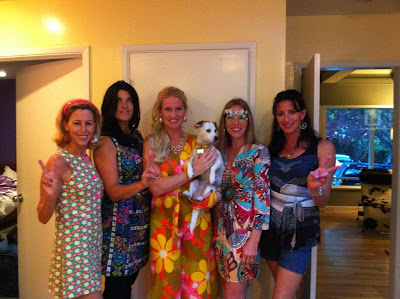 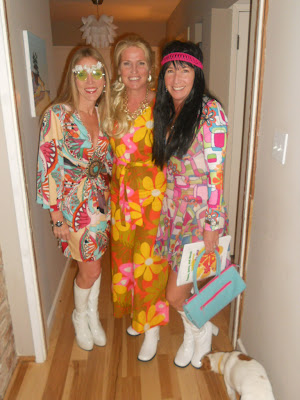 I then had little costume crisis when I saw all the fun hair swishing and boot stomping (and that was just the men) but I held my Posh Spice grimace. "Liza!" said one of my friends "Just like Liza!" A sweaty Liza as I had to keep my long jacket on. (Shiny black pants are NOT flattering to a 48 year old). 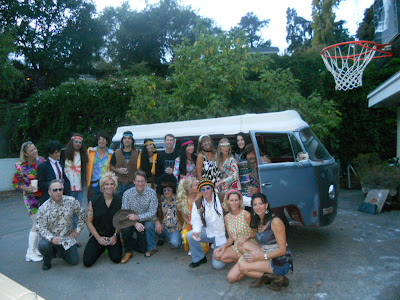 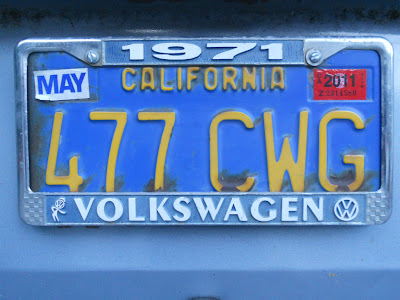 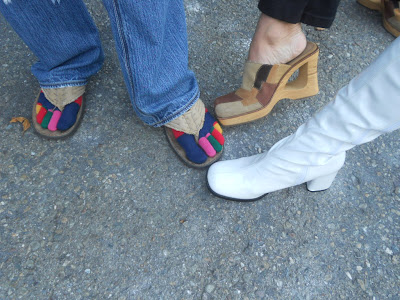 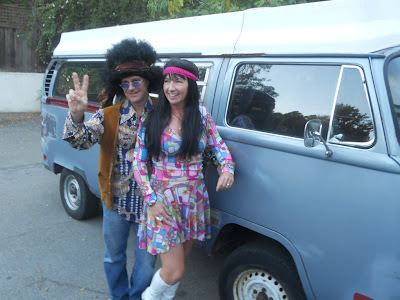 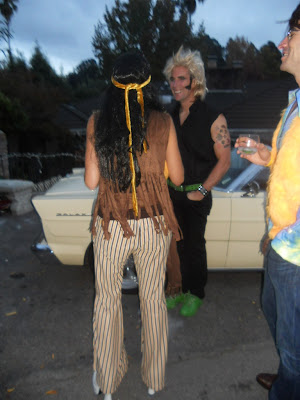 Then it was off to the Claremont Hotel for the actual Benefit where the doorman called: 'Pat! Pat Benatar!" This was just the beginning. By the end of the night we were wee bit worn out explaining who we were.
Most exclaimed: "Great! Oh you're punks!"  Then some quite kindly and with concern:"Are you the right era?"
We would explain: "The theme is 'Peace, Love and Green' - we're Green Day".
Oooh, Clever! most replied. And one suggestion: "You forgot to paint the arm holding the hand grenade. Then we would have known".

First we meet our principal Beverly who was surprised and delighted that Kevin had "tattooed" the name "Bev" on his upper arm. 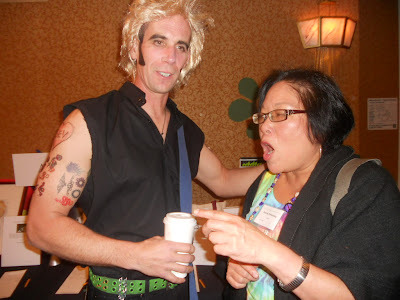 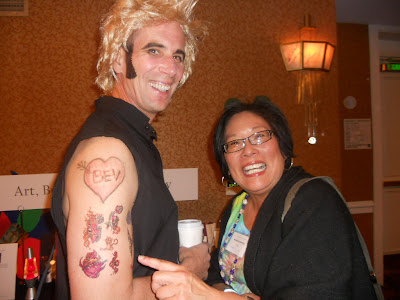 All four of our kids go to the local Kindergarten-8th Grade Oakland public school, which is a wonderful school because of  great parents and teachers and despite lack of funds for things that many would consider basic. Our fundraising pays for, among other things; classroom aides, music, reading, art, language, science, some building maintenance and support of another neighbourhood school. The extent of our fundraising is a revelation to some of my friends in New Zealand where tax dollars actually pay for a decent education and even in some places in Britain and the East Coast. Just last year this one night - the school Benefit - raised $303,000 gross. Most of my friends outside this area find it astounding that parents of a tiny (320 kids) Oakland public school can raise this much in just one night. But we have to! Parents host trips and parties and local merchants donate goods and services and we all bid as high as we can. (Last year we donated the New Zealand dinner and the Mad Men party.)

There was Yoko Ono, The Green Goddess who has created all her own headgear and who won Best Costume prize, solar and wind power guy, sundry Men About Town and Coca Cola pantsgirl, aka Nancy. 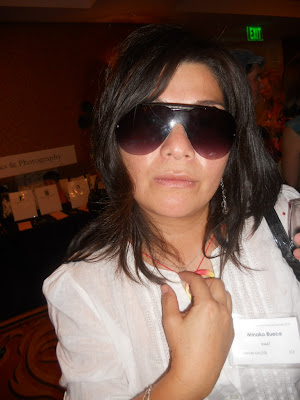 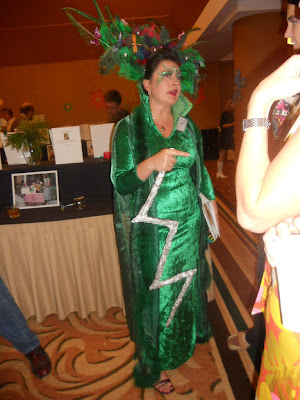 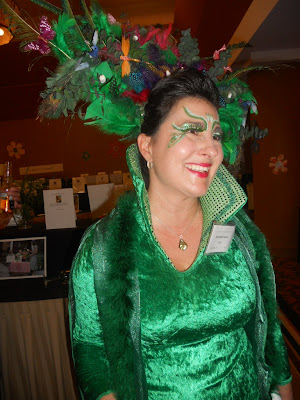 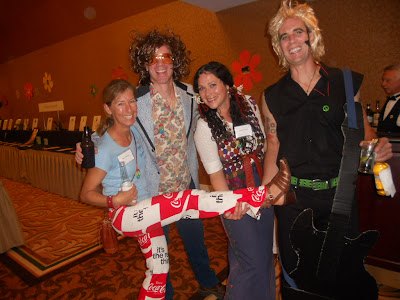 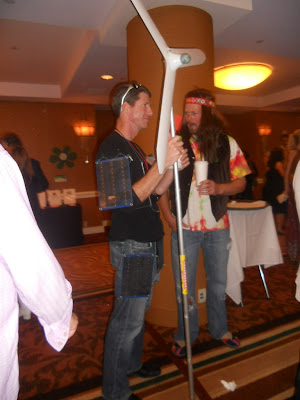 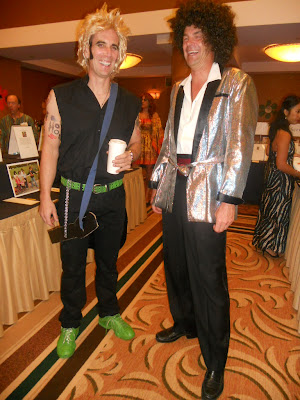 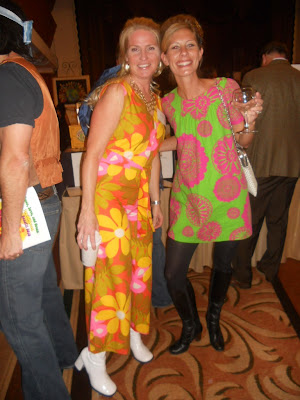 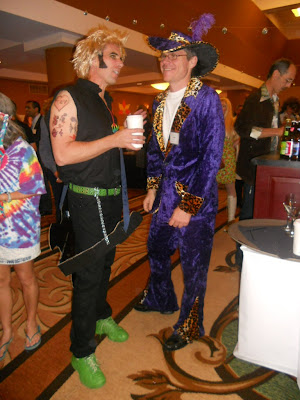 At the end of the night, we met The Sandy and her husband Kevin at the bar who kindly offered to drive us home. And so it was that middle-aged "Billie Joe" and "Mike" stood at the exit waiting for their car, tattoos ripped and faded, make-up smudged.  No, not crushed by fans and adulation, but clutching crumpled cardboard guitars and one sad, torn Green Day bag filled with ratty hair-sprayed wigs. More "Wake Me Up When September Ends" than "21 Guns"...Suddenly the night came alive as one of the doormen sprinted up to me with a delighted cry of recognition: "Pat Benatar! Ha! I used to love her!" 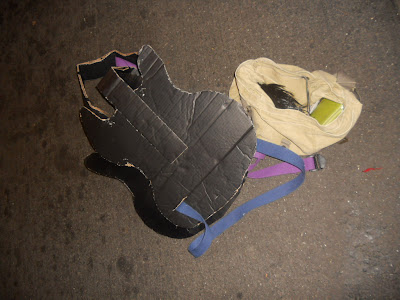 Posted by About Last Weekend at 5:55 PM