When Marne sold Mike a sofa little did they know it would lead to them to quit their jobs, set off cross-country in an Airstream, start a vintage furniture store in Healdsburg and plant a 10,000 square ft garden in nearby Cloverdale. And re-work many, many other sofas. 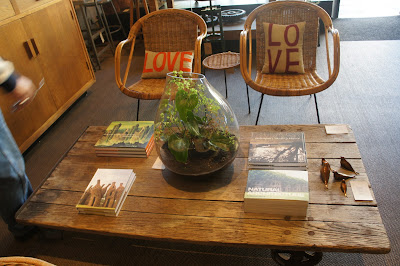 This was seven years ago when both Mike, now 47, and Marne, now 44, both lived in Orange County. At the time Mike was an advertising executive in charge of the nationwide Mazda campaign and Marne was head of floor layouts for Room and Board.  (Before that she owned Orange, one of the first stores in the US to stock Moooi and her brightly coloured Pop furniture.) She bumped into him and convinced him to buy a sofa. "We still have that sofa," says Mike.

I met them both at their three-year-old store in Healdsburg called 14 Feet - containing always surprising bits of the industrial, quirkily artistic and re-finished vintage. So hip it might feel intimidating owned by sniffier design-bods, but in their warm and unpretentious presence you feel more than free to stroke, smile or sigh with want. 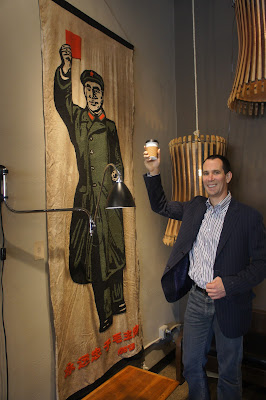 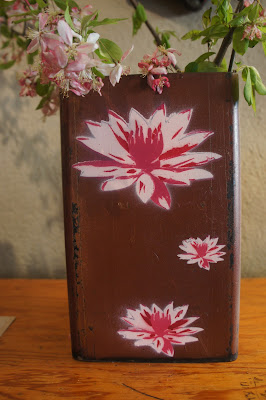 There are vintage re-finished pieces -  Marne does the metalwork, Mike does the woodwork - including the NBA-player huge 100lb sheet of mirror in a 8ft steel frame, Bank Of America 1960's walnut clock and huge scaffolding hooks from the 1880's.  Then there are the edgy, smiley and always artistic accoutrement including wooly sheep from Germany and old lady china plates enscribed by a New Zealand artist with naughty or provocative words. "Trollops" being one of the most printable. 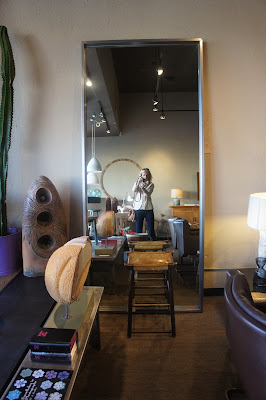 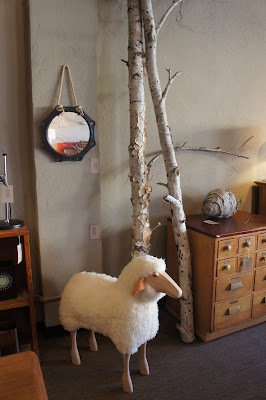 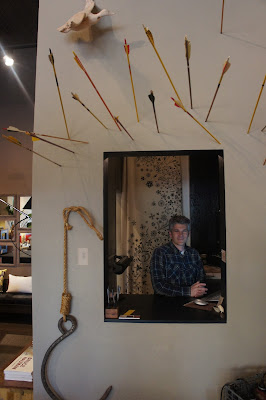 Ready for a change of pace from the 14 lane LA freeway, they quit their jobs and set off across the country in an Airstream to find a town to settle in. Along the way they bought some wonderful rough treasures in flea markets, salvage yards and estate sales, the best place being Neds in New Bedford Mass. They told each person: "We'll come back to get it." And after buying several 14 ft pieces they got slap-happy and just called all the big bits 14feet and hence the name of the store. 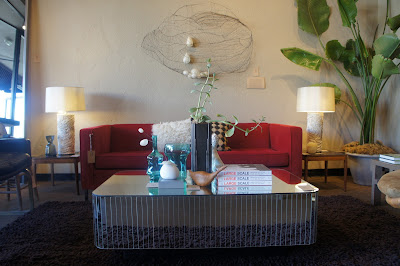 Mike: "I'm really really proud when we can keep something out of the landfill....The quality of the vintage pieces are exceptional even before all the time and money we spend on them -  they are still better made." This is seen in one of his latest projects, a two-sided partner oak desk refinished in espresso with leather surfaces.

Marne says : "I love to find pieces with great bones in a state of disrepair and restore them. " Even as a six-year-old she was forever moving around furniture. One of seven kids on a 180 cow dairy farm near Boston, the entire family worked hard. Her parents also restored old homes in their spare time. "We were like servants in the summers, tiling, sheet-rocking, shingling, we never went away as a family. I hated it but I'm glad now I learned to do it....I supposed I've come full circle" 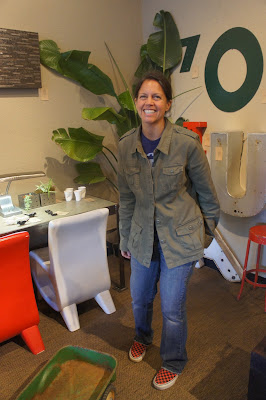 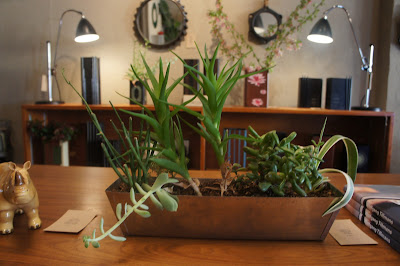 Like many, I'd fantasized that this kind of store-keeping was romantic. I called Marne while she was at home on her day "off" doing the summer planting. "We work really long hours and all the lifting is very physically demanding, but I'm doing exactly what I want to be doing. Frankly we make almost no money because we put everything back into the business but it allows me to live the life I want to live."

Part of that is she is fulfilling her ambition to "be a better steward of the earth." After selling her store Orange, Marne worked in Hawaii promoting movie blockbusters such as Superman and the juxtaposition of that frenetic planning with hours of meditation lead to an epiphany. She didn't want a life of isolation in Hawaii and she needed to escape the movie industry with all its "waste and swags and junk."


Mike says similarly: "It's insanely long hours, more work than the corporate world. But you have the ability to shape your life any way you seen feel fit. And I really enjoy working with my hands."

They work well together. Marne says: "I'm more of a risk taker and esoteric, he's more nuts and bolts and technical, he is an anchor for me."


Mike is sometimes sceptical about her buying impulses including hornets nests from their Airstream journey and "Tramp Art", old beer cans plucked from dumpsters in the 1940's and 50's but both have been best sellers.

1. Mix styles:  one modern sofa with a fabulous William and Mary chair or a Moroccan pouf.
2. Mix textures: if you need to have a microfiber sofa use nubby cushions or a shaggy rug
3. Mix in shiny: glass and mirrors
4. Mix colour: though Marne has become less dramatic. "Rather than three walls of orange I'll do a beautiful red sofa against a chocolate wall."
5. Even if someone tells you it doesn't go - stick with your instinct. Your first reaction to things is usually right.


What snap decision did you make recently that is just so right? We bought their vases made from old pipes.

Posted by About Last Weekend at 11:00 PM