This weekend hubby Kevin and I took off for Healdsburg, a charming little village two hours away in the wine country. Cy, seven, calls it "WineTown". It was my birthday yesterday and I turned a glorious 49. As my husband gleefully pointed out, I'm now in my 50th year. Kevin bought me a Metal Earth necklace made by my friend Rebecca. 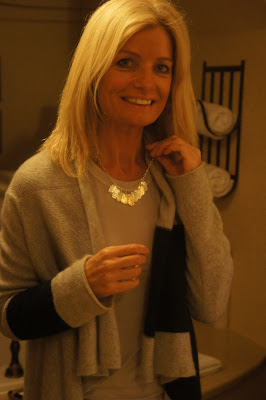 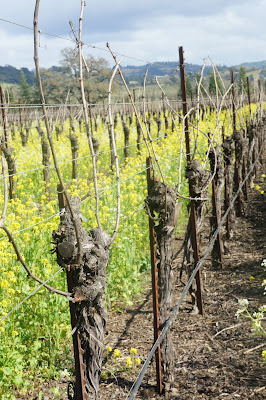 It may interest you to know that until eight years ago my husband was not fully appraised of the fact that I was - and still am - five years older than him. If we hadn't met up with an immigration lawyer in London, Kevin would have remained blissfully unaware of this fact. At that stage we had three children.

It wasn't that I ever lied exactly, just that I didn't correct him when it became evident that he thought I was much younger than I was.

Being a contrarian I trained for seven years to be a barrister, then switched careers to journalism, so I found myself toiling away for no money (literally, this was the last recession, no jobs) at a local radio station while all my friends took off to Europe for their  "OE" . That's Overseas Experience, the Kiwi tradition of enlightening oneself for at least two years whilst travelling in a combi van round Europe. This entails being a bloody idiot with other bloody idiots Running With The Bulls in Pamplona, steeping oneself in the history of Bavarian castles and Michelangelo's church ceiling and of course unravelling the recondite mysteries of Oktoberfest beer songs.

That meant I arrived in London much later. It meant I was a 30-year-old chalet "girl" in Champery, Switzerland (an optional, but I feel, vital part of "OE") where most everyone else was 19 years old.  They affectionately called me "Grandma." I met Kevin when I was nearly 33 and we had baby Harley when I was 35.

It wasn't that I was deliberately secretive or even "economical with the truth" or even that Kevin was excessively obtuse -  more that I was evasive. He never saw my passport clearly though we flew all over the world in our first three years together, including to Peru when I was four months pregnant with Harley.  Somehow our exact ages never came up. 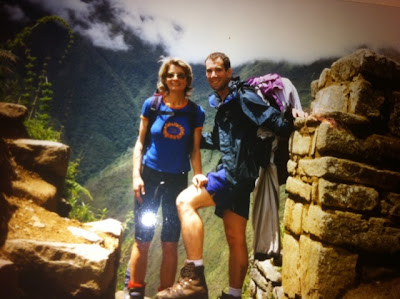 After three kids we decided to move from London to the US and when we met with an immigration lawyer she advised us that we had to get married in order to live in the US.  Then she exclaimed rapturously - looking at my birth certificate - "Hey, Jody! Celebrations are in order!!!Happy Birthday for this Sunday -  THE BIG 40!"

Our lawyer realised what she had done: "I'm. So. Sorry!!!! " she mouthed to me, her eyes terrified.

The game was up. Kevin looked at my birth certificate, his jaw dropping. Not exactly the received euphoria presented by the AshtonKutcher-DemiMoore PR machine. "Horrified" would have more accurately described his face.

We were now free to spend the rest of our lives - me with five years less than first thought - in utterly honest abandonment.

Now I will talk about my age to anyone who cares to listen.  I'm already planning my 50th and looking forward to it. It's not that I'm wiser - am still a confirmed "nonga" (Kiwi-kid word for idiot). I'm not more comfortable "in my own skin" when that skin involves present and imminent slippage including elephant knees, crow feet, bingo wings and turkey wattle. There's no philosophy I've encountered that's suddenly makes all those wobblier bits a subject for joy.

And though Cy will point out scary neck stuff, generally the kids have been coached by Kevin to be gentle:  Cy put on his tuxedo and wrote on my "birdar set" (birthday seat): "Mom you get printy avrer secint" (Mum, you get prettier every second). Tallulah wrote me a song:
"Paying the taxes in the hot warm sun,
Looking forward to having some fun.
Eyes as blue as sea, I know she's my mum when she hangs out with me" 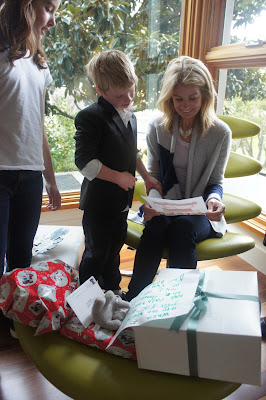 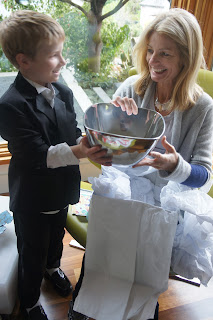 In the end I found solace in wise words from my friend Sue. "Listen Jodes" said Sue after hearing me whine yet again "Age! There's not a damn thing you can do about it!"

Can you reveal something you've kept from your partner (within reason)?
Posted by About Last Weekend at 9:32 PM