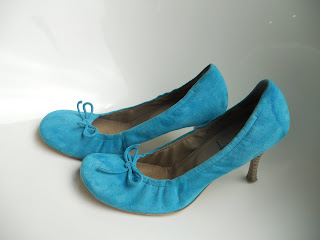 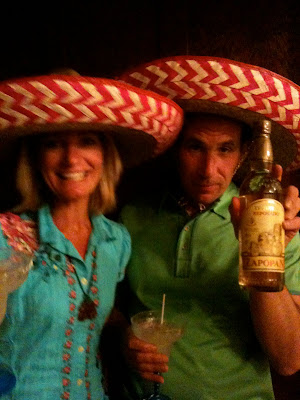 We won this bottle of tequila because we were the first people at this margarita party just round the corner on Margarido (Oakland). Which just goes to show- it is the early bird that gets the worm.

Talking of early and not to sounds like a bossy bag, but I would just like to string out this "teachable moment". Through having four kids in eight years, we have always got a Sat night babysitter to come at 5pm. That way you avoid those magical "bed bath and beyond" moments - the babysitter gets the benefit of all that. I don't have much (well, any) good parenting advice in this blog, so this is your best "takeaway". Okay, now have used "teachable" and "takeaway" in one paragraph and you're still with me, you'll never leave me.

Back to clothes: I bought this turquoise embroidered shirt seven years upon arriving in Oakland from London nearly eight years ago -- and never wore it. Turned 48 years old in March and though the years have not been kind (skin slippage and memory loss) I have learned what suits me. Not detail, not boho chic, not TMM (too much material). Just preppy with a twist. Marc Jacobs, Zac Posen, Louis Verdad, The Gap, Lesley Evers. Is there a look that's just right for you?

Pic above: The turquoise MaryJane fake suede shoes from Anthropologie, I've never worn, but kept, which is usually against my principles.

I'm very suggestable and if advice resonates I follow it somewhat slavishly.

For example: If you haven't worn an article of clothing in a year, you'll never wear it so give it away. Always follow that one.
Another example: A former colleague at the London Evening Standard newspaper, fashion editor Mimi Spencer, once told me that you should never buy something on sale that you wouldn't pay full price for. It really does concentrate the mind. I repeated this to my eldest son, Harley, aged 12, the other day. Harley's withering reply? "Mum, you think so much about shopping... you have rules?"

Shame, because this was one of the wisdoms I was saving to pass down.
Posted by About Last Weekend at 8:38 PM