It was a typical shimmyshine Oakland Sunday and decided to go with Kenny'n'Mike to the (Gay) Pride Festival in San Francisco. Embarrassed to say I have lived in Oakland for seven years and have never gone to this world-renowned event, just 12 mins across the bridge.

We followed the parade and ended up at City Hall, with all kinds of shows and talks and dancing.
But what struck me about the floats on the parade was not how licentious or shocking they were, but how relaxed and...kind of suburban. Is this a good thing? Church groups, libraries, politicians and loads of animal groups all wanted to be involved. So many more of us want to have Pride. 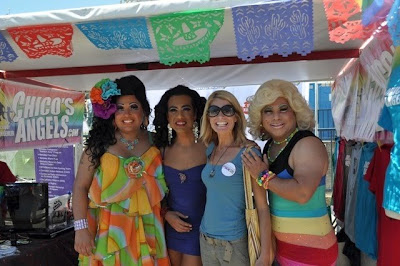 Pic shows me with the Chico's Angels, who have a webseries. I'm no critic but I would venture to say the one where they encounter gangs, girl-fights and ceramic chihuahuas should be an instant classic. In person, they were terribly sweet and so popular I didn't have time to ask them how to best highlight lid-less eyes like mine and I'm sure they would know how.

I had to get back for yoga, so left before the stage shows which I'm very sure were not suburban. And I didn't venture into the Fetish Zone, which, for sake of journalistic integrity I should have viewed. Sorry readers, next year. To be honest, having had three baby boys, I've been peed on many times and it's not that exhilarating.

Back in  Oakland, walking back from the Bart, (Tube to my London friends) I caught up with two of my kids Tallulah, 9, and Cy, 6, cycling around the neighbourhood with hubby Kevin.

Tallulah asked where I had been. Gay Pride, I said. That reminded her: "I won't be voting for Proposition 8". Then, she said...ooh wait, what is Prop 8?
I told her gay people were not allowed to marry.
"No, that can't be right" she said dismissively and pedalled away.
Posted by About Last Weekend at 10:50 AM