Shoes on the streets of LA


During my week in the Pacific Palisades, a discretely but immensely wealthy town between Malibu and Santa Monica, I learn the only shoes you will photograph before lunchtime are sneakers. I don't know who is holding down the fort in Hollywood, but everyone in this hamlet exercises until noontime. Not totally sure what happens after that - still loads of people walking around with yoga mats and sneakers but presumably the movies gets made between sweat and stretch points. Long story short, Sunday afternoon at Farmer's Market made for a more interesting sartorial scene. 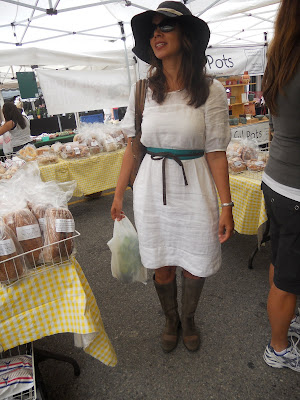 This Pali mama shopping, above, in the Palisades Farmer's Market was seventies Amalfi Coast with her floppy hat and linen dress with strip of leather belt, but very California chilly morning with the addition of her two-toned leather and suede boots. I keep thinking people here are going to be annoyed with my incessant picture-taking, but she was gracious and sweet. 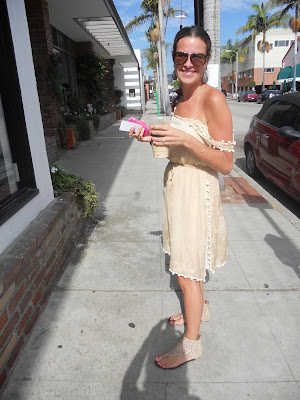 Just down the street,  a store called Elyse Walker offers red carpet outfits (good to know if you need an Oscar frock in a hurry) as well as the casually pricey beach look.  Inside it is very "Chateau chic" chandeliers,  red curtains and sequined skull cushions for "Westside starter wives" as LA Times says. From the outside it appears an unflashy store on an incredibly low-key street, but in fact it's the site of many frantic run and flash scenes. Youtube  has two vids alone of Jennifer Garner shopping with 20 paparazzi noses pressed to the shop window. It's a small schadenfreude glimpse into her life, in case you were contemplating A-lister celeb status. One of the saleswomen opening the shop (above) encapsulates that shiny beach look with her silver filigree shoes and earings and simple sand-coloured sundress.

Yelp has may complaints about the service in this store, citing vapidness and indifference to the non-celeb shopper, but I found the staff okay, even though I was wearing cut-offs and Havianas. While I was mooching around, there were two flurries of staff-fluttering. One around a young woman, who was either someone or daughter of a someone. She was pointing, saying: "What about that... I like that...what colours do you have that in.... I'll take that and what she's got on". This is not surprising in an area where some teenagers get $200 every day during vacation to spend at the mall. (True) Another mature woman wearing a very tight mini was also being fluttered upon. She was viewing other similarly small skirts and sighed with angst: "All I just need a purple bag. Do you have any of those?" 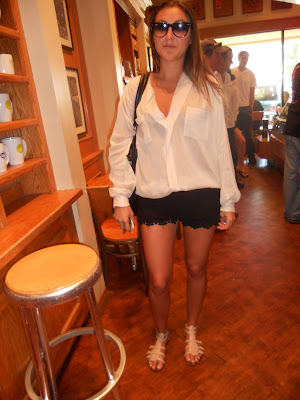 This young woman in The Coffee Bean also works at Elyse Walker but shows you don't need to spend a lot to get that glowy by-the-sea style. Her shoes are from Zara and her pale pink oversize chiffon shirt is from Urban Outfitters as are her black chiffon scalloped shorts.


On the Santa Monica Promenade after 5pm, the proximity to fame and the chance of a few bucks draws acts which are good, bad and indifferent. There is the requisite Micheal Jackson impersonator who said he only posed for tips.  He was more than sniffy when I gave him three dollars. How much should I have paid...surely not $20 which was the alternative. Just maybe Cy's (six) moonwalk was better and Santa Monica Micheal was wearing a prosthetic nose and cheeks so wee bit cheating of him and no need for him to be so sniffy. Looming over Micheal was an ivy dinosaur and behind him some observant Jewish students who were canvassing passers-by to get a Facebook grant for their university. 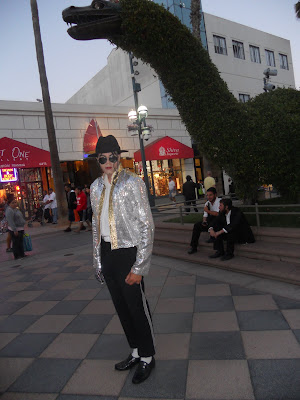 The next act down was an exuberant English band called Buffalo Skinners playing a mash of Bluegrass and Irish country. We all decided they had very English shoes, winkle-pickers in leather. I'm not sure if it was leaping around to all that clattery, battery music or the starving artist element, but they all had such skinny legs. Maybe that should be their signature. Their music was pretty good, but skinny legs are much easier to market here. 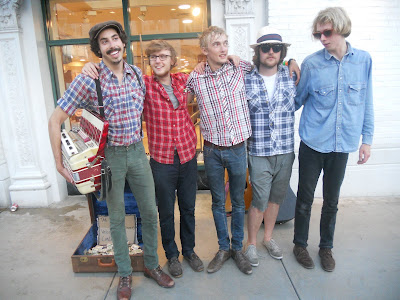 Next door was this chap, who we decided was either a bit bonkers or  quite genius. He had no discernible talents and kept calling: "Yo Yo get down homies in Santa Monica" in a monotone. He then waved around prongs wrapped in aluminim foil that looked like he might be gearing up for some magic tricks or creating electricity, but turned out to be just ... waving around  prongs wrapped in foil. Considering the eclectic nature of his act, the surgical cap paired with  rainbow painted shoes were totally in character. Our verdict? Genius. 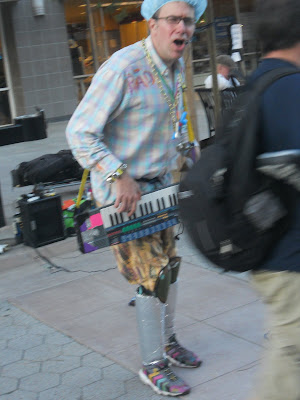 Just to round off the satellite Hollywood crowd was a stream of women walking into Yankee Doodles restaurant carrying red folders. They told us they were "Miller Girls" for the evening. We met them while sitting in the restaurant area, which was everything you would imagine a restaurant called Yankee Doodles would be. It offers 2lb burgers and a veritable bucket of Margarita for $6 and more sports on more TVs than you will ever see in your life. "Should we pose for her...not sure" one of the girls said, but they had a confab and decided it was okay to be in my blog. I'm not sure what the "Miller Girl" duties entailed as I was not allowed past the red cord. Apparently my days of impersonating a Miller girl, red folder or not, are over.  (Or, more likely,  never started.) 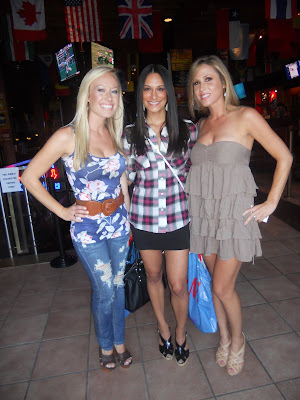 The next day along the Santa Monica pier, this young father was looking for his shoes. Where did he put them last? Hmmm....What sort of work does he do in Santa Monica,  I asked.  He shrugged: I just hang out, he said. Fair enough...seriously, having this original a hairdo is a sufficient career. 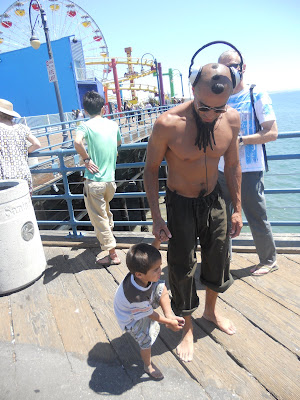 Round the corner is this golden guy who is a gardener in real life but does this on the weekends so he can donate money to a children's charity. Cy posed along with him. 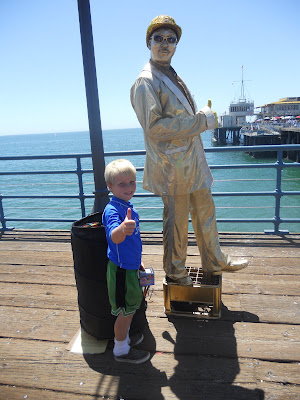 Cy, (sorry) now in the Nike store, a  cornucopia of black velcroed shoes. Fueled by a Pinkberry ice-cream high, Cy starts leaping, posing and dancing with all the mannequins. The floodgates open and a torrent of other tourists start doing the same, leaping all over the show and taking snaps. Amazingly the staff seemed very tolerant of the sudden shenanigans. 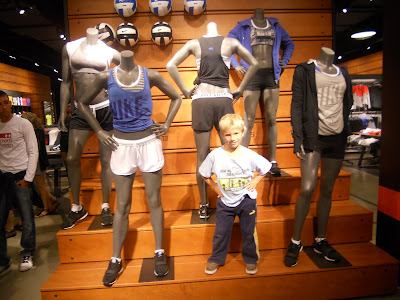 Next day found me driving to Beverly Hills. 20 mins there, two hours back...the mysteries of LA traffic. You just can't go to LA without walking up (or is it down?) Rodeo Drive, one of the most exclusive shoe shopping streets in the world. It's the same deal here in the morning, everyone still exercising so only a dribble of European tourists and Bev Hillbods. Most of the people I  photographed were foreigners, even those who lived right here in the Beverly Hills. In all the stores, Dior, Chanel and Prada, the staff make for a restless sight, standing around,  intermittently primping the racks. One of the Prada staff said the stillness would last until 12.30pm when the streets would suddenly be four people deep. I wasn't allowed to take photos inside the stores, but sneakily took this one in Dior of a Russian local called Rita who was looking at key chains. She is in a black Singledress with patent leather peep-toe black heels showing black can still look summery. Earrings by Avakian, where she works. 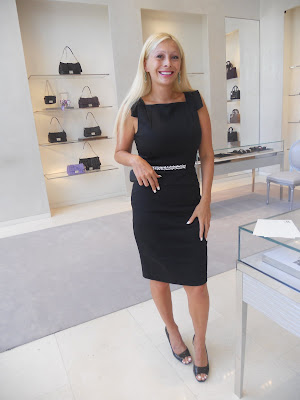 Outside Dior this woman told me she had bought her glorious pinky-red frilly shoes in a downtown alleyway store. I loved how she let her shoes be everything, a red punctuation point. 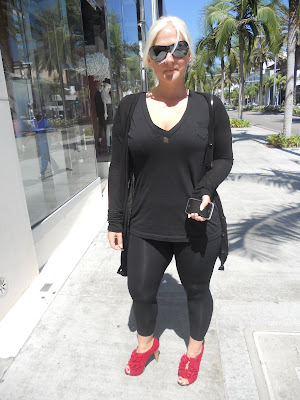 Most shades of pink are incredibly flattering on most women, but so often I hear: "I really don't see myself as a pink person". I've read interviews of designers who have learned the hard way to stay from total pink, it doesn't sell. But many of us will buy something with pink in it. This Eqyptian woman below had just flown in from Vegas, where she had bought her entire outfit, purple-pink tie die dress, bright pink purse and the grounding canvas wedges. 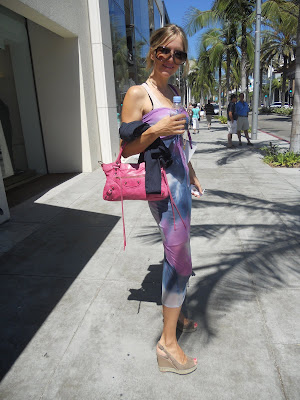 Also looking breezy in a few slices of hot pink was this Swiss woman who lives in the area. I've always loved bright red hair and hot pink. Where did she get her bright pink-red sandals? "Somewhere along here"  she said, waving at the street. 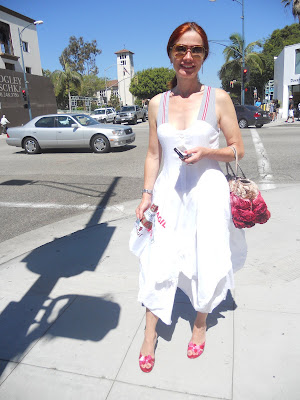 Down the road, a Dutch woman was wearing an even hotter neon pink and still looked laid back and bohemian. 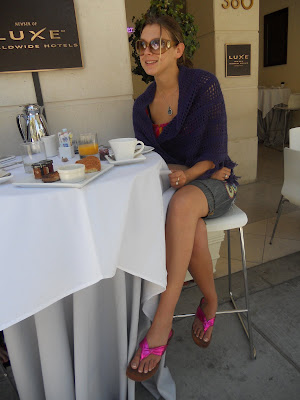 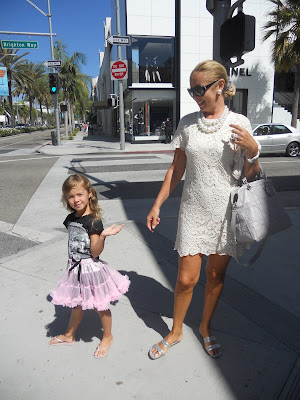 Another French woman in a classic white sheath with tan sandals and husband in Breton stripes. Let's face it - classics that need no improvement. They are standing in front of a yellow convertible Rolls Royce. RR hasn't stuck to the classic, but this I like. If you're going to get a ridiculous car, why not go the whole hog? 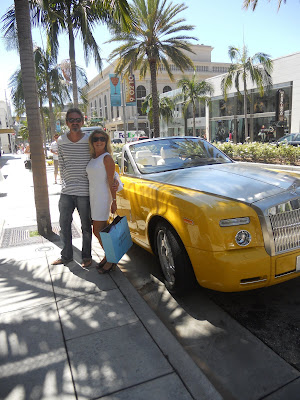 Back to the Pacific Palisades and The Coffee Bean. This hail-fellow-well-met guy was high-fiving everyone in there. He came bouncing in on his big white sneaks and a bright red sweatsuit in 90 degree heat. A kickboxing teacher, he is currently coaching the world champion. Off he bounces again, a testament to the joys of kicking and coffee. Sure it's LA, but not everyone is on a Pinkberry high. 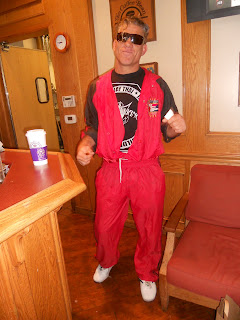 Posted by About Last Weekend at 7:37 PM

Email ThisBlogThis!Share to TwitterShare to FacebookShare to Pinterest
Labels: FashPash, Shoes on the Streets