Today is my second Wineau column for the East Bay Express. Every two weeks I taste three wines under $10. This week it's Rosés. 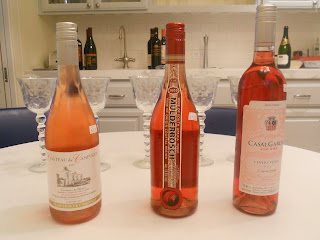 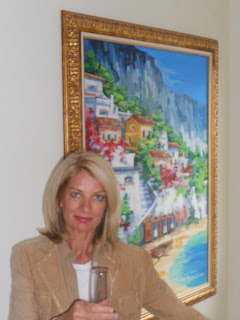 Rosé, Whatever the Weather
Think pink to break through the marine layer.
By Jody Brettkelly

I had been waiting for a bright, sunshiny day to taste the three rosés bought from The Wine Mine in Oakland's Temescal neighborhood. But what is it with this summer? The fog and cold never cease. So we decided to put the wine to the true test: Do these rosés go well with our now-infamous marine layer? To find out, we crossed the bridge with friends Kenny and Mike for a barbecue at my brother's house in San Francisco. The fog there was dense and chilly, worse than Oakland.

All three of these rosés, with their peony pink transparency, are redolent of mid-morning Monaco. Making their casual charm even easier, they are all twist-tops. But will this evening's weather render them more ho-hum than ooh là là?

First of the three was Chateau de Campuget 2009 ($9.50) from France's Costieres de Nimes. It's composed of 70 percent Syrah and 30 percent Grenache and is made by a family in a small Riviera town. Mike found it "salmony" in color, with a taste and smell of strawberries. I could smell something peachy. Kenny joked that he hasn't been able to smell anything since the Eighties. But he did find it to have a clean up-front taste, making it very drinkable. Historically, in Europe, rosés were always a delicate dry wine. After World War II, there was a fashion for sweeter ones, but now the pendulum has swung toward a drier, bigger style. In France, rosés have even exceeded white wines in sales.

The second was the Casal Garcia Vinho Verde from Portugal ($7). Like the rest of us, Mike noticed "bubbles in the background." It felt like an invigorating spritz. My brother Tony said it was "sharper, with a bit of a bite."

"You don't need food with this one, you could sit on the patio and suck it down," said Kenny. "Or sip it!" we chorused, keeping it seemly.

The third was the Mulderbosch Cab Sav Rosé 2009 ($8.50) from the Coastal region of South Africa. For a "new world" wine, this has not a little history. The winery dates back to 1692, and the family who took it over twenty years ago were pressing grapes in Yugoslavia for 300 years. The family is apparently dedicated to preserving the pristine vineyard through holistic farming. Kenny pronounced it "forward fruit" and "a lot more up on the upper roof of the mouth and lips," but without much finish. Its complexity suits it best to summer food, he said. The rest of us collapsed into gales of laughter at his fanciness: We had had our ooh là là moment.

After a barbecue dinner, Kenny returned to the tasting table for one final glass of rosé. I joined him, declaring with that particular kind of wisdom acquired on a wine-tasting evening: "The true test of a rosé is if you want to still drink it at the end of a long, dark, cold night."
Posted by About Last Weekend at 10:16 AM