Yesterday I promised you a post about soccer snacks. And who better to illustrate the whole phenom than my youngest, Cy, who has been hovering around soccer snacks for all of his six short years. 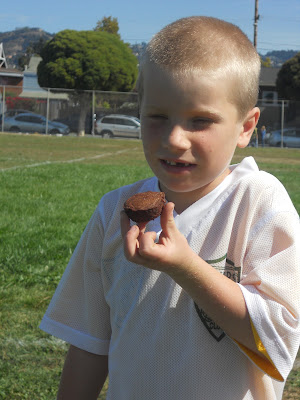 Technically the designated Snack Family doesn't have to provide snacks for siblings. Some do, some don't, and it's the wild, wild west when it comes to the appropriate time for those siblings to take a snack. This grey area in etiquette has forced Cy to hone his snack scooping technique to a fine art. 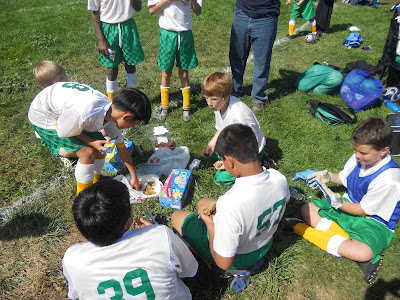 Cy has always wanted to come to the other kids' games. Firstly we thought this must be his love of fresh air, penchant for travel (you get to see every square inch of Oakland) and love of the game...Now after six years of observation we have realised he is after the snack. 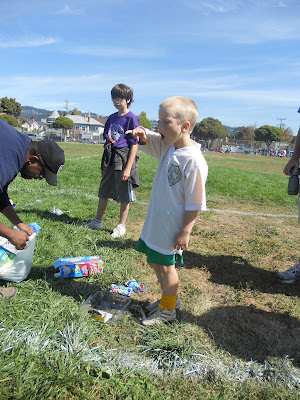 So the game is over, the Snack Family unpacks the goodies. Inside that cooler and those grocery bags,  Cy knows, is his destiny. There will be juices, there will be cut up oranges. Cy, in background of pic below, frustrated by the oranges, waits for the real sugar. There may be "health bars" or - pay dirt - homemade cookies or donut holes. 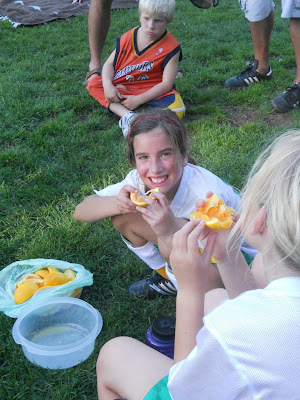 I have witnessed three kinds of snack siblings in the wilderness that is the soccer fields in Oakland. There are those who circle around the pack and make surgical strikes when there is an opening. There are the more timid younger ones who wait until all the team has had their fill and then feed on the carrion of broken bits or leftovers.

Then there are the Cy's of the open plains. His technique, we've realised, is that he is not a sibling. He is one of the team. During the game he stays alert and watchful, hovering near the coach, asking questions, chatting with the players at half-time.

Now it is the close of the game. The team gathers around the coach. Cy listens in too. He does not have to gather round. Because he is right there. He is not sitting behind the players or next to the players. He is standing right beside the coach. Now he is not a sibling, he is not even a player, he has become one of the coaching team. 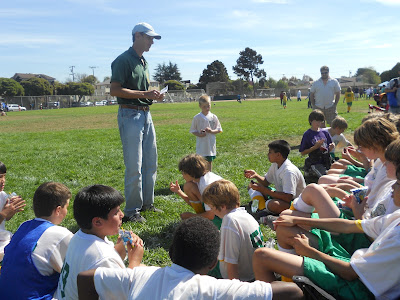 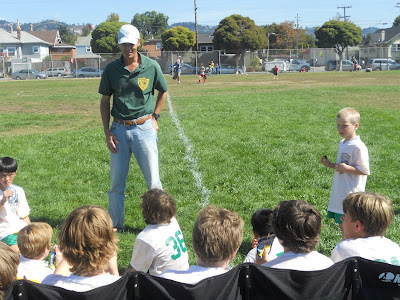 The snacks are presented. The team turns, preparing to close in. But wait - they hesitate -  if only for a second...their prey remains intact. They open ranks - and turn around to usher in Cy.

And so it is...Cy becomes one of the first to claim a snack.
Posted by About Last Weekend at 11:02 AM