Every two weeks I taste three wines under $10 for the East Bay Express.

This week we had reservations for a new-ish Sixties-inspired restaurant in San Francisco called Thermidor.

So in keeping with the evening's Mad Men theme I decided to go with the kind of wine Mad Men's Betty Draper would have chosen for one of her Round-The-World dinners.

Three wines from the same vineyard in Piemonte, Italy seemed to fit the bill for the evening. How nostalgic would they be? 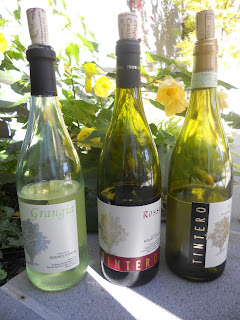 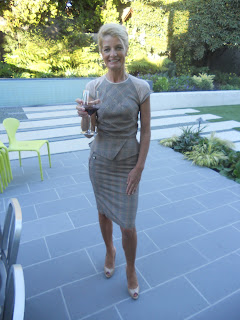 Betty Draper Picks
Sampling nostalgic wines from Piemonte.
By Jody Brettkelly
Last Saturday night, we had dinner reservations at a newish, Sixties-inspired restaurant in San Francisco called Thermidor. In keeping with the evening's Mad Men theme, for our pre-dinner tasting I selected the sort of wines Betty Draper would have chosen for one of her Round-the-World dinner parties.
Berkeley's Kermit Lynch (1605 San Pablo Ave.) does not have a huge selection of wines under $10, but the staff was very helpful and we found three wines from the same winery in Piemonte, Italy — Tintero.
As another writer points out, Elvio Tintero's wines are a staple of the Italian table, or tavola, "meant to be gulped and not sipped ... treasured for their simple elegance and loved for their price." His steep vineyards, first planted in 1946 in the Langhe, are in a rolling Italian heartland amid hilltop towns.
On one of the hilltops is the tiny town of Mango, both a former WWII resistance garrison and the 13th-century stronghold of shifting alliances between Alba and Asti. One writer visiting the secret passages from which the villagers escaped the sieges mused, "perhaps earlier generations of the Tintero family were there providing the fearful with libations."
The first wine we tasted was Moscato D'Asti 2009 ($9.95), which was pale gold and sparkling. It smelled of flowers. Mike said it was like a Prosecco, sweet and bubbly. We wondered if it was too sweet and too much like grape juice. Kenny was not a huge fan, but the rest of us felt it was a good wine to drink with dessert or on a hot summer's day.
Next came Grangia ($8.00), a white, also a little frizzante, with a bitter aftertaste. It was dry and very minerally. If you like mineral water, you will love this wine. Kenny found it was the most interesting of the three and that it cut the cheese perfectly. Ross disagreed, saying he disliked the mineral taste. "It's like quinine," he said. "Maybe you could use it to treat malaria."
The third Tintero wine we tasted, Rosso ($8.95), was a deep, rich red; we all thought it was going to be a heavy wine. But it tasted light and bright, with a red-berry juiciness like an old-style Chianti. Definitely the most quaffable of the three, and good with pizza or spaghetti.
So off we went into the night on our mid-century adventure, wondering just what that would entail. "Not sure" said Mike, "but it's not the Seventies yet, so no key-swapping involved!" Phew!
Posted by About Last Weekend at 11:01 PM