It's 2.30pm on a dreary Oakland winter Monday and I've just realised I got the departure time wrong for my two week trip to New Zealand. Apparently the plane leaves San Francisco Airport at 7.30pm instead of 9pm. So it turns out I have left my packing even later that I normally do. That's how jolly up to date this blog is. I am writing this as I pack. And more importantly, I still haven't done my spray tan. See how recent? Heck. (See even Keef below is like: "Wow") 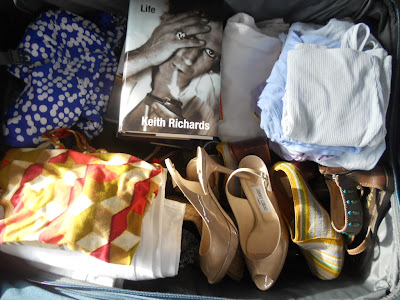 Remember I've already written about packing, just before we left for New York in the summer. The ultimate aim was to be the Strict Mistress of your Suitcase. Take charge. Be the Packing Samurai! I think we decided that the most important thing was to ensure you have the right shoes and jewellery and belts to go with your outfit. Otherwise it's not as much fun wearing things. We also decided we always pack for the vacation we aspire to rather than the one we're going to have, maybe we will meet the Queen, host the Oscars or be asked to star in a travel documentary. Must take tiara. Mind you as I've already said, my sisters Sharon and Pietra packed tennis racquets and ballgowns on the backpacking trip around Europe and actually used both many times... 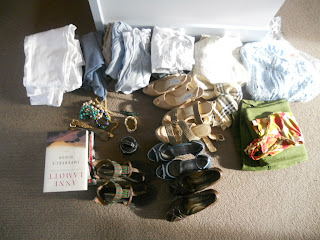 It being summer in New Zealand, I could just leave with new swimsuit in my little handbag and call in a day. You see, I could spend the next two weeks wearing my two younger sisters' clothes (Isn't that right, Mum?). Also would be more interesting blog read as I'd been wearing all new interesting outfits you've never seen. Makes sense to me.

Or I could just go with one "good" outfit, but dressing to go out is all part of the fun so that would be dull. In the end I overdid it, packed six pairs of pants including three pairs of white jeans, ten t-shirts, three complete going-out outfits, six pairs of high heels and four necklaces. I'm only going to take one handbag for some reason. Likely I will wear one pair of shorts and t-shirt with Haviana jandals (flip-flops) the whole time and will arrive back with the rest untouched. Speaking of jandals, I've just found seven Havianas in the mudroom, each without a pair. So looks like I'll be buying my eighth  pair of Havianas in New Zealand.

Meanwhile Tallulah, nine, with all the decisiveness of a nine year old, packed in five minutes and is all ready to go by the front door.

For the plane journey I've done a bit of a monochromatic beige, always ready to be called to First Class. But hang on...what if there is only one seat - should I give it to Tallulah, nine, who's travelling with me? Now that's a stressful thought. What would you do? 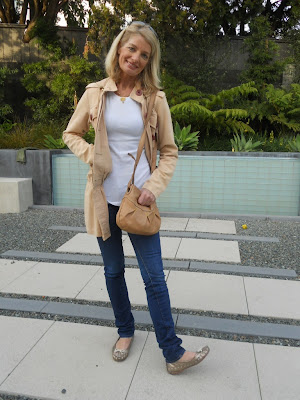 Oops still no spray tan.
Posted by About Last Weekend at 4:04 PM

Email ThisBlogThis!Share to TwitterShare to FacebookShare to Pinterest
Labels: Fashion For Grown-Ups