Yes, yes, another craven attempt to entice readers by using the word "sweaty".  Just following up on my New Years' resolution. And though our last few days in Ohope Beach were hardly frenetic, there was enough movement to create a certain mistiness, if not a drenching work-out. 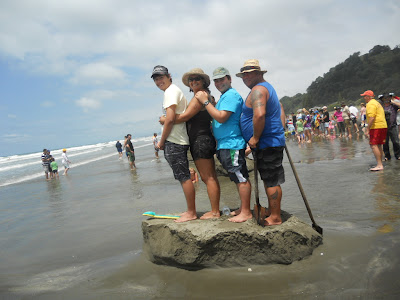 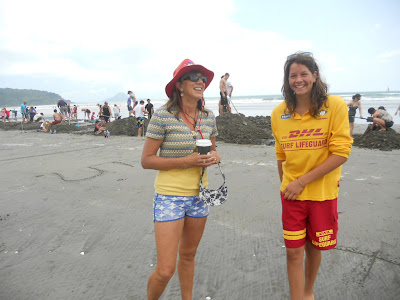 Firstly we found ourselves watching other active people at the Great Tide Race.  I had assumed, as one does, that it would involve intricate sand castle building and I had arranged to meet my old uni friend Cathy there.  But there was no castles just a race between ten teams to literally: pile up loads of sand, stand on top of the pile and battle against the tide. The last team standing wins.  Like watching paint dry? In fact Cathy and I stood for hours at the shoreline riveted. 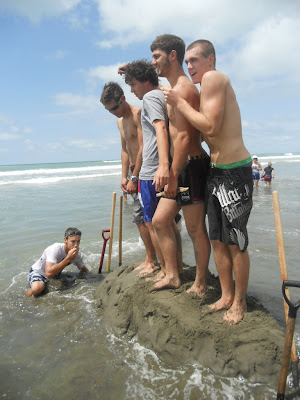 If you think this is because I'm a Kiwi and we are terribly simple folk getting our jollies (excitement) from watching blobs of sands disappear into the ocean, honestly you had to be there. 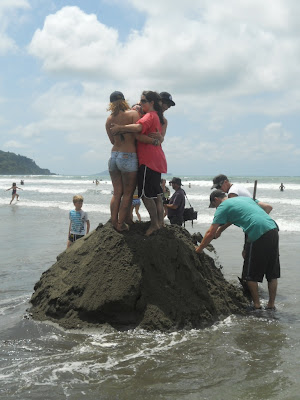 Four of the team balance on the sand pile while the others keep shovelling, scooping and patting. Then there were the rumbling, tumbling, screaming thrills when the tide comes in. The most heart warming sight was a group of older sporty boys all hugging each other to stay standing. My money was on the sporty boys, but the younger boys next to them did a slightly more complex ditch arrangement and won. Not convinced? Well next year you just have to come and see for yourself...Maybe we could make up a team. 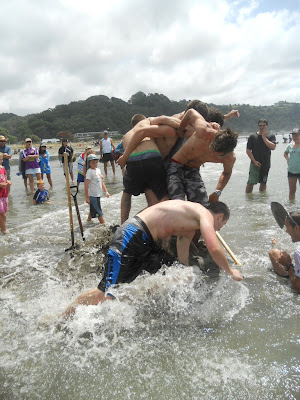 On the way down the beach we saw one of the new Kiwi Blokart thingies, rolling all over the beach at speed which looked incredibly fun. 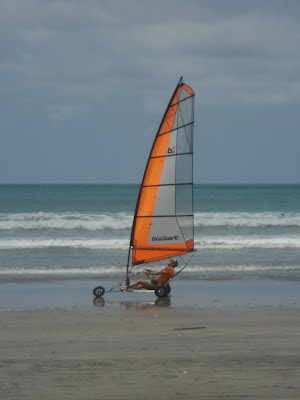 And the skatin, surfin, bikin kids who live on the beach and wheel it everywhere. 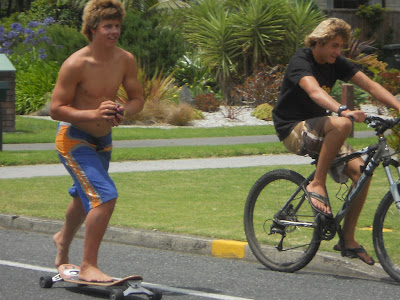 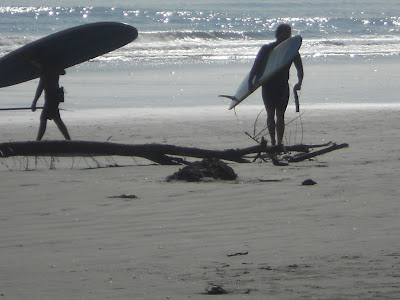 These guys were fueling up before they head out surfing again. What is one hiding behind his back, I hear your thinking. Just a burrito. 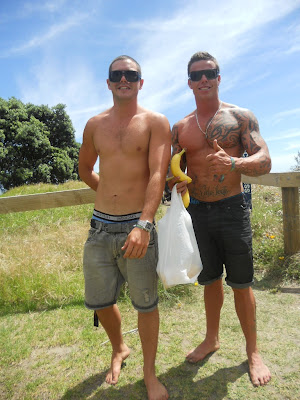 It was time for me to stop watching and do something so Dad, Pietra and I headed off for a three-hour bike ride. Kiwis take cycling safety seriously here and everyone wear bright vests - they need to as there have been scores of cycling deaths including one person killed by a motorist opening a car door.  The ride around Ohiwa Harbour featured loads more signs alerting us to dangerous this and that: bridges, School Bus Turning, rocks falling again and - watch out - you'll go all wervy swervy when it gets wet. 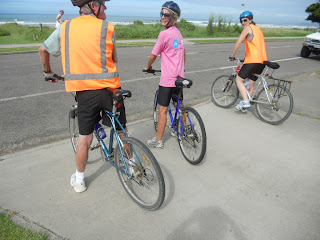 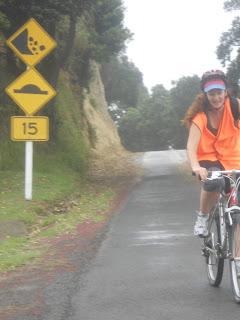 Again with the signs, this time on the secret, sweaty but quite silent steps over the hill to Otarawairere Bay. School children have drawn signs to deter dogs chasing kiwis and killing them. These kids have not mucked around with the message - in some of the pictures the poor Kiwi is totally bloody and mangled. My father walks these steps every morning and they are usually bustling with joggers, both serious and weekend warriors, but today noone is here. 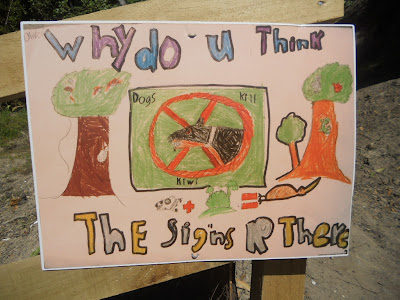 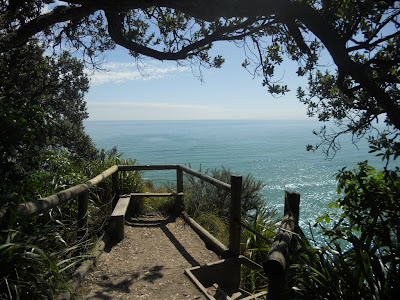 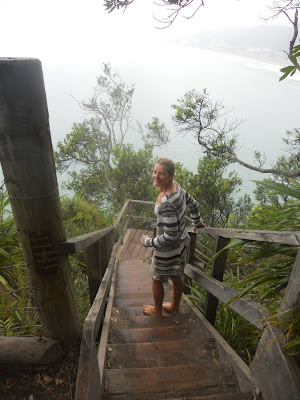 This has got to be one of the most beautiful staircase walks in the world, rain or shine. 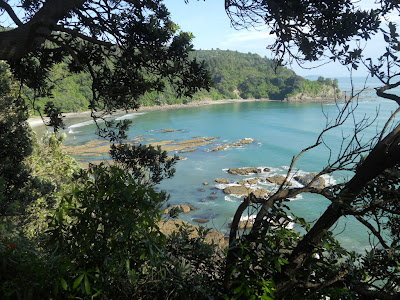 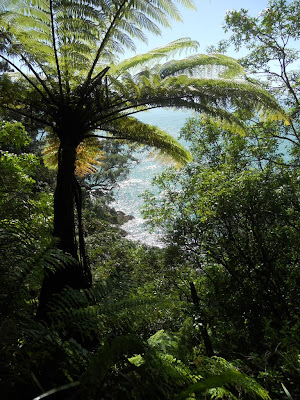 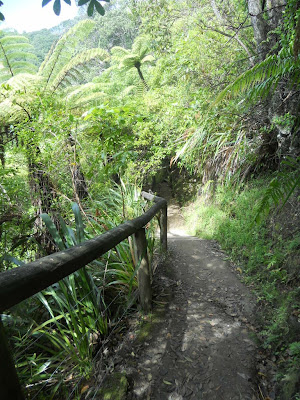 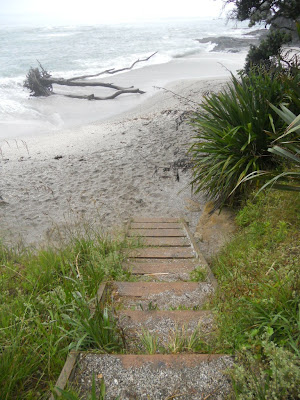 Then a quick fly down the coast with our friend "Amelia" of White Island Flights to do her early morning "Eye in the Sky" spot on the the local radio station 1XX letting everyone know about traffic, waves and boats. No sharks that we can see. There has been hilarious stories in the news here about whole schools of sharks swimming in very shallow water north of Auckland. One shark was even three metres long. The reaction of holiday-makers is bizarrely laid-back.  They were determined to get their swim in, blimin' sharks be blowed. "Yes I'm going in... not letting those sharks spoil my holiday"... "Don't care, just want to be swimming in the sea."

It was wonderful to be up in the air in a small plane. I have become so jaded about flying. My kids too have lost that sense of awe and wonder. I was reminded of the little six-year-boy behind us a couple of days ago on his first flight: "We're up in the sky, really flying. Oh, look at the sky -  so nice!" 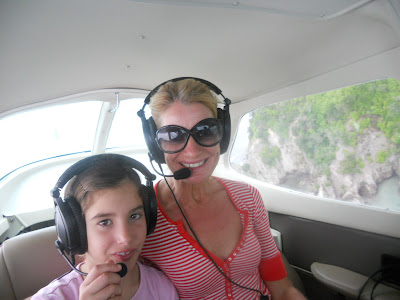 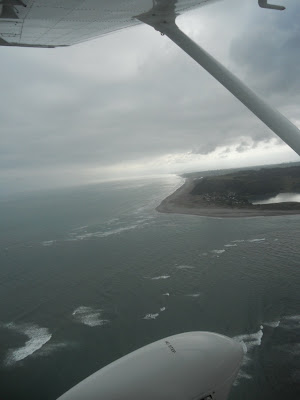 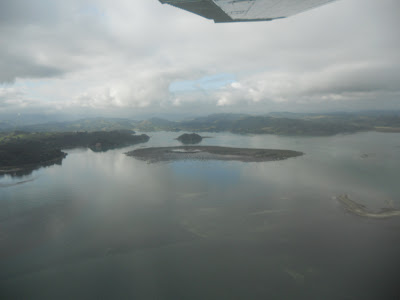 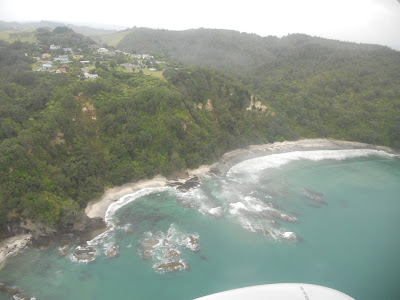 Phew, after all that activity I'm ready for a tranquil mosey around the big smoke as Tallulah and I head south for the Capital city of Wellington.


Join me tomorrow as I find out what it's like to road trip with nine-year-old.
Posted by About Last Weekend at 3:24 PM