We arrived in London the day after Will and Kate got hitched. This is a different city from the one I left nearly nine years ago: the sun shines on bright green parks and freshly painted everything. People are feeling kind of silly, singing in the streets, waving to each another and just being happy.

It's  impossible not to caught up in the dizzy gladness of it all. At our hotel bar in Park Lane we met the fabulous Marty Biland, 53, from Milwaukee who flew in with her husband Al to join the crowds in Hyde Park watching the wedding on the big screen. "There's nothing like it!" Marty enthuses over a G&T: "Nothing that comes close to this at home!" Below she's pictured on the day in her "fascinator." Who knew we would be bandying around a previously obscure term after learning that "hats or substantial fascinators" were required dress for wedding guests.

They're here because of thimbles. Marty started her thimble collection 22 years ago when they lived in Doncaster for three years.  When her husband recently accidentally broke a few, he promised they would return to buy replacements. When we met them they were exhausted after four days of constant celebrations and shopping, buying up commemorative shot glasses, dishes, trays and pillows for friends and family back home. 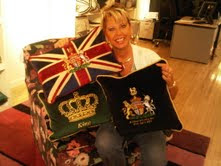 Most Londoners joined street parties or had one of their own. We headed over to see my friend Emma at her Notting Hill flat and sip tea from her souvenir cups, admiring the Prince William champagne, balloons and streamers left over from the party.

Meeting Kate and Wills at the British Airway counter in San Francisco was a tiny glimpse into the weddingmania that has taken hold of England.


The newspapers have been chocka with the nuptials and with 12 dailies and 12 more Sunday editions I have been in hog heaven. Most of the newspapers have attributed a joyful England to the "fun and frisky" Kate Middleton injecting new blood into the blues, though some of the sneering references to her common-ness have been bizarre.

Much has been made of her being "middle class." In fact her family have a huge mansion out in the country and she is from a very privileged upper middle class.

In the past Kate and her equally stunning sister Pippa have been termed the "Wisteria Sisters, pretty, sweet smelling and great climbers."

"Her parents have a tarmac driveway for God's sake!" snipes one source close to the Royals. Apparently one must have a gravel driveway to be properly posh or "Yew," a reference to the Yew trees grown on stately estates for centuries.

There was amazement from some about how Kate's stunning mother, Carol, a former flight attendant (horrors!) scrubbed up good on the day and didn't embarrass anyone. Apparently through the years Wills' friends liked to tease Kate about her mother's former profession. "Doors to Manual" they would laugh doing the flight attendant hand actions.

Well as one paper pointed out, Doors to Manual had the last laugh.  She not only looked perfect in her blue suit, overshadowing Camilla, but she also appeared gracious and graceful. Another member of the Middleton family also attracted much admiration. After all eyes in Westminster Abbey alighted on Kate's sister Pippa in her lean, white contoured bridesmaid dress, 67 tweets a second from Westminster Abbey almost crashed the Twitter website.

Meanwhile the so-called "proper royals" Beatrice and Eugenie looked like main characters in a pantomime in their kooky big hat get ups. As one onlooker said: "They may be blue bloods but there's no doubt who has class."

Posted by About Last Weekend at 3:24 AM